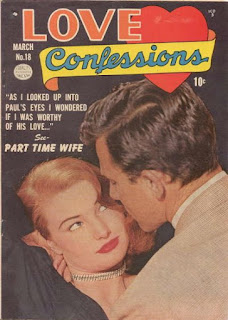 ﻿Putting my natural grumpiness aside, this weekend is all about love
and happiness.  Unfortunately, I’m just not getting that from Love
Confessions #18 [Quality; March 1952], which, of course, showed up
on newsstands in my birth month of December 1951.  Judging from the
titles of the four stories in this issue, its heroines were kind of
gloomy and/or kinky.

The cover is a photo cover, but I haven’t a clue to the identities
of the couple gazing into each other’s eyes.  I’m going to go with
Ryan Reynolds and Meryl Streep until someone corrects me.  As for
those story titles:

“Two Grooms for My Wedding” (6 pages)

The artists and writers of these tales have not been identified at
this time.  I’m going with Brian Michael Bendis and Jim Lee until
someone corrects me.

What makes me happy...

I’m proud of Vice President Joe Biden and President Barack Obama
for supporting equal marriage rights.  The sanctity of marriage is
not jeopardized by same-sex marriage.  The only thing at risk - and
it’s about time - is the bigotry and ignorance of those who oppose
it.  The dustbin of history awaits them.

Betty White has announced her support of President Obama.  As if I
needed another reason to love her.

Tom Batiuk, my friend, neighbor and occasional employer, has been
running a story in Funky Winkerbean dealing with a same-sex couple
wanting to attend their school prom.  While I am naturally appalled
by this war on the sanctity of prom night, I applaud Tom’s efforts
to bring diversity and tolerance to the comics pages.  He’s not the
first cartoonist to go there, but every time a mainstream creator
does this, he or she helps make it better.  It’s just a shame that
Obama couldn’t have waited until next month to state his support of
equal marriage rights.  Then Tom could have claimed the President
was influenced by this story.  Which I absolutely believe he should
do anyway.  It would still be a smaller lie than the ones we hear
daily from Fox News, the GOP, and the Tea Party.

When it comes to Facebook, one of my most satisfying activities is
posting remembrances of comics greats who are sadly no longer with
us.  These writers and artists have brought me so much joy over the
decades and it’s wonderful to read the comments from those sharing
my admiration of their work.

Most comics news sites are, to varying degrees, shills for the big
publishers.  That’s why I get so much of my comics news from Heidi
McDonald’s The Beat and Rich Johnston’s Bleeding Cool.  I consider
them the best journalists in comicdom.

MAD: The Idiotical is another of my favorite sites.  The magazine
has improved in recent years and this blog offers amusing snippets
from past and current issues.

Mike Serling’s Progressive Ruin is the several-times-a-week place
for the comics seller’s impish sense of humor.  This weekend, his
“Adam-12 Versus Satan” entry was comics brilliance.

Mark Evanier is one of my oldest and dearest friends.  I am ever in
awe of the range of his knowledge of so many things and his ability
to communicate it so well.  A day without News With ME is a like a
day without comics, show business, cats, french fries, and all the
other things that make life good.  Add his balanced and insightful
political comments and it’s indispensable.

I didn’t read romance comics until just before I broke into comics
and they didn’t last long after that.  Jacqui Nodell’s Sequential Crush
regularly increases by knowledge of the genre.

Snopes.com is my “go to” website when I want to refute the idiocy
people mass-mail to their friends.  The site does an terrific job
exposing the falsehoods.  Even more amusing to me is how some folks
get really upset when you point out that they’ve just lied to all
the people on their mailing lists.  They so wanted to believe that
crap was real.  Sometimes they remove me from their mailing lists
for being such a meanie.  I call that a win-win.

Super-Team Family: The Lost Issues is the creation of a genius name
of Ross.  Every weekday, Ross posts a new faux-cover showing one of
“the greatest team-ups that never happened, but should have.”  The
Justice League and Stan Lee.  Metamorpho Vs. Thor.  Phoney Bone and
Uncle Scrooge.  This is online treasure.

Politics angers and depresses me so much that the only “news shows”
I watch are The Daily Show with Jon Stewart and The Colbert Report.
But, every now and then, I watch The Rachel Maddow Show because she
is the best of the rest.  Thankfully, for those frequent times when
I can’t bring myself to watch political news and commentary, I can
go to The Maddow Blog.  It’s like having this terrific commentator
on speed dial.

Call them comics detectives or historians, but I enjoy reading the
blogs of researches who do their work with clean hands and without
set agendas.  My favorites include:

Of course, for sheer fun, there’s nothing like
Mike’s Amazing World of Comics. Which is where
I get the covers that lead this bloggy thing most days.

Naturally, no listing of great comics information sites would be
complete without a mention of the Grand Comics Database.  Which is
simply the most mind-boggingly useful comics site in the universe.
I couldn’t write half of the blogs I write without frequent visits
to that excellent repository of knowledge.

I hope you’ve enjoyed this weekend of bloggy thing love.  I’ll be
back tomorrow and in the days to come with more news, reviews and
views...more online favorites...and your basic more stuff.