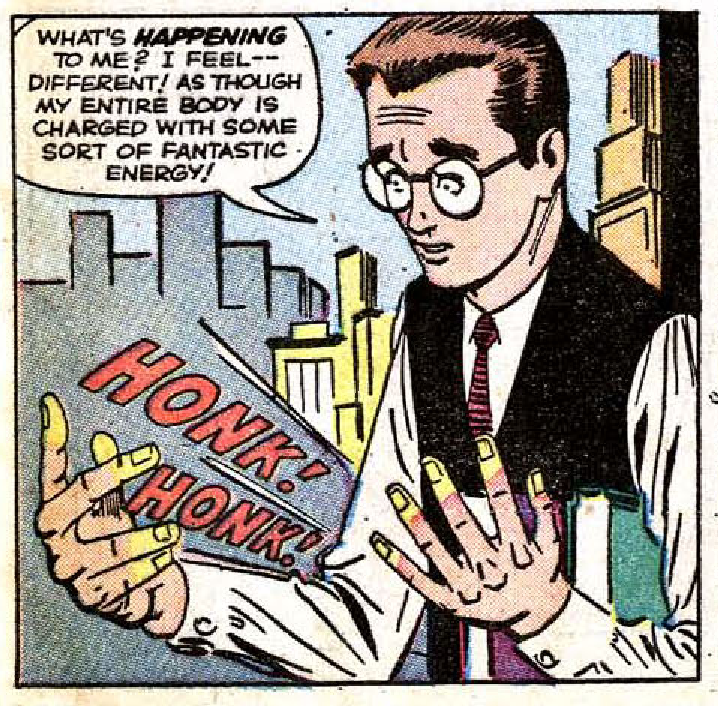 Veteran readers of this bloggy thing will remember I devoted many bloggy things to comic books that hit the newsstands in December, 1951, the month of my birth. That was a very important month in my comics career on account of if I hadn’t been born, I would not have had a comics career.

The next important month in my comics career was July, 1963.  Why was that month so important? To explain that, I am reprinting this classic blog entry from two whole years ago.

My parents weren’t happy with my spending my “souvenir money” on a whole lot of comic books.  I figured it was my money and I should be able to spend it as I liked.  Reading those comic books was how I dealt with the tedium of the long drive.

When we got to the town where our relatives lived, we stopped by a cigar and magazine shop owned by my father’s uncle.  I headed for the comics display, but my parents got between me and the comics. Not wanting to have a scene in the store, they told me I could buy one and only one more comic book.  That would be it for the rest of the trip.

If I could only buy one more comic book, then, defiant little cuss that I was, I was going to buy one that cost a quarter.  The flaw in my plan was that I already had the DC annuals on the display and I wasn’t at all interested in the Archie or Harvey giants.

Then I spotted Fantastic Four Annual #1.  I had only read one issue of Fantastic Four prior to this, the issue with Kurrgo, Master of Planet X.  I hadn’t like the issue at all.  It was unnerving to see super-heroes fighting with one another in much the same manner that I fought with my siblings.  Kurrgo looked like a sickly potato man. The art didn’t look as “clean” as DC super-hero art.  And, even at that age, I realized someone had screwed up the end of the story by mixing up “enlarging” and “shrinking.”

None of that mattered to me in the smoke shop.  I was a man - okay, a boy - on a mission.  I didn’t care if that annual was any good or not.  I was going to show my parents I could outsmart them, even if it was only in this minor way.  I bought the annual.

Fantastic Four Annual #1, as I’ve proclaimed on numerous occasions, is the greatest comic book of all time.  It was 72 pages of sheer excitement and wonderment.  I read it several times that night and several more times on the rest of the trip.  I didn’t reread any of the other comics I had bought.

At 37 pages, the annual’s “Sub-Mariner Versus the Human Race!” was the longest comic-book story I had ever read.  Sub-Mariner invades New York City.  A deathly ill Reed Richards seems helpless to stop him and his forces.  Namor takes Sue Storm prisoner.  We learn the history of Atlantis.  Action and human drama with great characters. What an epic!

The other features drew me more into the young Marvel Universe as I read the origin of the Fantastic Four, their meeting with Spider-Man, informational pin-up pages of the FF’s villains and question-and-answer pages with the heroes.  I studied the annual’s amazing diagram of their Baxter Building headquarters.  A brand new world opened up for me.

Back in the real world, we were spending the night in the “family cabin.”  It was a large cabin with a huge common area, a kitchen, and several bedrooms above the open common area.  It was not in the best of shape, as I recall, and there had been critters of varying kinds residing in the cabin whenever humans weren’t there.  Maybe even while humans were there.

My three siblings and I slept on cots in the common area.  Despite the unfamiliarity of the place, we all slept soundly, exhausted by the long drive.

I got up at the crack of dawn.  While the rest of the family slept on, I grabbed my small stack of comic books and went to the porch. But the only one I wanted to read in that lovely woodland solitude was Fantastic Four Annual #1.

I knew comic books were written and drawn by adults.  The credits for Stan Lee, Jack Kirby and Dick Ayers didn’t reveal that to me, though the DCs of the day lacked such recognition for their writers and artists.  However, reading that comic book that quiet morning, it suddenly hit me that writing and drawing comics were all real jobs.  Butcher, baker, comic-book maker...and I knew what I wanted to be when I grew up.

I enjoyed the rest of that vacation.  We went to the Baseball Hall of Fame in Cooperstown, New York.  I loved both the Museum and the town.  I’ve visited a few times since, and, every time, there has been something new to excite me and the familiar charm of the area to soothe my oft-contentious spirit.

In case you were wondering, I did have money left to buy a couple Hall of Fame souvenirs.  I couldn’t tell you what I bought or where they ended up over the years.

Sad to say, I don’t have my original copy of Fantastic Four Annual #1.  It went missing somewhere along my several moves from here to there and there to here.  I bought a copy in much better condition over two decades ago and cherish it to this day.

******************************
In 2012, I dabbled in the comic books of July 1963 and wrote about several of them.  However, this time around, I hope to acquire and read every one of the month’s comics before writing about them. A few are well out of my price range - it’s the month of Avengers #1 and X-Men #1 and several other expensive Marvel and DC issues - but I started gathering these books late last year and already have most of the ones I need for the next couple months.

I’ll be back tomorrow with a brief overview of the comic books of July, 1963. See you then.

Posted by Tony Isabella at 2:46 AM