WE'LL GET THROUGH THIS

These are difficult times. I've spent the last few days trying to reconfigure my schedule to prioritize work that has the best chance of actually being published or of appearing somewhere. Once I get that sorted out, I hope to post new content in my blog and my other online venues. I'll also have suggestions to what you can post to entertain your fellow Tony friends here and elsewhere. Keep watching.
Posted by Tony Isabella at 5:23 PM 6 comments:

Tonight, following the Black Lightning season finale, from 10:10 to 11:10 EST, I will be going live in Tony Isabella's Authentic Black Lightning Group to answer questions about my appearance in the episode, the amazing last day of filming for the season and more.

The catch is that you must be a member of the Authentic Black Lightning Group to ask questions. The administrators and I will be approving memberships as quickly as possible during the day.

To join the group, go here.

Spread the word and tell your friends about this group. If all goes as planned with tonight's session, I'll be going live in the group every Monday night from 9-10 pm EST. Except when I'm on the road.

Hope to see you in the group tonight and every Monday night in the future.
Posted by Tony Isabella at 7:04 AM No comments:

THINGS THAT MADE ME HAPPY IN FEBRUARY 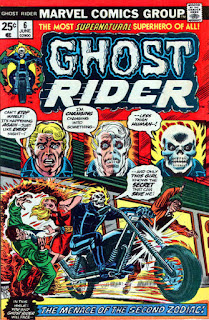 February was an extraordinary month for me. Early in the month, I wrote the introduction for Marvel Masterwork: Ghost Rider Vol. 2.
I continued my campaign to be elected to the Central Committee of the Medina County Democratic Party. I also attended my first event of my campaign, a New Hampshire Primary Watch Party held at the way cool Geeked Out bar and grill in nearby Brunswick.

I appeared on the very popular Cribbs in the CLE talk show, hosted by former Cleveland Browns player Josh Cribbs and his amazing wife Maria. Josh is a comics fan and he was geeking out over meeting me the way football fans geek out over him. The show went well and it seems likely I’ll be back.

Talking about my comics career, Black Lightning and my cameo in the season finale of the Black Lightning TV show, I was interviewed by The (Medina) Gazette (front page, above the fold) and the Brunswick Sun-Times (front page of the second section, top of the page). Not to worry, all I would tell them about the season finale was that I didn’t flub my lines and that the episode was amazing.

We’re replacing all the carpeting in our house with wood flooring. In February, we cleared our living room, painted it and got the new floor installed. We’re still moving stuff back into the room. Two rooms down, five or six to go.

In preparation for Pensacon, I was one of the judges for the con’s short film festival. When I got to the convention, I was on one of the Gulf Coast CW’s news shows and was interviewed by the Pensacola News Journal. I was particularly pleased with the live appearance. I was supposed to be on for three minutes, but the produced thought I was so good I got almost another two minutes of air time. Gosh, I wonder if some comics publisher will ever figure out how much of an asset I could be for them.

Pensacon itself was, as usual, one of the best conventions around. It’s my favorite event and I recommend it to all. I’ll have a few more specific comments as we look at the things that made me happy in February... 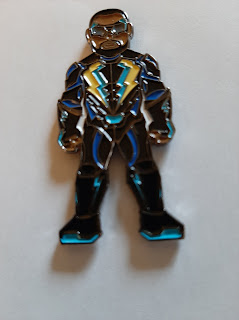 February 1: The new Black Lightning pin from Fansets. This one is based on the character as portrayed by Cress Williams on TV. It’s amazing and it’s only $6.95.

February 2: My Social Justice League of Everything has welcomed two new members: Betty Boop and Pudgy.

February 3: The Isabella renovations continue. Our upstairs living room has been painted. We’re currently awaiting word on when that room’s new flooring will be laid.

February 4: The February 3rd episode of Black Lightning showed my creation at his best and (hint, hint) showed what he would really be like leading a team.

February 5: Hair Love, the Oscar-nominated short film by Matthew A. Cherry. A funny, heartwarming story that brought happy tears to my eyes. Watch it here.
February 6: Arrow. The series finale was a satisfying end to this pivotal super-hero series. Given my own reaction, I suspect there wasn’t a dry eye on the set as the actors filmed their last scenes. 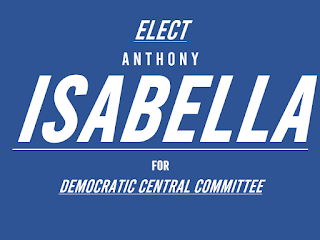 February 7: My “Vote for Me” yard signs have arrived and they’re gorgeous. We need to wait for a break in our truly snowy weather, but they’ll start showing up on lawns next week.

February 8: Briarpatch. Great to see Rosario Dawson, another of my Luke Cage favorites, starring in this quirky crime drama on the USA Network. The subplot about escaped zoo animals is especially tasty.

February 9: Svengoolie airing Son of Kong on February 8th. He treated that underappreciated sequel with respect and a dollop of humor while including fascinating facts about the film and its cast. Well done, sir.

February 10: That moment during the Oscars when Joker was announced as a nominee in the “Writing/Adapted Screenplay” category with Bob Kane, Bill Finger and Jerry Robinson all named as the source of the original material.

February 11: No other TV drama packs as much story and character moments into an hour than Black Lightning. The January 10th episode was one great scene after another. 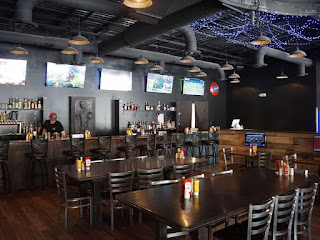 February 12: Geeked Out bar and grill in Brunswick, Ohio. My son Ed and I were there for the New Hampshire primary watch party. I can’t wait to go back there. Any area fans want to join me for lunch in the near future? 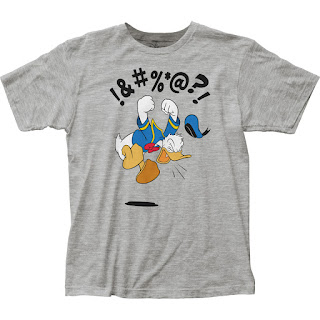 February 13: Donald Duck is my spirit animal and, thanks to Stylin Online, I now have the t-shirt to prove it.

February 14: My Lord and Master Godzilla will keep me warm with his fiery atomic love...and this cool quilt. 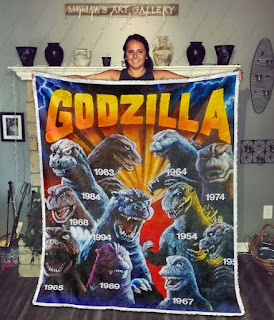 February 15: Christopher Ammanuel, who plays TC on Black Lightning. His character has proven incredibly useful and his performances as that character are outstanding. He should be upgraded to a series regular next season.

February 16: Tanktop, a mad robot from the future in Combat Colin #2 by Lew Stringer. What a great name! I wish I had thought of it first.

February 17: Grape. Since I gave up Pepsi, Snapple and fruit juices in general, my low blood sugar salvation has been the grape flavors of Crystal Light and Propel.

February 18: The Black Widow. I love Natasha Romanov and I cannot deny that any longer. Of all the characters I’ve written, she’s one of the few I would love to write again.

February 19: Appearing on Cribbs in the CLE. Hosts Josh and Maria Cribbs are fun, feisty, smart and relatable. My segment went well and the show wants me to come back. 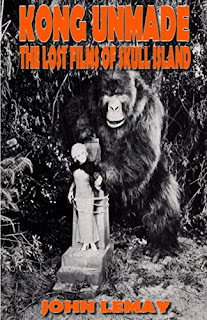 February 21: Brooklyn Nine-Nine: Vanessa Bayer is hilarious as the exceedingly odd Officer Debbie Fogle. I hope she stays around the 99 for a long time.

[NOTE: Alas, following the events of an episode titled “Debbie,” I don’t think the delightful Bayer will be showing up again for some time. But she was grand in her appearances.]

February 22: Omnibus editions. I don’t have time to read them, but they are my hedge against depression if my work dries up. I want to buy a really stylish book stand so I can read them while standing. A man needs a dream, right?

February 23: As Meg on The Unicorn, Nicole Byer was hilarious. That show’s cast is already ridiculously funny, but I’d love to see Meg return often. 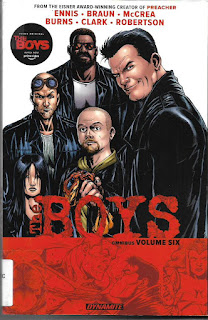 February 24: The Boys by Garth Ennis, Darick Robertson, Russ Braun and others. Reading the six Omnibus volumes was challenging, gut-wrenching, heartrending and scary, sometimes all at once. I’d rank it was one of the best comics epics of our time.

February 25: The (Medina) Gazette ran a great front page article on Black Lightning, my comics career and my upcoming cameo in the TV show’s season finale. Above the fold and continued at length on an interior page. Have received many nice comments.

February 26: Comic Book Resources: “Tony Isabella and Eddy Newell Had Black Lightning Tackle the Pain of Living” by Brian Cronin, far and away the website’s finest writer and incredibly perceptive. 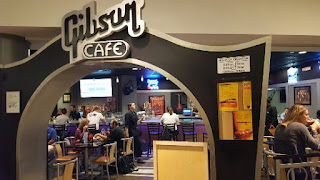 February 27: Saintly Wife Barb and I enjoyed our Nashville Airport layover at the Gibson Café. Good food, reasonable prices and fine singing from the terrific Britney.

February 28: Pensacon 2020. Returning to my favorite convention for the fifth time in a row was everything I expected. Great treatment from Mike Ensley and his crew. Wonderful fans. Interesting panels. I’ll likely me gushing about the event for days to come.

That’s a wrap for February. My next goal is to catch up on writing about all my recent travels. That would including going to Atlanta to appear in the season finale of Black Lightning and to visit the set in Decatur for the last day of filming for the season...and attending my fifth Pensacon in a row.

Posted by Tony Isabella at 8:36 PM No comments: 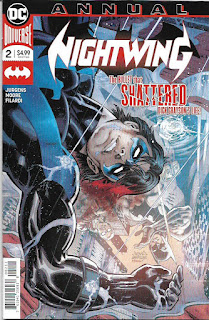 This week in TONY'S TIPS at Tales of Wonder: Some thoughts on Dick Grayson plus my reviews of Bakemonogatari, Planet of the Nerds and Dark Red by Tim Seeley and Corin Howell! 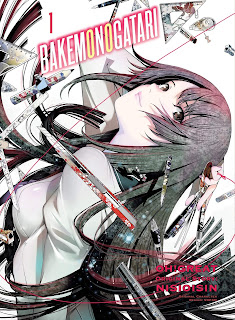 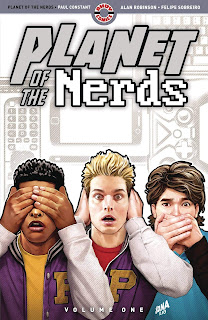 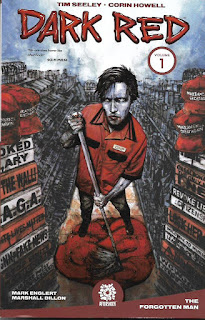 Posted by Tony Isabella at 9:37 AM No comments: