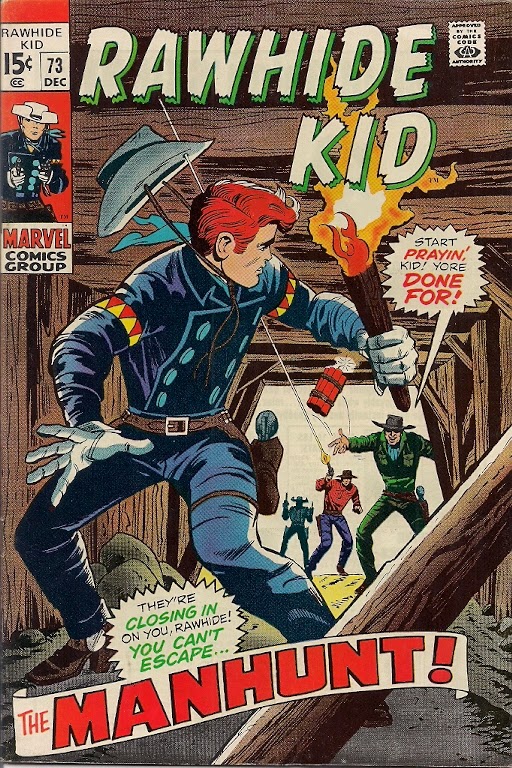 The Rawhide Kid is my favorite western comics character and one of my favorite comics characters period.  Something about the short of stature (but big on courage and fighting skills) Johnny Clay spoke to the short of stature (but big on comics-reading skills) teenage Tony Isabella.  After rereading the Kid’s earliest adventures when Marvel Comics reprinted them in a pair of Marvel Masterworks and an Essential Rawhide Kid volume, I wanted to reacquire every Rawhide Kid comic, reread them and write about them in this bloggy thing of mine. This is the 58th installment of that series.

The Rawhide Kid #73 [December 1969] has another swell cover by the team of Larry Lieber (pencils) and Mike Esposito (inks). I had to laugh at the copy at the bottom of the cover because, in the story itself, it’s the Kid doing the manhunt stuff. I probably purchased this comic while I was attending John Carroll University on the far east side of Cleveland. I lasted about seven months at the Jesuit-run institution, long enough for me to write a few pieces for the school newspaper, host one school radio news segment, date one of my teachers and come to the conclusion that the Jesuits who ran the place were arrogant jerks. Needless to say, they have never offered me a honorary doctorate.  But I digress.

“The Manhunt!” (20 pages) is written and drawn by Lieber with inks by John Tartaglione. Lieber is really on a roll with the title as the 1960s draw to a close. This story is a grim and gritty look at the chasm between the life Johnny Clay cherishes and the far darker one he must lead.

The story opens with Johnny planning to stay a few days in a small town in a territory where he’s not wanted by the law.  The sheriff recognizes him as the Rawhide Kid and orders him out of town just as rancher Tom Harrison and his wife ride into town.

Mrs. Harrison remarks on the Kid’s resemblance to their late son. The Harrisons intervene with the sheriff and offer Johnny a job on their ranch. The sheriff thinks they’re making a mistake, but it’s a chance they are willing to take.

Johnny quickly becomes part of the ranch. He pulls his own weight which impresses the Harrisons and their foreman. He usually takes his evening meal with the older couple. Tom is looking forward to teaching the young man chess. The Kid begins to think - this time - he’ll be able to put away his guns forever.

Tragedy strikes in the form of cold-blooded murder. Returning from town with the ranch’s monthly payroll, Harrison is ambushed by four outlaws. When the rancher tries to defend the payroll, the outlaws shoot him dead. A young boy is witness to the killing, but is not spotted by the murderers.

When Tom’s horse comes home without him and when Mrs. Harrison sees her husband’s saddlebag is missing, she and Johnny fear the worst. It’s Johnny who finds the body of the slain rancher.

The funeral is a small one. As Mrs. Harrison and his fellow ranch hands bow their heads, a grief-stricken Johnny reflects:

He was a kind man, who treated me like a son! Why...why did it have to happen to him?

The sheriff rides up with news. They got descriptions of the four killers from the boy. They formed a posse, but the outlaws escaped beyond the territorial limits where the sheriff has no jurisdiction to go after them. That doesn’t faze Johnny:

Sheriff, I don’t give a hang about territorial limits. A good man is dead...and those who killed him must pay for it!

The ranch hands are startled.

Did you see the look in his eyes–-so cold and menacing!!

Yeh! He must’ve really cared for the old man!

Johnny comes out of the bunkhouse with his guns on. Mrs. Harrison tries to talk him about of going after the outlaws. She fears she will lose him as well. He tells her:

You’re forgetting one thing! I’m not just Johnny Clay...I’m also the Rawhide Kid! And what I’m fixin’ to do, I do better than anyone else.

The Kid was the Wolverine of the Old West.

The sheriff is happy to give Rawhide the descriptions. After “days of hard riding,” the kid gets a lead on one of the outlaws, said to be heading for the town of Gopher Gap. The outlaws have split up, but the grim young gunfighter vows to get them all no matter how long it takes.

A bartender tells the Kid the man he’s looking for is Rafe Jordan, “as mean as they come!” A friend of Jordan’s overhears this and he rushes to the hotel to warn the outlaw.

Jordan grabs his rifle. He figures to drop Rawhide from his hotel room window. But the Kid spots the glint of the rifle in the window and fires first. Jordan falls from the window, mortally wounded. Seeking to clean the slate with his last breath, Rafe tells Rawhide who the other bandits are and where they went after they split up.

Outlaw #2 is Moose Lawson, working as a blacksmith in Eureka Flats. Rawhide plans to take him in to stand trial, but the town’s lawman isn’t having any of that:

Well, I don’t know which of you is tellin’ the truth, and which is lyin’...but I do know that Moose has never been in trouble before while the Rawhide Kid is wanted by half the lawmen in the territory! So unless you can prove your accusation, Kid, you’d best leave Lawson alone!

This being before the emergence of anti-stalking laws, the Rawhide Kid decides to work on Lawson’s guilty conscience. He sits across from the blacksmith shop for hours, just staring at Moose. Wherever Lawson goes, the Kid follows. Moose can’t even eat in peace because the Kid is always watching him. Before long, even the wind hitting his window rouses Lawson from his restless sleep.

Lawson snaps. He attacks Rawhide in the street, knocking him to the ground. Oh, it’s on and, two pages later, the beaten Moose admits to his role in the robbing of Tom Harrison. He didn’t kill the old man, but he didn’t stop the killing either. The town’s sheriff is listening to it all:

I’ll take Moose in...and deliver him to the law in the territory where the crime was committed!

Outlaw #3 is Les Cooper, who bought an old mine in the hills and is working it for gold. Rawhide goes to the mine, not knowing Cooper knows he’s been tracking him.

Cooper has set a trap for Rawhide. Inside the mine, the Kid sees a bundle of lit dynamite. Shooting the fuse from the dynamite, Johnny  charges out of the mine. Cooper tries to out-draw the gunfighter. Rawhide fires and severs Cooper’s holster from his belt. That makes three down and one to go:

There’s the town where I’ll find Blackie Yates, the last member of the gang! He’s the one that I’m after most! The one who shot Mister Harrison!

To beat the Rawhide Kid, the frightened Yates enlists his kinsman Jake. This is not a close family because Jake changes the payment terms from half of Blackie’s loot to all of it.

Rawhide rides into town and finds himself between Blackie and Jake. Whichever one he faces, the other will shoot him in the back. The bad guys are a mite overconfident.

The Kid drops to the ground as Jake fires and Blackie gets gunned down. Before Jake can fire a second time, Rawhide fires and sends  Jake to join his relative in Boot Hill.

The manhunt’s over. Tom Harrison has been avenged. Justice has been served. All that’s left is for Rawhide to return the payroll to the ranch and break two good hearts.  Check out the addendum to today’s blog to read the emotional final page of this fine story.

“The Manhunt” has never been reprinted in the United States. That’s a shame because it’s further and compelling evidence as to just how good a writer and artist Lieber was.

The “Marvel Bullpen Bulletins” is a mere half-page this time around with the remainder of the page featuring an ad for the Marvelmania International membership kit. There are only two news items in the truncated bulletin page. The first announces the untimely death of artist George Klein.  The second item explains Archie Goodwin has been too busy writing newspaper strips to do any stories for Marvel, but that the company is hopefully he’ll be writing for them again soon.

Marvelmania? For $2 (including shipping), you got a jumbo poster, a color catalog and a decal sheet.

The “Riding the Trail with Rawhide” letters page had three letters and three panels from past issues. Norm Severud of Durango, Mexico asks how Johnny Clay got his start and the Marvel person answering the letters gives him a three-paragraph origin summary.

Commander Michael Sullivan, based out of San Francisco, has praise for Rawhide Kid #69 (“The Executioner”). Greg Mulconery of Sylmar, California thinks #71 (“The Last Warrior”) was one of the better issues in the series.

The classified ad pages included ads from Comic Sales of Brooklyn; Robert Bell of Hauppauge, New York; Howard Rogofsky of Flushing and Grand Book Center of Brooklyn. For four bucks and a photo of your own heroic self, readers could buy a giant size 2 feet by 3 feet comic-book cover with said photo on it. As a poor college student, I didn’t have four bucks to spare.

That’s it for this edition of Rawhide Kid Wednesday. I’ll be back tomorrow with something different.

Posted by Tony Isabella at 7:02 AM