THIS AND THAT BUT MOSTLY THAT 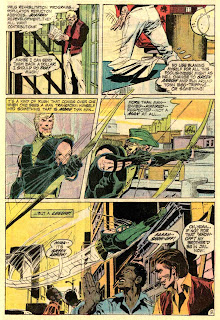 There’s a panel from Elliot Maggin’s classic “What Can One Man Do?” [Green Lantern/Green Arrow #87; December 1971-January 1972] that is often in my thoughts. Former billionaire Oliver Queen is picking up his mail at the modest apartment building where he now lives. His mail consists mostly of donation requests. Perhaps from causes he once donated to generously when he was rich.

OLIVER: “Drug rehabilitation programs, population reduction agencies, Biafran redevelopment. They all want contributions. Maybe I can send them each a dollar. I should do that much.”

Figuring inflation, that dollar would be worth six dollars and some change in 2019. Still not a great deal of money, but I could feel Oliver’s frustration at his limited resources. I can emphasize with it because it’s how I feel nearly every day of my life.

When I was making better-than-decent money writing for newspaper features and comic books, when I was receiving far more frequent royalty payments than at present, I was able to afford to donate to a many worthy causes: Planned Parenthood, the American Civil Liberties Union, Southern Poverty Law Center, LGTB organizations, veterans organizations, the NAACP, animal protection organizations, individual fundraisers created by Facebook friends and more. I felt good about being able to help others. I feel lousy now that I don’t have the means to do so.

I’m working as hard as ever. My work is as good or better than it ever was. But I’m not getting the jobs that pay as well as writing for DC, Marvel and newspaper strips. That makes me sad.

I made a pledge to myself that, should I again get those kinds of high-paying jobs, I will “tithe” 10% of each check to the causes I used to support so freely. I don’t expect this to sway any of the seemingly countless editors and publishers who don’t hire me. It’s a pledge I made for myself because I haven’t lost hope that those kinds of jobs will come around again. If I’m fortunate enough for that to happen, I will owe the universe a debt.

I can’t recall if the current DCU Green Arrow is rich or not. It’s been a while since I’ve read his title. Whatever DC has done with him, I hope he’s retained his charitable nature. That looks really good on a super-hero. 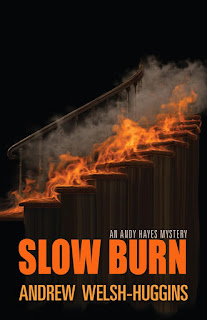 A couple months back, I wrote about Fourth Down and Out, the first in the Andrew Welsh-Hughes series about Andy Hayes, disgraced Ohio State University football player turned private investigator. I’ve just read the second novel in the series.

Like the first book, Slow Burn [2015] relies heavily on coincidence and convenience. Hired to investigate the possibility a convicted arsonist was actually innocent of a fatal blaze he was found guilty of setting, the case ends up involving fracking companies and drug gangs. The pieces fit together because the author says they all fit together.

Still...I enjoyed Slow Burn. Andy Hayes is a protagonist working clumsily towards redemption. I want to see if he makes it.

When I read Fourth Down and Out, I asked my son Ed, the biggest OSU football fan I know, if the people of Columbus, Ohio would really continue to vilify Hayes a decade after he threw a game. Ed assured me that would be the case. In the climax of this book, Hayes does something undeniably heroic. I asked Ed if the act would change how his detractors see Hayes. With a shrug, he responded maybe half of them would. Columbus is a tough town. 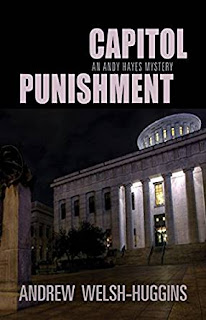 This bloggy thing is being written over a long period of time. In that period, I read Capitol Punishment [2017], the third Andy Hayes mystery by Andrew Welsh-Huggins. This time around, Hayes is hired to bodyguard a political reporter who’s made a great many enemies.While the political intrigue made me think Welsh-Huggins was trying too hard to remain bipartisan, I was pleased that this book doesn’t have different cases that are somehow connected. I was pleased that the “B” case resulted in the introduction of a new character who’ll be a valuable asset to Hayes in this and presumable future novels.

I’m no longer on the fence here. I’ll continue reading Andy Hayes mysteries as long as Welsh-Huggins writes them. 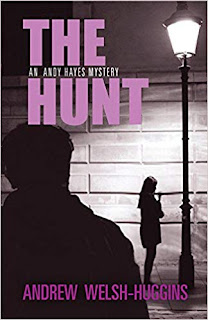 Did I mention this bloggy thing is being written over a long period of time? Because, since I wrote the above paragraph, I’ve read the fourth Andy Hayes mystery by Andrew Welsh-Huggins. The hyphenated author should thank me for all this coverage.

In The Hunt [2017], a serial killer is stalking prostitutes in Columbus. Hayes is hired to find a missing prostitute by the woman’s brother. This brings him into contact with a local congresswoman whose key issue is ending human trafficking and also the usual nasties that show up as part of a private investigator’s cases. Helping Andy on this particular case is former prostitute and current church worker Theresa,  introduced in a previous novel.

Hayes doesn’t have the easiest life. He’s constantly at odds with two ex-wives as he tries to remain an important part of his sons’ lives. The demands of his job causes some very rough bumps in his relationship with university teacher and single mother Anne. Yet, though he might be a knight in the tarnished armor of his past and sometimes unsavory career, Hayes is still a knight. Always trying to do the right thing even when that has negative consequences for his happiness and life.

Welsh-Higgins continues to rely somewhat heavily on coincidence in this book, but I’m not invested in the series for mysteries. As with most cop/detective TV shows, I generally figure out who done it well before the story reveals it. I’m here for the characters. When they succeed, it cheers me. When they don’t, often because they’ve chosen to do that right thing, I sympathize with them. Doing good is no guarantee of happiness. Understanding that, making characters come to life makes The Hunt the best book in the series. Kudos to the author.

Speaking of coincidence, I just got the fifth Andy Hayes mystery from my local library system. But you’ll have to wait a while for my comments on that one.

Posted by Tony Isabella at 7:39 AM