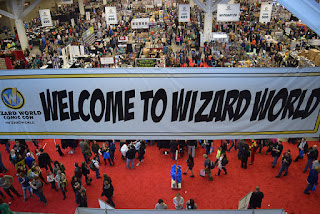 Saturday was, as it usually is, the busiest and most fun day of the convention. I signed a bunch of Isabella-written comics and books. I handed out lots of fliers promoting Marvel Masterworks: The Champions and Black Lightning Volume One. I got to chat with old friends and make some new ones. I appeared on three panels.

Best of all, in a rare alignment of our weekend schedules, Sainted Wife Barb was able to come to the convention. She was joined by our son Eddie, our other daughter Giselle and some friends of Giselle. Unfortunately, our actual daughter Kelly was working an extra shift at her First Merit job, so she couldn’t be with us.

Barb had a ball at the convention. She loved checking out all the vendor booths. She enjoyed several panels with Eddie, Giselle and our friends. She especially enjoyed the panel with Cleveland’s Joe and Anthony Russo, who directed Captain America: The Winter Soldier and other Marvel movies. I was envious of her being able to attend that panel. Between the panels I was on and spending time behind my Artists Alley table, I never got a chance to meet the Russo brothers. I have to figure out how to make time to meet at least some of the celebrity guests at future shows.

As I mentioned in yesterday’s bloggy, Wizard World’s inclusion of so many different fandoms with their attendant crafts and trinkets makes their conventions fun for family members who aren’t into the same things you are. One woman I spoke with was thrilled that she got to meet Henry Winkler. He’s one of those celebrities I wish I had made the time to meet because I’ve loved so much of his movie and TV work over the years.

There were vendors selling fan-related fashions. Various businesses and fan organizations were set up at the show. You could buy great coffee and other delicacies. In the latter category, my favorite - and that of many Wizard attendees - was Wild Bill’s Olde Fashioned Soda Pop Company. For $25, you could buy a really cool campfire mug emblazoned with the Wizard World log. Then, all weekend long, you could return to the booth to get free refills of Wild Bill’s Rocky Mountain Root Beer and other drinks. Adding to the coolness was this: If you bring the mug to other conventions at which Wild Bill’s is exhibiting, five bucks will get you free refills at that convention as well. I saw hundreds of fans carrying around mugs filled with deliciousness. I was one of them.

Note to self. The next time I go to Wizard World Cleveland or any other convention that boasts such variety, I’m going to bring some assistants to help me document that variety.

Celebrity and comics guests are great. Cosplay and old comics are wonderful. Panels and other programming always rank high with me. But there’s so much more to experience at these conventions and we almost never hear about it.

The first of my Wizard World panels was DIVERSITY IN THE INDUSTRY (11:30 am). Hosted by Abdul Rashid, CEO and Founder of AHR Visions, here’s how it was described in the program guide: A panel geared to spark awareness and imaginative thinking to assist with social and creative enrichment through “paradigm breaking” (thinking out of the box) approaches towards a directed effort in diversifying the industry market with fresh new characters and content.

The panel featured artist and illustrator Sequoia Bostick, comics writer and publisher Victor Dandridge, comics creator Clare Kolat, and writer Martin Reese. I was a special guest on account of Abdul and Victor asked me and on account of diversity in comics is near and dear to me.

Since I was too busy being on the panel to take notes on the panel, I can’t give you a proper summary of all the very smart statements made by panelists other than myself. I should start traveling with one of those robot Recorders that used to hang with Thor in those glorious days of Stan Lee and Jack Kirby showing everyone else in comics how it’s done. But Martin wrote about the panel in his blog and you can read his comments here.

I have been trying to condense my diversity in comics rap down to a few cogent points. Here are some of them:

Comic books must reflect the diversity of those who read them and that means more than gender and race and sexual orientation. That last term always sounds clunky to me. Does someone have a better term I can start using? People of faith are rarely shown in comics and they should be. People from all walks of life should be shown in comics. Liberals and conservatives should be represented and not as political caricatures. We should all see ourselves in our comics somewhere.

Create characters not icons. People aren’t perfect and our diverse characters shouldn’t be perfect either. For me, characters are far  more interesting than icons, both as a writer and a reader.

While it’s preferable to create original characters of diversity in comic books, there’s nothing wrong with switching things up to get those characters into long-running university. My wise best friend and new grandfather Bob Ingersoll has a pretty good take on this, so good this is only the first time I’ll be quoting him in this and future blogs. He told me:

My theory on diversity casting has always been I don't mind it...if it's accurate. Making Perry White black in 2013 is fine, because, in, 2013 a major metropolitan newspaper could have a black editor-in-chief. Making him black in 1939 doesn't work. Historically, there would not have been a black editor-in-chief of The Daily Planet back then.

Same with the movie Wild, Wild West. If a black man were waking around Reconstruction-era Texas asking questions, he would have been lynched. It didn't make sense for James West to be black. But having a black Pete Ross or Jimmy Olsen? No big.

Finally, don’t go looking for enemies among your friends. Whenever I say this, I recall the ridiculous online shit fit when an issue of Batgirl, a comic-book series known for its diverse cast, featured a villain who impersonated the title heroine. Yes, the villain was more than a little flamboyant as befit his performance artist character, but there was nothing in the comic book itself that defined him as either gay or transgender.

Certainly, one needs to avoid stereotypes in depicting characters of diversity. But if every black character, women character, person of (whatever) faith and so on has to be perfect, you aren’t telling your stories honestly.

I’ll keep working on these points until I can express them better and shorter.

My next panel was FROM THE AVENGERS TO AGENT CARTER TO JESSICA JONES - AND SOME DUDE NAMED DEADPOOL! MARVEL COMICS AT 77 WITH SPIDER-MAN’S DANNY FINGEROTH AND CAPTAIN AMERICA’S TONY ISABELLA (2 pm). The description: In 1939, Marvel Comics #1 debuted, unleashing the Sub-Mariner and the Human Torch on the world and launching what would come to be known as the Marvel Universe. Danny Fingeroth (Deadly Foes of Spider-Man, The Stan Lee Universe) and Tony Isabella (Ghost Rider, Black Lightning) present an illustrated tour through the many decades of comics, movies and TV series that make up the phenomenon that is Marvel.

This is the lightning round of comics convention panels. I really enjoy doing panels with my friend Danny, but this one is demanding. Imagine covering 77 years of Marvel history in around 45 minutes or so. It’s difficult to provide much context or humor to the images projected on the screen, but we do our best and, judging from the audience reaction, manage to entertain and inform them as we press on. Just the same, I’m hoping I can convince Danny and Wizard World to make this a two-part panel next year. Marvel has a rich history and I want to do it justice.

My third and final panel of the day was HOW TO WRITE COMICS with MARVEL ZOMBIES’ FRED VAN LENTE, POWER PACK’S MARC SUMERAK, BLACK LIGHTNING’S TONY ISABELLA & SPIDER-MAN’S DANNY FINGEROTH. The panel program described it thus: Accomplished comics writers Fred Van Lente (Marvel Zombies; Archer & Armstrong), Marc Sumerak (Power Pack; Spider-Man), Tony Isabella (Captain America, Black Lightning) and Danny Fingeroth (How to Create Comics from Script to Print; Spider-Man) talk about how to put together a compelling comics story. Plus: they’ll answer your questions about both the creative and business sides of the comics writing profession, including how to find an artist to work with (hint: a comics convention is the number one place!) and how to write exciting dialogue!

There are also lots of books on writing comics. None of them will have all the answers, but you can learn from them. By the way, the answer to the question why your beloved blogger hasn’t written his own book on writing comic books is in the first sentence of this paragraph. The part about lots of books about writing comics. With so many helpful tomes on the subject already available, I’d rather come up with different kinds of books on the art, the craft, the history and the sheer wonder of comic books.

One. Those are some really long titles for panels. It’s kind of sort of overkill. Clever is always more alluring than long.

Two. The best part of any convention, comics or otherwise, is the people you meet at them. So, in the final installment of my Wizard World Cleveland journal, which will post early next week, I will be writing about them. See you then!

Posted by Tony Isabella at 7:55 AM