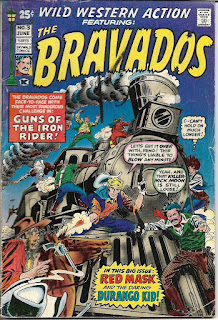 This is the first installment of my new “Western Wednesday” feature here in the bloggy thing. I grew up watching the Lone Ranger, Roy Rogers, Cheyenne, Bat Masterson and a posse full of other Old West heroes. As a teenager, I read all the Marvel westerns of the 1960s and 1970s. Today, as an adult, I am fascinated by comics westerns. I enjoy reading them, examining their historical accuracy (or lack thereof) and writing about them. This recurring feature will appear whenever I excavate an interesting issue from my Vast Accumulation of Stuff.

The cover of this issue was penciled by Syd Shores, inked by Frank Giacoia and lettered by Joe Rosen. Through Brodsky, who, I swear, could do every job associated with making comic books, the company attracted veteran creators as well as talented newcomers. I bought all of their titles - I was determined to break into comics - but I don’t recall ever submitting scripts to Skywald.

The Bravados were the lead feature of Wild Western Action and the only new material in this issue. They were the last five surviving residents of a destroyed town, banding together to roam the West in search of people in need. At least that’s my vague memory of this feature. It’s been 47 years since I read their origin.

“Guns of the Iron Riders” (10 pages) was written by Len Wein with pencil art by Shores and inks by Mike Esposito. A small town, the only green spot for many miles in any direction, is threatened by a railroad magnate who covets the underground springs that feed the little piece of paradise. He’s willing to destroy the town to get what he wants. The Bravadoes - ex-rancher Joshua Reno; the comely Hellion; “free-wheeling Jefferson Drumm, the big gentle black man Gideon and the mute Indian known as Charade - aren’t going to let another town die on their watch. It’s an action-packed story of the type that made the versatile Wein one of my favorite writers early on. The Shores/Esposito art was solid storytelling, which it had to be considering the creative team only had ten pages to do justice to five regular characters, the bad guys, the townspeople and a big ass train. 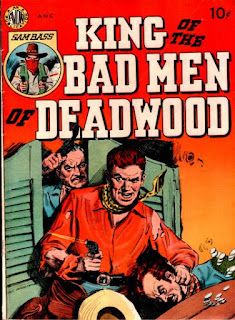 “King of the Bad Men of Deadwood” (8 pages) was written by Paul  Newman, drawn by John Forte and was reprinted from a 1950 Avon one-shot of the same name. The Grand Comics Database says both stories are ten pages, but this reprint is only eight.

The story tells of Sam Bass, “Deadwood’s first stage robber,” and is set in the 1870s. In reality, Bass robbed two stagecoaches and four trains before being gunned down by the Texas Rangers. 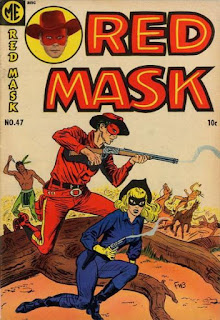 Red Mask stars in “Bait for Death!” (7 pages). The writer of this story is unknown, but it was drawn by Frank Bolle. It’s a reprint from Red Mask #47 [Magazine Enterprises, May 1955] and guest-stars the Black Phantom. Bolle’s art breaks the borders in every panel. It was a faux-3-D effect used extensively by the publisher.

Five riders spot a desperate man fighting for his life against a band of Sioux warriors. They are prospector Abner Jones, line rider Luke Pawley, bank robber and killer Johnny Rogers, Red Mask and the lovely Black Phantom. They seem to arrive too late to save the man, who somehow turns up alive later and is revealed to be a scout for the Army. Jones, Pawley and Rogers are all killed by the Sioux. It looks like the same fate will befall Red Mask, the Phantom and the  scout...until the Sioux suddenly ride away from them. The scout was bringing a warning to General Custer. Red Mask tries to send a telegram to Custer, but is too late. The General and his Seventh Cavalry have been wiped out. The Sioux spared Red Mask and his companions so they could join Sitting Bull at the massacre. Which makes for a grim ending for a grim story.

“Gun-Play in the Ghost Town” by an unknown writer is next. The one-page text ran in Avon’s Wild Bill Hickok #11 [May 1952]. Though the GCD entry for the reprint says it has an illustration by an unknown artist, but there is no illustration to be seen. 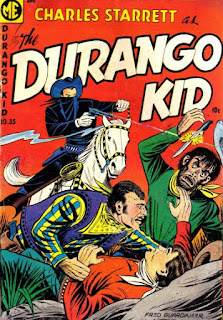 The Durango Kid is the star of “The Blazing Eyes of Muley Pike!” (6 pages), which is drawn by Fred Guardineer and originally appeared in ME’s Charles Starrett as the Durango Kid #35 [April 1955]. The writer of the story is unknown at this time.

Sidekick Muley desires to be a hero in his own right. After being captured by stagecoach robbers subsequently captured by the Durango Kid, Muley decides to fight crime another way. He orders a book on hypnotism. Believing he’s mastered hypnotism, Muley is tricked into thinking he has a group of killers under his control. But the men have concealed weapons with which they plan kill the masked hero.

The surprise is on them. Durango notices the supposedly entranced men were giving each other sidelong glances and smirking. Throwing the huge book at them, the Kid then shoots their guns out of their hands. A disgusted Muley rips the book to shreds. 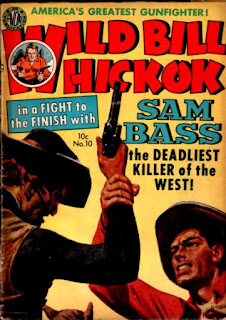 The issue’s final story is “Dodge City's Outlaw Tamer” (8 pages) by an unidentified writer and artist. It tells how Bat Masterson tamed the violent town while serving as its sheriff. It originally ran in Avon’s Wild Bill Hickok #10 [February 1952].

This is a shorthand version of Masterson’s time as sheriff of Dodge City. It is somewhat accurate in places and does drop the name of a real-life outlaw or two, but it doesn’t mention young Masterson’s brush with the law nor his life before and after his time in Dodge City. Masterson led an interesting life and it would probably make for a fine biographical graphic novel.

Besides the editorial material, Wild Western Action #3 has 11 pages of ads of the low-rent variety which were all the smaller comics  publishers could get. Notable among them are ones pitching products based on the popular entertainments of the day: life-size, glow-in-the-dark posters of Barnabas Collins from Dark Shadows; monster-size monster figures like the Frankenstein Monster; 100 stick-on stamps of movie monsters; Jeri of Hollywood’s “free” star photos of stars ranging from Lucille Ball to Clarence Williams III as well as fan-club memberships for same; and color posters of musical stars like Bob Dylan, Chicago and the Beatles.

That’s it for this premiere installment of “Western Wednesday.” It won’t be a weekly feature, but it will appear as often as I uncover interesting western comics in my Vast Accumulation of Stuff.

I’ll be back on Friday with more stuff.