Commando is a black-and-white UK war comics digest that publishes four issues every two weeks. Two of those issues feature reprints, two feature new stories. It launched in July 1963 and, as of this writing, the most recent issues I’ve received up are issues #5359-5362. Though I am about eighteen months behind in my reading of my subscription copies, it remains one of my favorite comics anywhere in the world.

My last “Commando Corner” was well received, so let’s take another look at some issues I’ve read recently. First up is Commando #5214, which is dated March 23, 2019. I told you I was behind in reading these action-packed and character-driven stories.

Ian Kennedy is the cover artist for “Hunt That Gun!” The story, which was first published in 1993, was written by Alan Hemus with art by Gordon C. Livingstone. Second Lieutenant Jed Dodds has his own “white whale” in a Wehrmacht’s K5 railway gun that can fire a shell almost forty miles. At the start of the story, it kills one of Jed’s fellow American officers from across the English channel. Dodds is determined to get that gun and the arrogant German captain who commands it.

Dodds’ quest takes him all across Europe. Hemus keeps Jed’s several close (but not close enough) encounters with Hauptmann Franz Jost and the railway gun exciting and believable. I’d rank this story as one of my favorite Commando tales.

Hemus (1925-2009) was a prolific writer of both comics and prose. He wrote over 80 issues of Commando and continued writing up until his death. You can read more about him here.

Livingstone (August 17, 1934 - June 19, 2017) was Commando’s most prolific artist. He drew over 360 issues of the title. He was also one of the artists for the publisher’s educational center spread  “The Falklands File” (1982-1983). Appearing in DC Thomson's weekly war comic Warlord, the feature covered the 1982 Falklands conflict between Britain and Argentina. 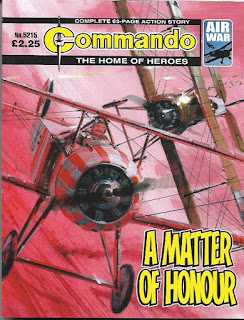 Commando #5215 [4-6-2019] has a striking cover by Keith Burns, his second for the title. An award winning aviation artist and commercial illustrator, Burns has drawn comics for the past decade. He was the artist on the Titan Comics revival of Johnny Red from the Battle Picture Weekly Star and has worked on The Boys.
“A Matter of Honour” is a World War I “Air War” tale of two pilots - Pierre Lafitte and Gustav Von Brunner - who are evenly matched in skill, dexterity and cunning. Lian McLaughlin, who we discussed in our previous “Commando Corner,” is the writer. It’s a well-crafted story, albeit a familiar one. It’s the “honor among airmen” trope that has worn thin for me. As you expect, honor is almost never an absolute for the enemy, but I did get a kick out of the final duel between Lafitte and Von Brunner.

Artist Khato does a nice job on the visuals. The name is familiar to me, but I can’t recall where I’ve seen his work before. My usual online searches haven’t been very productive. I keep thinking he’s been a contributor to 2000 AD, but, if he is, those credits aren’t showing up on the Grand Comics Database. 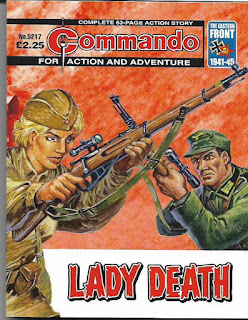 Commando #5217 [4-6-19] presents “Lady Death” by Andrew Knighton and artist Manuel Benet. The cover painting is also by Benet. The title character is Private Svetlana Ivanovna, sniper extraordinaire and the deadliest shot in the Russian army. The tale reveals the tragedies that led Ivanovna to take up arms during World War II and the further tragedies she experiences during the war. Her goal is vengeance against the Germans and, in particular, a German sniper who may be her equal. It’s a terrific story, one of many Commando adventures showcasing women warriors.

Knighton is a writer of stuff: speculative and historical fiction, including comics, novels and short stories. He’s done over a dozen issues of Commando and has also been published by Top Cow.

Benet was born in Spain in 1946. Here’s what Lambiek Comiclopedia has to say about him:

Manuel Benet Blanes was born in Valencia. During the ‘60s and ‘70s, he studied at the Escuela de Bellas Artes in San Carlos, the Escuela de Maestría Industrial and at the Academia de Pintura Vicente Barreira. As a comic artist he has drawn for several foreign publishers, including DC Thomson (Scotland), Fleetway (England), Bastei (Germany), Anaya (Spain), Semic Press (Sweden) and Universo (Italy), as well as the British daily The Sun. Mainly a fine artist, he has been exposing his work in galleries since 1976. 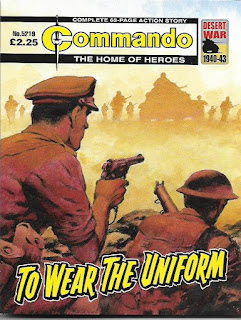 Commando #5219 [4-20-19] features “To Wear the Uniform,” a desert war story by Lian McLaughlin with a cover painting by Ian Kennedy and interior art by Klacik. When I searched for information about the artist, I came up empty. I found another artist with that last name, but it doesn’t seem to be the same person. I did like the art in this issue, especially the distinctive faces and the emotions he drew into those faces.

The hero of this story is German Jew Jakob Rosenbaum. While he and his family escaped from Germany, Jakob wants revenge for the loss of their homeland. He joins the British army where he does not meet with universal acceptance. Not unexpectedly for a Commando story, the young man proves himself and then some. Commando #5222 [4-20-19] reprints “The Last Nazis” from 1994. The story was written by Anthony Knowles, another creator I have little information on. He wrote at least a half-dozen issues of Commando and some children’s books. The cover painting and interior art are by Gordon C. Livingston.

This thriller is set near the end of World War II. Germany has been defeated, but some die-hard Nazis are trying to make their way to safety with military secrets, plans for weapons and vast wealth. Working with the Japanese, they care nothing for their own German seaman and less for the prisoners of war at a Japanese camp where they stop. This suspense story is filled with surprises and has a very satisfying ending.

While I’m writing my next book, I won’t be attempting to post new bloggy things every day. I’m writing a number of columns a piece at a time. When one is finished, I’ll post it.

Stay safe, my friends. Stay sane. If you are an American citizen, vote for Joe Biden and Kamala Harris. Our country can’t take four more years of the criminal Trump and his Republican gangsters. If you’re not an American citizen, please send us your good thoughts. A lot of us trying to once again place our nation on the right side of history.