THE 30 FOOT BRIDE OF CANDY ROCK 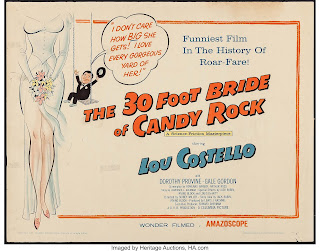 When I was younger, I was not particularly fond of the Bud Abbott and Lou Costello movies. This was likely because I identified with the always-bullied Costello. I found no escapism in a reflection of my real life. However, I have started warming up to their movies, especially those featuring the Universe monsters.

I always thought Costello was the more talented member of the duo. I felt he was at his best when he did scenes without Abbott. There was more to the little guy that was shown. I wish he had started a solo career sooner.

Which brings is to The 30 Foot Bride of Candy Rock [1959]. This was Costello’s first starring movie without Abbott. Tragically, it was his last film. The movie was released five months after his death from a heart attack.

In one of his rare performances without Bud Abbott, Lou Costello plays a rubbish collector and inventor. When radiation in a nearby cave turns his girlfriend into a giantess, antics ensure as he tries to shrink her using one of his inventions.

Emmy Lou [Dorothy Provine] is in love with trash collector Artie [Costello] and wants to marry him. Artie wants to wait until one of his inventions is a success. Opposing any such match and, indeed, any relationship whatsoever is Emmy’s uncle. Rossiter [Gale Gordon] is the town mayor and the richest man in town. He pretty much owns every business in town, save for Artie’s. Rossiter is also hungry for glory and more power. He’s brought a TV newsman to town to film a show about himself.

Artie and Emmy Lou go to the mysterious Dinosaur Springs to take readings for Artie’s work. Emmy Lou gets angry when Artie isn’t as ready to wed as she is. She runs into a foggy cave where radiation
causes her to grow into a giant.

Hearing that his niece has gotten together with Artie and thinking they have been intimate, Rossiter insists they get married and go to a secluded barn he owns. He doesn’t want the newsman to find out about his secret shame. He sends a nearsighted preacher to marry them. The mayor doesn’t know what the real situation is. 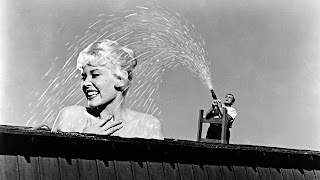 What follows is a series of pretty funny scenes, all deriving from  Emmy Lou’s condition. For one thing, it’s not easy to feed a giant wife. The hungry bride heads for town and, before long, is hunted by the military. They think she’s an alien from a UFO.

These are some pretty zany scenes, some of them involving humorous time shifts. Yet Artie does cure his new wife. I assume they have a long and happy marriage with Artie as a successful scientist and Emmy always encouraging him and, yes, all manner of weird science stuff to enliven their small-town existence.

The 75-minute movie is tied together by a string of funny scenes, but they all do lead to the conclusion. Some scenes are very broad in their humor, but the movie is quite delightful.

Costello is playing a somewhat more dynamic and intelligent version of his Abbott and Costello character. It would be nice to see him develop in subsequent films, but, alas, there would be no more such movies. That’s a loss.

One trivia note. This is not Costello’s only movie without Abbott. In the 1920s, before he teamed with Abbott, he appeared in several movies as a stuntman or an extra.

I enjoyed The 30 Foot Bride of Candy Rock. It was fun. It had some nice contemporary-for-their-time bits. It wasn’t an award-winning production, but it was pleasant and relaxing. Especially in these troubled times, that’s enough for me to recommend it to you.

Posted by Tony Isabella at 5:50 PM