﻿THE ORIGIN OF THE HERO DIAL 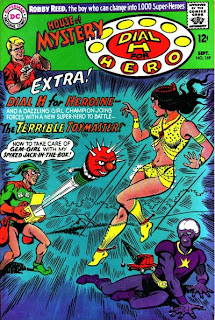 Going through my Vast Accumulation of Stuff, I found a file folder
marked EARLY SCRIPTS.  Inside the folder were complete scripts and
script fragments from the late 1960s.  I’d written most of these in
the two-column format I learned from Stan Lee’s Secrets Behind the
Comics.  We continue the exploration...

I was a fan of the “Dial H for Hero” feature that ran in House of
Mystery, especially when it was drawn by Jim Mooney.  I was not at
all pleased when “Dial H” ended and HoM reverted to a mystery-
slash-horror anthology.  The first issue of the new/old format was
all reprint.  Which made me think it wasn’t too late to bring back
“Dial H for Hero” and increase its popularity by connecting it to
DC’s other super-hero titles.  In the spring of 1968, I wrote four
pages of “The Origin of the Hero Dial.”

For clarity, here are those four pages “translated” into the format
I use for scripts today...

Panel 1. Full-page splash showing the shadows of the Guardians of
the Universe sitting watching a projection of Giantboy battling the
Thunderbolt Machine.

ONE OF THE GUARDIANS: We are all agreed then, brothers! Because of
his outstanding achievements and the grave peril threatening Earth,
the time has come to reveal to young Robert Reed...

TITLE: THE ORIGIN OF THE HERO DIAL!

CAPTION: Our tale opens as Robby and Suzy are driving through
Littleville Woods on a history project.

ROBBY: Gramps was glad to let me borrow the jeep when I told him I
needed it to come here and search for arrowheads for our history
teacher, Mr. Coombes.

ROBBY: Okay, Suzy! I can’t wait to see what Miss Milly packed for
us!

Panel 3. Scene shows Suzy and Robby sitting at picnic lunch with
cloth spread out over ground under huge tree. Policeman is walking
toward them.

OFFICER: No thanks, Robby! I’ve got to relieve Tom behind the
station desk!

SUZY: Remember to be on time for our school party! You and Officer
Smith are the guests of honor!

OFFICER: Tom and I will be there! Probably before any of you kids!

Panel 4. Scene shows Suzy and Robby looking up in horror.

CAPTION: After Officer Bailey has left...

SUZY: Robby, look! That fiery thing is coming at us! We’ll never
get away!

Panel 5. Scene shows fiery meteor hitting woods as the woods go up
in flames and smoke.

Panel 1. Scene shows two Guardians standing over two glass cases
which contain Robby and Suzy, both of who are unconscious.

CAPTION: Minutes later, far off in a distant galaxy...

FIRST GUARDIAN: Are they completely healed?

SECOND GUARDIAN: Yes! We should be thankful that they were exposed
only for seconds to that terrible fireball.

FIRST GUARDIAN: And the other earthling...the police officer?

SECOND GUARDIAN: We were too late for him! It is sad! But there
will be enough time for sorrow later!

Panel 3. Scene shows Robby and Suzy getting up from glass cases.
Guardian is standing nearby.

GUARDIAN: Arise, Robby Reed and Susan Johnson! You are needed to
save your earth, nay, your universe!

Panel 4. Scene shows Robby and Suzy standing and talking to the
Guardian.

ROBBY: What’s this all about? Who are you?

GUARDIAN: Your questions shall be answered! I am one of the
Guardians who gave the power ring to Green Lantern and many like
him throughout the universe!

CAPTION: “Many eons ago, evil spread through the universe because
of the forbidden act of the most evil creature alive, Krona!*

CAPTION: “We thought we were rid of him when we imprisoned him in
an energy sphere and hurled him into endless space!”

GUARDIAN: We decided to combat the evil one of our race had
created! The power rings were our second attempt!  Your mystic dial
was the first! Because it was so unpredictable, we rocketed it into
space!

SUZY: Robby, what’s all this about a mystic dial? What’s going on?

GUARDIAN: There is no need to explain! At my will, let your mind be
cleared!

SUZY: Now I remember how I once was a super-heroine and assisted
Robby!*

CAPTION: “But Krona returned and almost destroyed the universe once
more!”

GUARDIAN: Now he has returned to work his evil! In some
mysterious manner, he has caused all power rings and batteries
to cease functioning!

CAPTION: Suddenly, appearing as if by magic...

KRONA: The manner is not so mysterious! Allow me to explain!

GUARDIAN: By the creator of all things! Krona has invaded the
domain of the Guardians!

KRONA: Just a mental image, my friend! As for your Green Lanterns,
a cosmic storm increased my mental powers for a brief time.  In
that time, I regained my human form and prevented you from stopping
me! Prepare for doom! It is now inevitable!

I think you can understand why I’m sometimes hesitant to read my
old scripts.  I think I pulled an eye muscle wincing at my starting
every panel description with “scene shows.”  Not to mention at some
of the less-than-glowing captions and dialogue.  That said...

Bringing Robby into the DC Universe proper was a good idea as was
restoring Suzy’s memory so that he could have someone with whom he
could talk, have a super-powered partner and, most importantly, let
Jim Mooney draw a cute girl every issue.  I think I established the
menace effectively and quickly.  The death of the policeman added
a very serious note to the story and I was a very serious teenager
back then.

A major wincing came when the Guardian revealed the hero-dial had
just been flung into space willy-nilly.  On the other hand, it is
fairly consistent with the decision-making skills of the Guardians
over the years. Arrogant blue dummies, they are.

I have no memory of where the story would have gone from these four
pages.  I suspect I would have gone into more detail re: the origin
of the Hero-Dial, being as how that was the title of the adventure.
I’m sure Robby and Suzy would have become various super-heroes to
fight Krona.  It just now occurred to be that they could turn into
Green Lanterns at the end of the story to defeat Krona as the rings
they wore would be powered by the Hero-Dial.

Frequent wincing aside, I enjoyed revisiting this ancient script of
mine.  I might well take another swing at this kind of storytelling
in the future.  In the meantime...

If you’re a professional or hopeful comic-book artist who’s wanted
to draw a Tony Isabella script, here are four pages of script you
can use to get that out of your system.  You don’t need to ask my
permission.  Just draw them and do with them as you please, though
it only be polite to give me a look at them and provide a link to
wherever you post them online.

I hope you’re having as good a time going through my EARLY SCRIPTS
file as I am.  There will be at least two more installments of the
exploration coming your way this weekend.