BREAKING DOWN THE COMICS OF JULY 1963 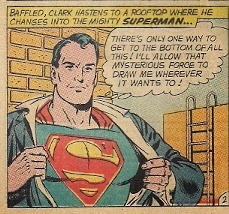 There are five months I consider of particular import to my comics career. The first of these was December 1951, the month when I was born.  If you’re a veteran bloggy thing reader, you will recall I devoted a great number of bloggy thing entries to the comic books that hit the newsstand that month.

July 1963 is the second important month in my comics career. It’s the month when Fantastic Four Annual #1 sealed my fate. That best of all comic books made me want to write comic books myself.  Back then, I had no idea how to go about that or if it was even possible for a kid from Cleveland to accomplish that goal. For better or for worse, I did achieve that dream.  I moved to New York and went to work at Marvel Comics in October of 1972.

This month, I begin the long bloggy journey through the comic books of July 1963. Let’s look at the path before me.

Mike’s Amazing World of Comics is an invaluable resource for comic-book fans and historians.  Using Mike’s “The Newsstand” feature, I came up with 133 comic books that were on the newsstand at roughly the same time as Fantastic Four Annual #1. The list also includes Famous Monsters of Filmland 1964 Yearbook #1, which, though it’s a magazine and not a comic book, may be a stop on this long nostalgic adventure of mine.

The only omissions on this list are the four comic books published by the American Comics Group that month.  Adding those comics to the total gives us 137 issues.  It’s likely my issue-to-issue looks at these comic books will extend into early 2015. Who says I don’t think ahead?

Not counting Famous Monsters publisher Jim Warren, who had not yet launched Creepy, Eerie and Vampirella, there were eight publishers sending comic books to the newsstands...

The top three publishers had over 50% of the releases that month. Notable events included the debuts of the Avengers, the X-Men, the Crimson Dynamo, the Porcupine and Mera, who would become Aquaman’s wife in a little over a year.  The month also saw the resurrection of Lightning Lad in Adventure Comics. He’d sacrificed his life for his fellow Legion of Super-Heroes members a year earlier.  Now one of them would do the same for him.

The humor titles could have been broken down further.  You had teen humor (Archie and The Many Loves of Dobie Gills), little kid humor (Little Lulu and Richie Rich), funny animal humor (Mighty Mouse and Huckleberry Hound), celebrity humor (Jerry Lewis, Three Stooges), comic strip humor (Blondie and Dagwood), fantasy humor (Casper and Timmy the Timid Ghost), military humor (Sad Sack), and even Car 54,  Where Are You?, based on the TV comedy that ran on NBC from 1961 to 1963. Since I never read many of those titles back in their day, I’m looking forward to reading them now.

I lumped all Walt Disney comics into their own “genre” because of all the different elements found in those issues. You’ll find humor and romance and supernatural elements in Snow White and the Seven Dwarfs. Dumbo is adventure and humor.

Titles featuring Millie the Model and Patsy Walker also got their own “genre” in my listing. They weren’t just humor or just romance comics. They were very much their own thing.

The most surprising genre turned out to be “medical drama,” which doesn’t really exist as a comics genre today.  There were as many comics starring doctors and nurses as there were western comics.

Hey, if you want to tell a giant ape who shrugs off nuclear blasts that he can’t have his own genre, be my guest. Just don’t blame me if the conversation doesn’t go well.

One more bit of number-crunching for you.  Of the 137 comic books which were published in July of 1963, 39 were licensed properties. That was 28% of the total issues published. The number/percentage goes even higher if you add Little Lulu and the Harvey titles like Casper and Sad Sack.  I left those out because I’m fairly certain those characters were owned by their comics publishers by July of 1963.  Licensed properties are still a big part of the modern-day comics industry, but I doubt they represented over a quarter of all issues being published today.

I’ll be writing about Action Comics #304 and Adventure Comics #312 on Friday and Saturday of this week. I plan to write about two or three comics from July of 1963 every week, but that will depend on what else crosses my desk and my mind.

I’ll be back tomorrow with another “Rawhide Kid Wednesday” as the Kid “pits courage and six-shooters against a gun-slingin’ gang of badmen!” It’s sort of his thing.

Posted by Tony Isabella at 6:09 AM