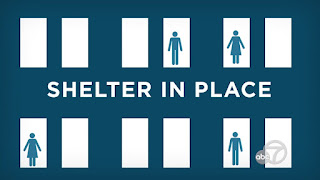 Friends and family know I’m going more than a little stir-crazy as I shelter in place during the COVID-19 pandemic. This is ironic in that, as a freelance writer, I generally spend most of my time in my house anyway.

I have it much better than most people. Though my Saintly Wife Barb must still go to work at the MetroHealth facility in Parma, Ohio, her building doesn't have any coronavirus patients and, because it’s not set up for such patients, is safe. Knock on wood.

Eddie and Kelly, our wonderful children, work from their own homes. Eddie has to visit his projects on occasion, but, as those are all outside projects, his risk is minimal. Roads still need to be built and maintained.

Kelly is an analyst for a major bank and has been doing that work from her home since long before the current crisis. The only real change is that she used to go into the office occsionally.

We get together once or twice a week for a family dinner. Hugs are rare, but at least we’re in the same place for a few precious hours. To date, none of us have shown any symptoms.

What fascinates me most about this situation is how many things we took for granted are off the table for the foreseeable future. It’s the little things that surprise me the most. Like that I can’t get a bacon and egg bagel at McDonald’s. That, while I used to gas up my SUV and go to Denny’s for a make-your-own-grand-slam breakfast, I can’t do that. That, while I used to, on rare occasions, get ahead on my work and treat myself to an afternoon pizza and a movie at our local Regal Cinemas multiplex, that theater is closed and will remain so for quite some time. It doesn’t surprise me that all of the above have happened. It surprises me that they now mean so much to me.

Of course, the comics industry and the entertainment industries in general have taken major hits during the pandemic. No comic books being distributed by Diamond. Comics writers, artists and staffers being laid off. Many TV shows that will not complete their current seasons as planned. Movies being pushed back to whenever theaters open again as filming on other movies has been halted. Newscasters, pundits and talk show hosts are broadcasting their shows from their living rooms. The technology we used to accuse of keeping us apart from the world is now what connects us to the world.

I’m going to be writing these little slices of pandemic life on a regular basis. I’m going to avoid politics in them because we all know what a partisan shit show our criminal president is performing for his rabid base. And with that...

STILL WORKING MY WAY BACK TO YOU, BABE! 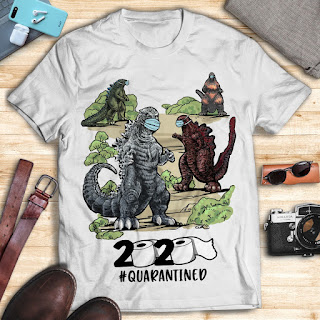 I'm currently dealing with quite a few non-coronavirus-related issues. I may not get back up to speed on the bloggy thing and other stuff until May. But I didn't want anyone to think my absence meant I was ill or that any member of my family was ill. Unless you count the comics industry as part of my family. In which case, unfortunately, the comics biz is looking more than a little shaky at present. Even if I'm not actually part of it these days, I hope it pulls through and eventually flourishes.

My immediate plans are to work on the "bible" for a new project I'm very excited about. I want to  respond to the shocking number of e-mails and messages I have left unanswered for too long. I also want to complete a bunch of items on lengthy "to do" list. Though my plate is quite full, I can always make room for paying gigs.

I'm thinking about all of you. Those I know well and those I only know from your following me here and elsewhere. Stay safe. 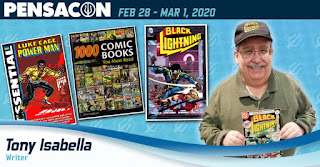 My situation is better than most. I’m grateful for that. But, as is the human way, I get angry and depressed over the world we are now living in. I think it’s more important than ever that we identify those things that bring us joy and celebrate them.

Here are the things that made me happy in March.

March 1: Pensacon 2020. We enjoyed great meals, especially at the Harry Potter-themed Fish House, the simple but satisfying Grafitti Pizza and the amazing Pensacon green room. Best of all, I lost four pounds over the weekend.

March 2: Pensacon 2020. I had a fun time doing five panels during  the weekend: Civil Rights and Social Justice Movements in Comics,  a repeat of the Cheesy Monsters Raid Again presentation I launched at G-Fest 2019, Classic Monster Movies, Comic Book Adaptations and Godzilla Vs. King Kong. I did more monster panels than comics ones this year. I wouldn’t be adverse to guest invitations from monster conventions.

NOTE: Both Civil Rights and Social Justice Movements in Comics and Cheesy Monsters Raid Again should be on YouTube soon.

March 3: Betty Sutton’s Democratic Party Super Tuesday Watch Party. A great time meeting and talking with my area’s outstanding slate of candidates. As for the former Congresswoman, Sutton is running for a seat on Ohio’s Ninth District Court of Appeals.

March 4: Pensacon. Our flights back to Cleveland couldn’t have gone better. Our connecting gate in Atlanta was just six gates down from where we landed. Plus I had a nice in flight conversation with Home Improvement’s Richard Karn. 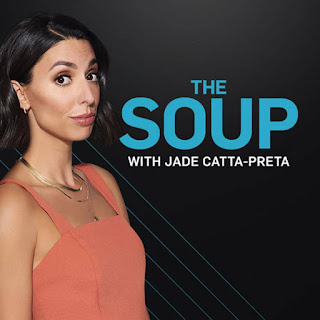 March 5: The Soup is back on E! New host Jade Catta-Preta is simply delightful.

NOTE: Alas, like so many other favorite shows, The Soup has been postponed until further notice.
March 6: My daughter Kelly has bought a house. I am so proud of the capable, feisty and lovely young woman Saintly Wife Barb and I have raised.

March 7: My son Ed is doing a great job managing my campaign for a position on the Medina County Democratic Party’s Central Committee. He’s a progressive powerhouse!

March 8: Saturday Night Live. Senator Elizabeth Warren’s surprise appearance was wonderful. She was funny and smart and such a good sport. I wish she had won the primaries.

March 9: Early voting at the Medina County Board of Elections. In the face for my precinct’s Democratic Party Central Committee seat, I voted for the best candidate: myself. I confess it was a thrill to cast that ballot.

NOTE: Ohio closed all its polling places and postponed the primary election. Citizens can still vote by mail through April 28. I won’t know until sometime after that if I’ve been elected to the central committee of the Medina County Democratic Party. 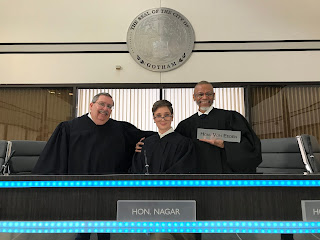 March 10: Appearing in the Black Lightning season three finale with Jennifer Christa Palmer and Trevor von Eeden. It was the latest of the blessings that have come my way because of this remarkable TV series. My thanks to Salim Akil for making this possible.

March 11: Knives Out. After a friend repeatedly told me it was the most enjoyable movie he had seen in 2019, I finally watched it on Amazon Prime. He was right. Kudos to writer/director Rian Johnson and the film’s most remarkable cast.

March 12: Watching Wheel of Fortune and Jeopardy, I was pleasantly surprised “COMIC BOOKS” was the solution to one of the former’s puzzles and “THE COMICS” was a category in the latter. We’ve come a long way.

March 13: The comics industry has been reacting responsibly to the COVID-19 pandemic. Please support the creators and comics shops who adversely affected by the cancellations of conventions and other events.

March 14: The Week. When I dropped several magazine subscriptions, I subscribed to The Week. “The Best of the U.S. and International Media” packs a lot of interesting and useful information into its forty pages.

March 15: Superman Smashes the Klan by Gene Luen Yang with artist Gurihiru, letterer Janice Chiang and editor Marie Javins. A great  conclusion to the three-issue story that got me a little misty in a good way. Why can’t wonderful stories like this be the standard for the “real” DC Universe comics? 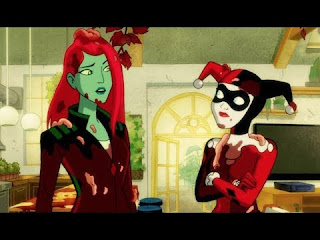 March 16: Harley Quinn. It’s unspeakably violent and about as dark as humor gets, but I watched the premiere of this animated series on DC Universe and enjoyed it. That probably speaks to a darkness in my soul.

March 17: Dynamite’s Glow Vs The Babyface by Aimee Garcia (Ella Lopez on Lucifer) and wrestler AJ Mendez with art by Hannah Templer and color art by Rebecca Nalty. Just a plain old fun comic based on the Netflix series.

March 18: The weight isn’t dropping as fast as I would like, but, as I go through my closets, I’m finding my XL shirts are fitting me once again. The quest continues.

March 19: Ménage à 3 by Gisele Lagrace (story/art) & David Lumsdon (story). I began reading this delightful sex romp online years ago, but couldn’t keep up with it. Now I’m reading the trades and loving it even more in that format.

March 20: Zatanna and the House of Secrets by writer Matthew Cody, artist Yoshi Yoshitani and letterer Ariana Maher. This “DC Kids” graphic novel is one of the best Zatanna stories I’ve read in quite some time. 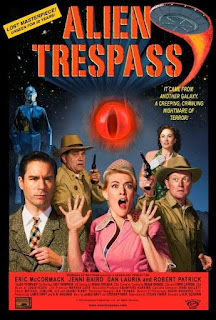 March 21: Alien Trespass. This wrongly maligned 2009 sci-fi comedy with its homages to the films of the 1950s is great fun. I found it while surfing Amazon Prime and enjoyed it immensely.

March 22: The Svengoolie Studio Set from MeTV. Another spooktacular addition to my Social Justice League of Action Figures.

March 23: Being Heumann: An Unrepentant Memoir of a Disability Rights Activist by Judith Heumann with Kristen Joiner. An eye-opening autobiography of humor, inspiration and righteous anger. Highly recommended.

March 24: I have books to read, DVDs to watch, TV shows to binge. I have things to write, even with no guarantee they’ll be published soon. I have food, soap and toilet paper. I’m good and I hope you are, too. 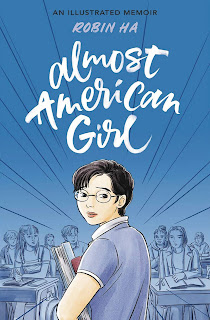 March 25: Almost American Girl by Robin Ha. This illustrated memoir of a young Korean girl come to the United States is riveting. It’s an amazing start for Ha; I can’t wait for her next graphic novel.

March 26: Craig Yoe’s FREE COMICS group on Facebook. If you enjoy learning about the sometimes wacky promotional comics and giveaways of the past, you’re gonna love this group.

March 27: M.O.D.O.K. When Stan Lee and Jack Kirby first introduced this villain, I wasn’t all that excited. However, over the years, he’s risen in my estimation. Please tell me there’s a Funko figure.

March 28: Andy Borowitz. The Cleveland comedian who writes hilarious short pieces for The New Yorker has been on fire in these days of pandemic terror. Since March 5, he has posted 15 columns that are as ridiculous as real news. He’s a hero!

March 30: Knowing that if I die from Covid-19 virus and my cat eats me, she probably won’t die of the same thing. Hey, I can’t be a ray of sunshine every day. 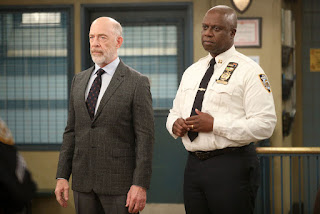 March 31: The incredible J.K. Simmons as Frank Dillman on Brooklyn Nine-Nine. As the man Captain Holt calls the best detective he has ever known, Simmons commanded every scene he was in.