ANT-MAN AND OTHER BUSINESS 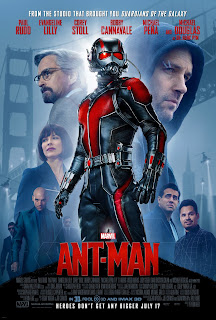 Cutting to the chase:

I loved Ant-Man, which my son Eddie and I saw the second weekend of its release. I loved it as much as I loved 2014's Captain America: The Winter Soldier, which it now ties as my favorite Marvel movie. In varying degrees, I have loved all of the Marvel movies produced by Marvel, but Ant-Man spoke to me in a manner that no other Marvel or, for that matter, any comics movie has spoken to me. To explain why, I’ll have to activate the warning alert:

A few days ago, I was discussing super-hero stuff with a comic-book company executive. To support a point I was trying to make, I said to him, “Ant-Man works because so much of it is real: the plight of an ex-con, the distrust of evil CEOs, the grief over lost love, the challenge of raising a child of divorce.”

Paul Rudd is amazing as Scott Lang, a thief seeking redemption and a path to being part of his daughter’s life. He brings considerable humor to the role, but without minimizing his character’s courage, cleverness and, yes, heroism.

As Hank Pym, Michael Douglas shows us why he is one of our favorite actors. We see his determination to prevent a great evil, his grief over the loss of his wife many years before, his fear that he has forever lost his daughter’s love. This Pym has a dark side and, in portraying his character’s fear of that dark side, Douglas elevates Marvel movie acting to a new level.

Corey Stoll does chew some super-villain scenery as Darren Cross, the CEO who would unleash deadly hounds of war on the world to make a fortune and stick it to Pym for not loving him enough. The rest of the main cast is superb...

Evangeline Lilly is smouldering as Hope Pym. She is hard as nails, crazy smart and skilled, devastatingly beautiful.

Judy Greer and Abby Ryder Fortson are adorable as Maggie and Cassie Lang. Bobby Cannavale gives a layered, wonderful performance as Maggie’s fiancé. As a detective, he is at understandable odds with ex-convict Lang, making for some great moments.

Michael Peña, David Dastmalchian and T.I. - love those initials - are terrific as Lang’s partners-in-crime. They are much more than comic relief. I hope we see more of them.

Anthony Mackie has a nice turn as the Falcon. Is it too soon to be asking for him to get his own movie?

Hayley Atwell has a brief role in the movie. Even in make-up that makes her look much older, Agent Peggy Carter is still amazing. She might be the Emma Peel of this generation.

There are four writers on this movie. Edgar Wright, Joe Cornish, Adam McKay and Paul Rudd get screenplay credit. Wright and Cornish get story credit. Wright was the original director, but Peyton Reed is the director of record. I don’t know how the finished version differs from what Wright planned, but I do know the movie as shown is entertaining and excellent. The special effects are astonishing. The movie has action, humor, suspense and that all-important human element. It even has a St. Bernard size ant that Cassie adopts as a pet. How could I not love this movie?

Stan Lee, Larry Lieber and Jack Kirby get credit for creating Ant-Man. A bunch of other Marvel creators get credit for the characters they added to the Marvel comic books they did and who appeared in this movie. That always warms my heart.

If you’ve seen Ant-Man, I hope you’re in agreement with my opinion of the movie. If you haven’t, I recommend it highly. I’ll be buying the Blu-ray of the movie as soon as it’s released.  It’s a keeper.

Tony Isabella returns in the next paragraph.

Regular blogging resumes today, though there will be days when I’m unable to post because I’m out of town. My current plan, subject to the usual “best laid plans” aspect of life, is to review the rest of the movies that made their SyFy channel debuts during Sharknado 3 week. Next up will be Zombie Shark.

Those reviews will be followed by my embarrassingly late report on Indy Pop Con 2015. I’m thinking that report will stretch out over three or four bloggy things.

After that, having read all the Free Comic Book Day 2015 comics I received, I’ll spend a day or three reviewing them. Those are the big topics on my radar at the moment. I may throw in other topics along the way.

I’ll be attending PulpFest 2015 in Columbus from Thursday, August 13 through Saturday, August 15. The convention continues on Sunday, August 16, but I’ll probably be itching to get back to my writing by that time.

I have several other events on my schedule this year:

There is a slim possibility of a New York show in December, but I am waiting for confirmation from a promoter who hasn’t contacted me since February. I’m not holding my breath.

I don’t like to say “never,” but it would have to be a pretty swell convention and compensation package to get me to add any events to this 2015 schedule. I have too many projects on my desk right now to take any more days off.

Black Lighting and DC Comics news? Nothing to see here.

My various discussions with DC Comics are ongoing and positive. I remain guardedly optimistic. But, if there are announcements to be made, they will almost certainly be announced by DC. Including any word on my pitch to write a Batman mini-series in which the Caped Crusader must battle a collective of all the gorilla villains that have appeared in DC comic books past and present. I’m pretty sure I’m just kidding about that last bit, but who knows what madness I am capable of?

I also remain enormously gratified by and grateful for all the fan and professional support for Black Lightning and myself. It’s been a long struggle and many of you have been with me from the start. Thank you.