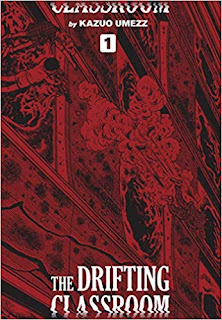 I read quite a bit of manga. I probably read more manga than I do current super-hero comic books. For one thing, a manga volume has a more satisfying chunk of story than you get in most comic books. For another thing, I like the amazing variety manga offers.

For a third thing, ClevNet, the 100-member-plus organization with which my Medina library system is affiliated, makes it possible, nay, easy for me to read any manga that any of those libraries have in circulation.

Which brings us to today’s manga reviews...

The Drifting Classroom: Perfect Edition Vol. 1 by Kazuo Umezz [Viz Media; $34.99] is one of the most terrifying comics I’ve ever read. It’s been called “a timeless horror classic” and I’m absolutely on board with that description.

Here’s the back cover copy, which doesn’t go nearly far enough in describing the horror of this series:

Out of nowhere, an entire school vanishes, leaving nothing but a hole in the ground. While parents mourn and authorities investigate, the students and teachers find themselves not dead but stranded in a terrifying wasteland where they must fight to survive.

The school is an elementary school, so the students range from the first to the six grades. Pretty young to have much of a chance of surviving. The teachers? Lacking the imagination of the young, the teachers do not fare well at all and some of them pose a threat to the kids. The supply of drinking water and food is so limited that some adults and students go mad from even the thought of starving. The world outside the school is barren and hostile. In this bleak existence, there is no guarantee that death isn’t waiting for you around the next corner.

The Drifting Classroom is seriously scary stuff. The comparison is not an exact one, but this manga makes Lord of the Flies look like Mary Poppins. Not for the faint of heart. 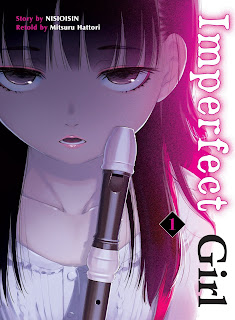 An ad in a Halloween ComicFest free comic got me interested in Imperfect Girl [Vertical Comics; $12.95]. The three-issue manga is a Mitsuru Hattori adaptation of a novel by legendary mystery writer Nisioisin.

An aspiring author see a young girl do something unthinkable. When almost struck by a vehicle that strikes her friend, she chooses to retrieve the hand-held game she was playing rather than go to her friend. She seems utterly unconcerned about her friend. This chills the would-be novelist. He can’t stop thinking about her.

The girl knows he saw what happened. She shows up at his apartment, assaults him and threatens him. She takes him prisoner, locking him in a closet of her house. If she has parents, they don’t live in the house with her. The aspiring novelist is frightened and intrigued.

The first volume is as unsettling as The Drifting Classroom, but on a more intimate level. Just two characters. One whose actions are inexplicable and the other fascinated by the other.

The second volume takes the story to a different dimension as the imprisoned writer learns more about his captor and even begins to sympathize with her. Is this a “Stockholm Syndrome” situation or is the writer growing as a caring human being?

I’m fascinated by Imperfect Girl and eager to read the concluding volume of the series. 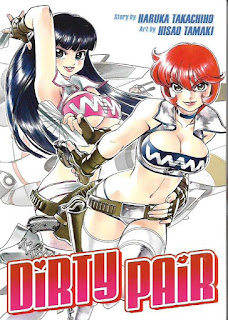 Not every manga I read clicks with me. I bailed on the Dirty Pair Omnibus [Seven Seas; $18.99] just shy of halfway through the 360-page volume. Here’s the back cover pitch:

Kei and Yuri, known as the Lovely Angels (or the notorious Dirty Pair, depending on who you ask) work as trouble consultants for the galactic Worlds Welfare and Works Association (WWWA). But in their pursuit of space-wide justice, they cause space-wide disaster! The chaotic (and strangely successful) exploits of these interstellar agents come alive in this two-in-one manga omnibus by writer Haruka Takachiho and artist Hisao Tamaki!

I could have lived with the skimpy costumes of the ladies, though I found them as absurd as I find most such costumes. What turned me off was the innocents dying by the thousands being treated as if it were hilarious.

Collateral damage. What a knee-slapper!

I’ve no doubt other manga readers enjoy Dirty Pair far more than I did. It’s considered a classic series by some. If this sounds like something you’d like, then, by all means, read this hefty omnibus edition. It’s a big comics world. 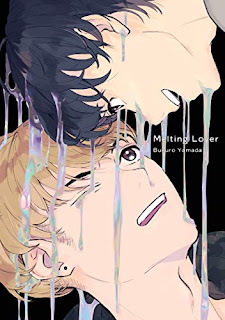 The edition of Melting Lover by Bukuro Yamada [KUMA; $14.95} I got from the library has a different cover than the one shown here. I assume male paramours were considered too controversial/steamy for library shelves. Here’s how Amazon describes the manga:

A bond of love is a beautiful thing, but what happens when outside pressures force it into forms both strange and strained. A lovesick youth encounters a mysterious shapeshifter with the ability to take on the appearance of his beloved. A hitman forswears pleasure, but cannot shake the fun-loving angel determined to follow him on his assignments. Two circus performers keep explosive secrets from one another while sharing the trapeze. And an android finds himself malfunctioning under the gaze of his pet human.

What information is not included in the above is that these romance stories all involve same-sex lovers. Which is something I would have included to let potential customers know what they were buying. The library edition I read was marked as a teen graphic novel. I think that’s the right call.

I found the stories quite readable, but they didn’t knock me out. I don’t know if this book falls into the Boys' Love genre, though, admittedly I haven’t read a lot of manga from that genre. Have any suggestions for me?

I think Melting Lover will appeal to some readers more than it did to me...and that other readers won’t like it all. That’s why I like manga so much. There’s so much variety that, if one book or series doesn’t entertain me, there are so many more to choose from.

******************************
Pandemic stuff. It appears the Medina Library and the Usenet system in general will be closed through the end of this month. But I have a lot more manga to read and review, so you can expect another one of these manga columns within the next couple weeks.

Posted by Tony Isabella at 5:24 PM