CITIZEN TONY SAYS “LOCK THEM UP!”

I’ve made it clear I think Donald Trump should spend the rest of his bloated orange life behind bars. I’m not at all optimistic that will happen, despite his concluding administration being the most blatantly criminal presidential administration of my lifetime and possibly the history of our country. However, I’m not here today to dwell on the injustice of Trump escaping his proper fate. I’m here to talk about two felons we can bring to justice. 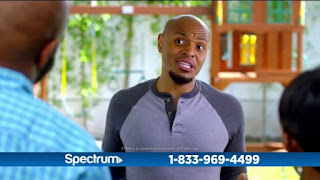 The first is Spectrum TV commercial star Tony Baker. He’s the guy who breaks into his way too understanding friend Kevin Fredericks’ house to use Kevin’s Spectrum.

We’ve seen Kevin and his wife arrive home from a trip to find Tony holding a “return to sports” party for Tony’s shady friends. It’s because Tony’s cheap-ass cable provider doesn’t have ESPN. Let me count the felonies: breaking and entering, theft of service, theft of goods - because you just know Tony raided Kevin’s refrigerator and pantry for drinks and snacks - trespassing. I’m not sure what the exact charge is, but getting all those other deadbeats to join him in these felonies must be some sort of crime.

In a second Spectrum commercial, Kevin comes home to find Tony in the middle of an online bicycle workout. Tony’s excuse this time is that his aforementioned cheap-ass online connection can’t keep up with the speed of Tony’s workout. Breaking and entering, theft of service and trespassing. Lock him up!

Instead of calling the police and pressing charges, in both cases, Kevin urges Tony to replace his weak-ass cable with Spectrum. Which Kevin clearly has no interest in doing. He’s going to keep stealing from Kevin. Felonious Tony is giving honorable Tonys like myself a bad name. 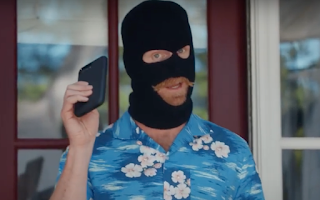 Then we have Robbert Larson, the ski mask-wearing spokesfelon for SimpliSafe, provider of the do-it-yourself home security equipment  that protects Robbert’s home from crooks like himself. This creep describes himself as a professional burglar...and even wears that ski mask in his own home. Lock him up!

What kind of message are Tony and Robbert sending to children who may see their commercials? I’m all for helping one’s friends, but those “friends” shouldn’t be helping themselves to your stuff. And don’t get me started on the maddening frequency of these annoying commercials. That might not be a crime right now, but it darn well should be. Lock them up!

If there’s a saving grace to these commercials, it’s that, when we watch them, Saintly Wife Barb finds my frantic outbursts hilarious. She laughs when I shout “Lock Them Up!” at the screen.

This is the secret of our nearly 37 years of marriage. My wife is easily amused.