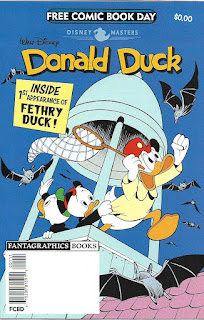 Welcome to yet another installment of my 2020's Free Comic Book Day reviews. My pals at Stormwatch Comics in West Berlin, New Jersey send me these FCBD comics so I can read and write about them in the bloggy thing. Only twice have I actually reached my goal of reading and writing about all the FCBD comics available in a given year. Maybe this time I’ll three-peat that achievement. I think I can do it, but it’ll take me until sometime in mid-2021 to complete this particular mission.

QUALITY: Three excellent stories. In the Lustig tale, Donald is a master of pest control. Like others in the “Master series” over the years, Don is incredibly skilled at this job until one wee mishap destroys him. The Scrooge story has Uncle McDuck trying to acquire a rare animal with amazing powers. Finally, while I’ve not been a fan of Fethry Duck, his initial appearance was terrific fun.

ACCESSIBILITY: Donald and Scrooge are so well-known that it would be quite difficult to tell a story about either of them that wasn’t very accessible.

SALESMANSHIP: Very good. The issue has four pages of ads for Disney collections from Fantagraphics with enough information on each that I want to read them all. SCORE: Ten points out of a possible ten points. That’s a great way to start today’s column. 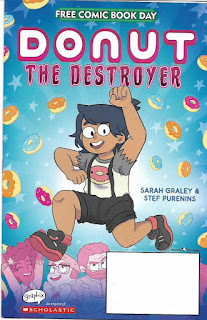 Donut the Destroyer by Sarah Graley and Stef Purenins [Graphix} has a premise that just plain tickles me. The title character wants to be a super-hero, even though her parents are super-villains. Quite infamous super-villains at that, though that doesn’t prevent them for allowing their daughter to go to Lionheart, which trains young heroes. Donut’s parents would rather she go to Skullfire, a school for young villains, they are at least okay with her following her own path. I love this concept.

QUALITY: First-rate. We get the first 28 pages of what I assume is a graphic novel. The writing and cartoony art are welcoming. I am definitely interested in reading more.

ACCESSIBILITY: This excerpt brought me completely into the story. Once again, first-rate.

SALESMANSHIP: Good. There are inside front and back cover house ads for several other Graphix books with the back cover being used to promote Donut the Destroyer and its creators.

SCORE: Ten points out of a possible ten points. I just can’t think of anything this FCBD issue could have done better. 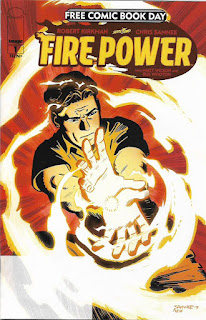 Fire Power #1 by Robert Kirkman and Chris Samnee [Image] presents 30 pages of comics by that distinguished creative team plus related text material and covers. However, the story here picks up fifteen years after the previous material collected in Fire Power Volume 1: Prelude.

QUALITY: It’s a quiet introduction to Fire Power, one that focuses  on Owen Johnson’s family life. Yet it’s very well told with enough intriguing bits to pique my interest.

ACCESSIBILITY: Though this issue follows the graphic novel prelude, the reader is given enough information to follow along.

SALESMANSHIP: All the salesman ship is for Fire Power. The comics, the text material, the back cover ad for the prelude. Did it work? Well, I’ve ordered the prelude, so... 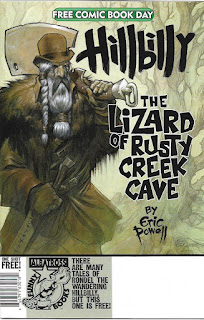 Eric Powell’s Hillbilly: The Lizard of Rusty Creek Cave [Albatross Funnybooks] is not a comic book I would have given a thought to if it had not been a FCBD giveaway. I have an aversion to comics named for what I consider insults. I hope you understand that I’ll not be naming examples here. The cover copy of this FCBD book says “There are many takes of Rondel the Wandering Hillbilly, but this one is free!” If I had to describe it, the best shorthand description that I could devise would be “backwoods fantasy.”

QUALITY: First-rate. In a village where a child is sacrificed to a giant serpent every year, young Geraldine thinks there must be some better way. What follows is her quest, her gaining understanding and a satisfying conclusion and moral.

ACCESSIBILITY: Excellent. This story is easy to get into and easy to follow. A great introduction to the title.

SALESMANSHIP: Very good. The issue has house ads for the Hillbilly trade collections and other Albatross publications. I’m planning to request the Hillbilly volumes from my local library system. 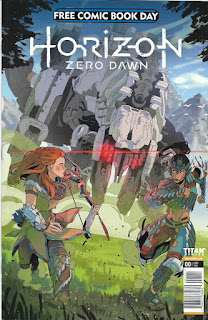 Horizon Zero Dawn #0 [Titan Games] is based on a video game. I am not a gamer and have a particular bias against comic books based on games. I tell you that up front. Here’s some Wikipedia information on this game:

Horizon Zero Dawn is a 2017 action role-playing game developed by Guerrilla Games and published by Sony Interactive Entertainment. The plot follows Aloy, a young hunter in a world overrun by machines, who sets out to uncover her past. The player uses ranged weapons, a spear, and stealth to combat mechanical creatures and other enemy forces. A skill tree provides the player with new abilities and bonuses. The player can explore the open world to discover locations and take on side quests. It was released for the PlayStation 4 in 2017 and Microsoft Windows in 2020.

QUALITY: The premise is a good one. The characters, writing and art  are okay. The 12-page story was readable, but did not make me want to read more.

ACCESSIBILITY: Excellent. There are several pages giving background on this world and its participants. Even before I read all of those pages, I had no trouble following the story.

SALESMANSHIP: Okay. There is a house ad for this series and a few other Titan books. The back cover is an ad for the video game.