What Has Gone Before;

I drove to Toledo, Ohio with my son Eddie. Mission: Fantasticon, a comics-centric show of which I had heard good things. We unloaded  my artist alley table stuff at the Seagate Convention Center, then checked into Room 1313 of the Park Inn by Radisson. We had a “Bar Rescue” experience at a local tavern. We had pizza. Eddie went to hang out with some pals from his time at The Ohio State University. I watched McGarrett and his Five-0 team fight Iron Man and rescue an abused elephant. You should go back and read’s yesterday bloggy thing, which prompted one entertained reader to tweet that I should have my own show on The Travel Channel. Our story continues.

Pre-convention Saturday morning went smoothly. I had the breakfast buffet at the hotel’s restaurant. The food was good and I limited myself to one relatively modest plate of it. I went back to my room for my briefcase and a bottled water.

The convention center is connected to the hotel, so going back and forth between Fantasticon and my room was always a quick trip. The Park Inn elevators were the fastest elevators I have ever seen in my years of convention going. They always seemed to be on whatever floor we were on and they rarely stopped along their vertical way for other hotel guests. It was a little scary.

I was disappointed to see there were no signs of life in any of the food carts or establishments outside the show floor. I’ve written about how convention centers shortchange or ignore the nutritional needs of comics fans. Those needs would be inadequately served by a snack bar within the show floor.

Setting up my table was easy because I don’t bring a big display. There was a box of Isabella-written comics. There was a box of the two-sided Clark Kent/Superman posters from the 1988 International Superman Expo in Cleveland. There was a box of random comic books priced at a dollar. I also had copies of the just-released Black Lightning trade reprinting my initial 1970s run on my creation with a new introduction and a handful of The Garfield Show albums that I work on for Papercutz. Sales were good throughout the day, which didn’t stop me from studying what some other comics creators were doing with banners and displays and whatnot. I’m always considering ways to up my game at conventions.

Background music at the convention was kept to a reasonable level, which is a relief from shows that blare such music and make talking with fans difficult. My table was within earshot and sight of the K.I.T.T. car from Knight Rider and a Ghostbusters vehicle. Even if I were scared of ghosts, I figured I could count on K.I.T.T. to save the day.

As I expected, I had a great time talking with my old comics pals Arvell Jones, Keith Pollard, Mike Grell and others. With my table between Arvell’s and Keith’s, I got to see them drawing some very nice sketches for the fans. I must come up with a project I can do with those guys sooner rather than later.

Fantasticon had terrific volunteers. I especially want to mention Marti, who was always there with bottled water and coffee when any of us needed it. Great volunteers are the heart of any successful  comics convention.

My buddy Rick Santman, who always has reasonably priced old comics at his dealer’s table, strolled by with a gift for me: a 1997 book titled A Critical History and Filmography of Toho’s Godzilla Series by David Kalat. It’s on my bedroom night stand, waiting to be read after I finish Totally Unofficial 100 Things Superman Fans Should Know & Do Before They Die.

Cleveland’s own Ted Sikora, the wondrous film maker and comic-book writer of the movie Hero Tomorrow and the comic-book series Apama: The Undiscovered Animal, had a booth at the convention. I recommend both the film and the trade paperback of the comic book...and would  do so even if Ted hasn’t bought a copy of the Black Lightning trade from me. One of the cool moments of the show was when I walked by his table and saw him chuckling as he read my introduction to that collection.

Sales continued to be good throughout the day. I sold out of that Garfield book and will have to restock before my June conventions. Anticipating/achieving brisk sales of Black Lightning, I’m already ordering additional copies of that book every month. As for those spiffy Superman posters, I’m down to my last three dozen of them. When they’re gone, they’re gone. 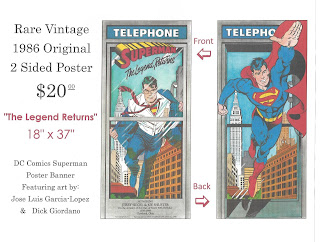 Later that afternoon, I participated in the “Marvel and DC Comic Creators Discussion” with Mike, Arvell and Keith. The “panel room” was a curtained-off area on the show floor and worked well for us. Our moderator was comics artist and writer Martin Hirchak, who did a fine job. We answered questions about our career and working in comics. We got a few laughs. No one broke anything. You can’t ask for more from a panel than that.

Among the many pleasures of the day was seeing my long-time friends Martin and Pam Arlt. Martin published Mad Scientist, a favorite of mine, and is an actual mad scientist. Both of them work on G-Fest, the celebration of all things Godzilla held in Chicago every year. It was great seeing them again.

After Fantasticon closed on Saturday, Eddie and I went with them to dinner at Table Forty 4, a very nice tavern and restaurant within walking distance of the convention center. We were joined by Tim Bean, G-Fest’s "guest wrangler" for the Japanese guests, He makes  sure those guests have what they need, from water to translators. It was good conversation, good food and a good time.

Fantasticon held an “after hours” party in the Park Inn’s bar and restaurant. With Eddie having left to hang out with his friends, I threw on a sport coat and went down to see what was happening. I’m usually exhausted from a day at a convention, but I was remarkably energetic. There was also a wedding reception at the hotel, which is my clumsy attempt at foreshadowing.

The convention party was fun. Writer Dirk Manning, aka the Toast of Toledo, was hosting karaoke in one part of the bar. I listened to the performances, but did not participate in them due to that silly restraining order granted to the music industry.

During the party, I met and chatted with Dan Fogel. Dan has been a writer, editor and publisher of adult/Underground comix books like Cherry Poptart and is the author and publisher of the indispensable Fogel’s Underground Comix Price Guide. He was one of the people I most wanted to meet at Fantasticon. I was delighted to learn he’s recently moved to Cleveland and hope to see him again soon, maybe even at the comics creators cookout I’ve wanted to host for years.

I left the party, which was still going strong, at midnight, which, technically, was the second day of the convention. As I walked over to the elevators, I was greeted by a very attractive young woman, one of the wedding reception guests, who was wearing a dress that left little to the imagination and who was obviously inebriated. I didn’t have to guess that last part because she told me as much a couple seconds later when she draped herself all over me, clinging to my neck. I think she had mistaken me for another reception guest and perhaps someone she knew. She slurred:

Look at that. We’re out of time for today’s bloggy thing. I’ll pick up this story tomorrow. See you then.

Posted by Tony Isabella at 7:45 AM