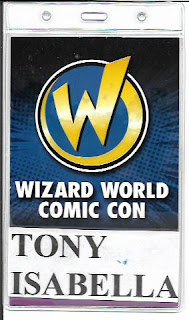 The best part of any convention, comics or otherwise, is the people you meet at them. So, in this final installment of my Wizard World Cleveland report, I’ll be writing about them.

My table in Artist Alley was between those of Chris Ehnot and Danny Fingeroth. Chris is an award-winning graphic designer and freelance illustrator based out of Cleveland. You might know his art from the covers and comics he’s drawn for Zenescope Entertainment and other comics publishers. A very personable convention neighbor, he was selling truly remarkable prints at his table. If you want to check out his work, visit his website.

Danny has an impressive resume. He was a Marvel Comics editor and writer for ages, editing the Spider-Man titles and writing titles like Darkhawk and The Deadly Foes of Spider-Man. He is a renowned comics historian and speaker who hosted several panels for Wizard World in Cleveland and elsewhere. I love being on panels with him.

Across from us were Sean Forney, a terrific artist who seems to be at every convention I attend, and Thom Zahler, one of my  favorite writers, artists and people. I had a blast hanging out with these fine folks when we weren’t all busy signing autographs, doing panels and selling stuff.

Less pleasant company was the damn mini-drone that kept flying over my table. Yes, one can make with a few humorous quips about being on a government watch list, but those jokes get old once the drone has made its hundredth pass over your table. Oh, for the power to blow shit up with my mind.

Comics artist Jose Delbo was one of the first familiar faces that I saw while wandering Artist Alley. Though Jose and I never got the chance to work together, I always loved his art and storytelling, and they were on display in countless books from most of the comics publishers I knew best: Gold Key, Charlton, DC and more. Jose does wonderful commissions and prints. He’s one of the nicest guys you will meet at any show.

Writer Dirk Manning was on hand as well. I think I see Dirk at as many and maybe more cons than I see Forney. He’s very knowledgeable about the business of self-publishing and self-promotion. I always learn something whenever we talk.

It’s always great to spend a few moments with the great Neal Adams, who I call “sensei” because he has taught all of us in the comics industry so much. He did me a number of solids when I was living in New York, including winning me over to the position that original comic art should be returned to the artists and not split with the writers. His comics work is one of the redefining moments in comics art and, in addition to that, he is been one of comicdom’s earliest  and most important figures in the battle for better conditions for comics professionals. We’ve all benefitted from Neal’s efforts and he deserves our respect and thanks for them.

Guy Gilchrist, who writes and draws the wondrous Nancy comic strip, was another old friend I was delighted to see. Many years ago, he brought me in on a comics project he wanted to do for a publisher. The project never came to fruition at that time, but he and I are looking into whether or not we can do something with it on our own. The only things I can tell you about the project at this time is that it would be comics, it would be in the genre of contemporary adventure and it would be suitable for almost all ages. 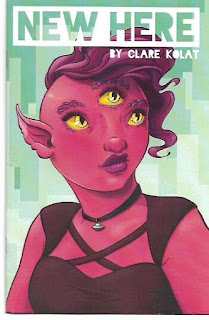 In the previous chapter of my Wizard World report, I wrote of the “Diversity in the Industry” discussion in which I participated as a special guest. After that event, fellow panelists Sequoia Bostick and Clare Kolat stopped by my table. Sequoia is an illustrator who also does comics. Clare is an artist and designer who does comics like New Here, the tale of a girl from another world becoming the first member of her family to go to college on our world. Both of these women are young, enthusiastic, talented and artists I would love to work with in the future.

Ted Sikora and Milo Miller, the creators of the Hero Tomorrow movie and the Apama The Undiscovered Animal comic book, were at the con. They and their hero are all based in Cleveland. They are currently in the earliest stages of production on an Apama movie. After I’d given them a little bit of help on Hero Tomorrow, they offered me a role in that film. I declined at the time, but I have agreed to do a cameo in an Apama movie. Hey, when you can’t afford Stan Lee, I’m your cameo go-to guy.

John Dudas of the fine Carol and John’s Comic Book Shop stopped by to say “hi.” He’s trying to complete his collection of the Marvel fan magazine, FOOM, which I edited for a couple of issues. One of these days, when I come across those issues in my Vast Accumulation of Stuff, I’ll share some bits from them here.

Directly behind my Artist Alley table were my con pal and former editor Renee Witterstaetter and artist Michael Golden. Sadly, they both had the dreaded “con crud” disease. By the last day of Wizard World Cleveland, poor Renee could barely speak. I hope they’re in better health when next I see them.

I signed books for a whole bunch of fans while handing out fliers for the not-yet-released-at-the-time Black Lightning Volume One and Marvel Masterworks: The Champions. Some of those fans were frequent customers of my Cosmic Comics store in the late 1970s and through the 1980s. Suffice to say, they miss the store much more than I do. Someday, when I write about my years owning and operating the best comics shop in Cleveland, you’ll understand why I have very mixed feelings about that period of my life.

Ethan Roberts, noted comic art collector, historian and scientist, stopped by my table. Ethan and I go back a long way and he always had some interesting information to share with me. This time out, we ended up talking biology/zoology in an impromptu consultation on a villain I’m creating for one of my “bucket list of things I want to write before I kick the bucket” projects. It’s a good thing to know smart people.

Back when I was running Cosmic Comics and working for Capital City Distribution, Dave Kapelka of North Coast Nostalgia was, as I saw it, the best of my comics shop competitors. We’ve been friends for a long time and, though he’s semi-retired these days, he sometimes sets up at shows. We talked old comics and, specifically, some of the oddball titles I collect when circumstances permit. He seemed puzzled by my love for The Barker, a circus-based comic published by Quality. I can’t explain it myself, but circus things do hold a certain fascination for me.

There were lots of other comics industry friends at Wizard World. I know I’m going to inadvertently leave someone out, but the list included Joe Rubinstein, Marc Sumerak, Joe Corroney, Dave Aikins, Josh Blaylock, Martin Egeland and the afore-mentioned creators that I inadvertently left out. While seeing comics creators and fans is the best thing about conventions, there’s  never enough time to see all of them. Maybe next year?

A few columns back, we talked about why I like Wizard World events. I’m not backtracking on that. Wizard does shows their way and it’s obvious a great many fans enjoy attending them. Take these Wizard conventions for what they are. If they aren’t to your liking, then go to conventions more to your tastes.

Me? I’ll be coming back to Wizard World Cleveland as long as they invite me. See you next year.

Coming up soon will my reports on my visit to the Cleveland State University Comic Book Club and Dayton’s Gem City Comic Con. Coming tomorrow will be information on my next convention appearance and a list of my other scheduled events this year.

Once I catch up on these reports, I’ll be back to my usual mix of news, views and reviews. Thanks for following the bloggy thing as we get ever closer to one million views.