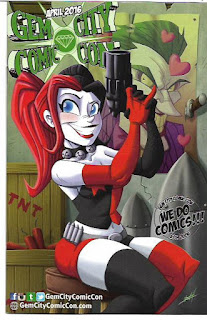 Gem City Comic Con has been around for close to a dozen years and has earned a reputation as being one of the best comics-centric events in the Midwest. When Jesse Noble, the guy who created this show and who calls Roger Price’s legendary Mid-Ohio-Con one of his inspirations, invited me to attend the two-day event (Saturday, April 2 and Sunday, April 3, at the Dayton Convention Center), I checked my schedule and accepted. That was a good choice.

Dayton is about three hours from my Medina home. Outside of running into some rain during the drive, it was a pleasant journey. Though the convention center has a small-ish loading dock, it was fairly easy to get my table stuff into the event and then head over to the Crowne Plaza Dayton, which is where I would be staying. There was a walkway connecting the hotel to the center.

DIGRESSION. Remember yesterday’s bloggy thing on convention centers and hotels that are not worthy of the comics events they host? It was this convention center and this hotel that convinced me it was time to write that column. Neither was worthy of the show Jesse has created. We will avoid the subject as much as possible for the rest of this con report.

Gem City offered a huge floor space for guests, vendors and gaming contests. There were plenty of guests and vendors, but also plenty of room to walk around the tables without feeling confined. I was set up in a guest row that included Bob Hall, Joe Staton, Mike Norton, Dan Parent and others.

After stacking my boxes behind my table - I planned to do the real set-up the next morning - I strolled around the room to say hello to some of the many dealers I’ve met over my decades of attending conventions and, especially, the nearly two decades I spent doing this and that for Mid-Ohio-Con. So, when I say a show reminds me of Mid-Ohio-Con in some ways, it’s about the highest compliment I can give an event. Gem City reminds me of Mid-Ohio-Con in some ways and I had a sense of that almost immediately.

The dealers were still coming in and setting up. I sported a couple booths I wanted to shop at on Saturday. I did manage to drop some cash at one of them, but I don’t want to get ahead of my Gem City Comic Con report.

I was beat by the time I checked into my hotel room. Any thoughts of exploring the area vanished while I unpacked. I ordered chicken noodle soup and a burger from room service, did some unsatisfactory channel-surfing while waiting for my meal, ate and put the remains of my sandwich in my room’s small refrigerator and quickly drifted off to sleep. Through no fault of the hotel, I did not sleep well. I woke up once about the time my cat would be demanding attention at my Medina home (2:30 am) and again at the time my wife would be getting up for work (5:30 am). I have an internal alarm clock and I hate it a lot.

When I woke up the second time, I figured I’d polish off the rest of my burger. It was frozen solid. In all my stays at hotel, it had never occurred to me to check the setting on a refrigerator before I put anything in it. The previous guest or perhaps a mischievous housekeeper had set the refrigerator to its coldest setting. Even my Boost nutritional drinks were now blocks of ice. After making myself as presentable as humanly possible, I went to the hotel’s breakfast buffet. The restaurant was large with great views of the city. The buffet itself was bland and disappointing.

Taking the walkway to the convention center, I ran into Jay Fife, a talented artist I’ve known for years and who is on my bucket list of people I want to work with. We’ve come close a time or two, but haven’t quite managed. Seeing old friends is one of the best things about any convention, so I was in good spirits when I entered the Gem City show floor in those pre-opening hours.

I set up my table and started pricing a stack of Isabella-written comics. Even working from a two-year-old edition of the Overstreet Comic Book Price Guide, I was astonished by some of the prices some of my 1970s work now commands. The first issue of Astonishing Tales with “It! The Living Colossus!” now goes for fifty bucks in near-mint. Now that’s astonishing!

The rest of my table set-up consisted of the double-sided Superman poster I helped design for 1988's International Superman Exposition in Cleveland, a box of random books priced at a buck apiece, spiffy fliers for the new Godzilla movie opening in Japan this summer, a box of Isabella-written comics and a woefully few advance copies of Black Lightning Volume One, which wouldn’t be arriving at the comic shops until Wednesday. My set-up didn’t take long.

I had planned to visit several vendors before the show opened, but my attention and disposal cash were drawn to a booth offering great prices on a vast selection of hardcover collections. I got a box-full of slightly damaged Dick Tracy books at prices ranging from $4 to $10. Somehow I managed to resist the urge to return to that and other vendors during the convention. I envy the fans who would get to shop all those wondrous displays.

Before the show started, my long-time Facebook pal Paul Carbonaro came over for our first face-to-face meeting. Paul was designated to be my handler during the weekend and he’s the kind of tireless volunteer a convention is lucky to have. We had many conversations and, though we don’t agree on every comics issue, I enjoyed hanging out with him. Good times.

I had steady sales with the Black Lightning trades going within an hour of the show opening. I should have a better supply of them at  the rest of my 2016 appearances.

Those Godzilla fliers, sent to me by my Japan-based friend Michael Jones, were a big hit. The fans were amazed by such a unique item and delighted they were free. The fliers were gone by the weekend’s end. It’ll be hard to top them at future conventions.

I signed a whole lot of Isabella-written stuff over the weekend and this came as something of a surprise. When I go to a convention in an area I’ve never visited before, such as February’s Pensacon in Pensacola, Florida, I expect to sign a lot of books. But, though I hadn’t done a convention in Dayton before, Ohio is my home state.  I do a lot of Ohio shows, but I haven’t signed this many of my old comics in years. It was wonderful to meet so many of my readers at Gem City. I hope to return next year.

At high noon on Saturday, the esteemable Carbonaro hosted a “Meet Tony Isabella” panel. We didn’t fill the room, but we had a decent and enthusiastic audience for my stories of my career, my thoughts on comics, politics and other popular entertainments and whatever else the audience wanted to know. I love doing this kind of panel. I hope the fans enjoy them half as much as I do.

There was some amazing cosplay at the convention. I was extremely impressed by a Hawkman and Hawkwoman team and tickled by the many young cosplayers at the show. Alas, there were no Black Lightnings, Misty Knights or Tigras at Gem City this year. Come on, cosplayers. You’re missing the chance to be photographed with your “creator,” and to be immortalized in this bloggy thing and in the memoirs of sorts I’m writing.

One of the many bright spots of the convention was seeing Mark Waid for the first time in way too many years. I’d briefly seen Christy Blanch, his partner and a fine writer herself, at last year’s Indy Pop Con, but Mark had not been at that show. It was a blast talking to them, but, little did I know that, on the second day of the Gem City Comic Con, Mark and I would do battle.

Oh, look, I’ve reached the end of today’s bloggy thing. Come back tomorrow for "Waid versus Isabella" and so much more.