While chatting with crazy great colorist Paul Mounts at the Detroit
FanFare, he called me the “Commissioner of Comics.” I knew what he
was referring to, but only because I had come across this artifact
in an old file cabinet: 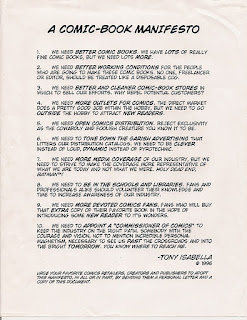 This manifesto first ran in a 1996 issue of Comics Buyer’s Guide.
It got some favorable attention at the time.  Cocky guy that I am,
I printed up copies of it to hand out at conventions. I don’t know
if anyone actually sent their favorite comics retailers, creators,
and publishers my manifesto.  It was talked about for a few weeks
and then, as such things do, it faded from the conversation.
I’d forgotten about it until it surfaced in that old file cabinet.

Looking over my manifesto, beyond wincing at the odd typo, it seems
to me that some of what I “demanded” has been accomplished to some
degree or another.  However, what I’d really like to learn is what
YOU think.

Were these “demands” worthy demands then and are they still worthy
demands today?

Has the comics industry accomplished these goals?

This is more than some desperate ploy to get you to comment on this
blog.  I’m really interested in what my readers, some of who are
probably seeing this manifesto for the first time, think of what I
wrote back then and how it might apply (or no longer apply) to the
comics industry in 2011.  I want to hear from you.

I’ll even make it worth your while.  I’ll send an autographed comic
book or trade paperback to the writers of the five best comments I
receive on this subject.  I’ll even throw in one of my certificates
of authenticity verifying that whatever comic or trade you get is
from my Vast Accumulation of Stuff.