THE FATE THAT AWAITS YOU 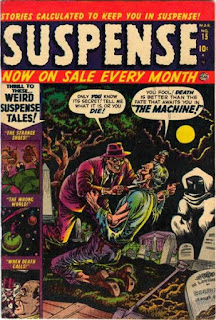 ﻿Suspense #15 [March 1952] is another one of those cool Atlas horror
comics from the 1950s.  The title started out as a crime comic, but
switched to horror with its third issue.  The cover, complete with
those spiffy side panels, was drawn by Joe Maneely.  Thanks to the
Grand Comics Database and the Atlas Tales website, I have a pretty
good lists of credits for this issue’s contents.

“The Machine!” (6 pages). Both Atlas Tales and the GCD guess that
Werner Roth is the pencil artist of this story, but the GCD takes
a wild flight of fancy by also guessing Roth as the writer.  Since
I’ve never heard of Roth writing comics or anything else, I’m not
inclined to give that guess much weight.

Take a look at the cover, which illustrated this story.  What I’m
guessing is the machine of the title looks a little bit like Moon
Knight from the 1970s and beyond.  Oh my gawd! It’s a prototype for
the character! Alert Overstreet! Raise the price of this issue to
meet the surely-increased demand! Or not.

“The String of Pearls” (5 pages) was written by Hank Chapman and
drawn by Ogden Whitney.  Both gentleman signed their work.

“The Wrong World” (6 pages). Both Atlas Tales and the GCD guess the
artist is Pete Tumlinson.

“Death Comes Calling” (4 pages). Both the GCD and Atlas Tales guess
the artist is Bill Savage, though the latter website only has him
as the pencil artist.

Suspense ran for 29 issues from December 1949 to April 1953.  Keep
watching this bloggy thing for more vintage comic-book covers from
my birth month of December 1951.  As always, I’m very interested in
more information on these comics and also in trading for copies of
them.  You can reach me by e-mail.

Papercutz publishes comics albums suitable for kids of all ages and
those albums come from Europe and the United States.  Jim Salicrup
is the editor-in-chief.  In the interest of full disclosure, he’s
also a long-time friend of mine and someone I’ve worked with quite
happily at Marvel and Topps Comics.

Digression. You can safely assume I’m friends or at least friendly
acquaintances with many of the editors, writers and artists whose
works I review here.  That’s a natural consequence of my over four
decades in the comics industry and my winning personality.  While
this doesn’t affect my reviews in the slightest, it’s something I
feel I should mention from time to time. End digression.

I read a handful of Papercutz albums in recent weeks.  Their books
are handsomely and sturdily made, especially their hardcovers.  I
believe they can survive multiple readings by even young readers,
an important consideration for gift-givers.

My favorite of these albums was Ernest & Rebecca #3: Grandpa Bug by
writer Guillaume Bianco and veteran Disney artist Antonello Dalena
[$10.95]. Ernest is a microbe (germ) and the best friend of young
Rebecca, a feisty young girl whose parents have divorced and who is
not having an easy time with that.  Ernest might be an imaginary
friend, but he can be seen by Rebecca’s grandfather as well, so I’m
giving him the benefit of the doubt. The funny, heartwarming series
was originally published in France.

Digression the second. In the beloved Sugar and Spike comic books
by the legendary Sheldon Mayer, really old people could understand
the baby-talk language of the infant stars.  Mayer explained this
by saying the old people were living their second childhoods. That
isn’t precisely the situation with Grandpa Bug, but he does express
a child-like exuberance that contrasts wonderfully with his simple
and vast wisdom.

Rebecca and her big sister Coralie are visiting their grandparents’
rural home. Rebecca misses her artist father terribly and hasn’t
seen her friend Ernest for a while as the book opens.  She doesn’t
care much for her mom’s fiancé, but that’s largely because he isn’t
her dad and his presence back home makes it clear her parents will
not be getting back together.  Coralie misses her boyfriend and the
cell phone reception that would, at least, let her keep in contact
with him. They are not happy young ladies.

However, before the end of this book, Rebecca will have some fine
adventures with her adorable Grandpa Bug, make some new friends and
reunited with Ernest.  She and Coralie will also get closer in the
relative wilderness - in reality, a charming region with a really
cool little village - into which they have been cast in the name of
vacationing with their grandparents.

Bianco’s writing - translated by Joe Johnson - is terrific, filled
with humor and humanity.  Readers will fall in love with Rebecca
and Grandpa Bug in a matter of pages.  The art and storytelling of
veteran Disney artist Dalena are likewise inviting, coupled as they
are with the warm hues of colorist Cecilia Giumento.  Even at the
6-1/2" by 9" size of this book, Janice Chiang’s lettering is always
easy to read. I loved this book so much that, as broke and cheap as
I am, I ordered the first two books from Amazon. I might even share
them with my future grandchildren someday.  I aspire to be as cool
as Grandpa Bug.

Dance Class #2: Romeos and Juliet and Dance Class #3: African Folk
Dance Fever by Beka and Crip ($10.99 each) are centered around Miss
Anne’s dance class and the young ladies she instructs.  Julie, Alia
and Lucie and their less charming classmate Carla are the stars of
this series. The albums are a mix of single-page gags, not unlike
a newspaper’s Sunday comic strip, and slightly longer continuities.
Though my knowledge of dance consists of having watched my daughter
perform when she was in grade school and wishing TV’s “Dance Moms”
would spontaneously combust whenever my wife watches that program,
I got a kick out of these books and their young heroines.

My favorite of the girls is Lucie.  She’s a “ginger” like my Kelly.
Her parents are divorced - Papercutz does reflect the real world -
but Beka and Clip play it for honest laughs.  At recitals, Lucie’s
parents sit on different sides of the audience and try to applaud
and cheer louder than each other.  Lucie struggles with her weight
because both parents try to feed her better than the other.  When
Lucie finally tells them to stop this because she’s trying to lose
a little weight, they practically starve her to death trying to be
more helpful than the other.  This humor has a gentle bite to it.

Crip’s art is wonderfully expressive, especially when depicting the
dancing.  The sequences where the girls are learning and performing
the African folk dances are delightful.  Kudos also go to colorist
Maela Cosson, letterer Tom Orzechkowski and translator Joe Johnson.
I fear I’ll soon order the first book in the series. It’s another
winning French import from Papercutz.

Digression the third. Each of these Papercutz books has an inviting
editorial page by Salicrup, who learned to connect with his readers
during his time at Marvel.  That personal stamp speaks well of his
commitment to those readers and these books.

Ariol: Just a Donkey Like You and Me [$12.99] comes with impressive
credentials.  Emmanuel Guibert, who won the Essentials of Angouleme
award for The Photographer, and artist Marc Boutavant have received
critical acclaim for their past work.  That this is the first team-
up is something of an European comics event.  But this collection
of stories about a little blue donkey and his friends doesn’t speak
to me as did the other Papercutz series.

Aroil and his friends are basically school kids in animal form and
I was put off by some of their attitudes towards themselves and the
other species.  At times, Ariol wishes he weren’t a donkey, but a
more magnificient species.  The modernistic art, which is the best
description I can manage for Boutavant’s style, leaves me cold as
well.  Your mileage may well vary.

Digression the fourth. These are reviews, not commandments.  What
I love might not please you.  What I dislike might float your boat.
I am but a humble guide through the amazing wonders to be found in
this best of all times for comics readers.