LOBO AND THE COCKEYED WONDER 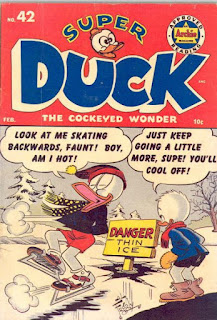 ﻿Created by Archie Comics staff artist Al Fagaly in 1943, Super Duck
was an odd duck from the get-go.  He was a super-hero parody at the
start of his surprisingly long time in comics, but quickly switched
to less fantastical stories.  Basically, he started out as a super-
hero wannabe and became a Donald Duck wannabe.  He managed to hang
on in his own title into 1960 and reprints of his stories sometimes
appear in the Archie digests.

Super Duck Comics #42 [February 1952] hit the comics racks in the
month of my birth [December 1951]. Super Duck is wearing the weird
outfit which was his trademark.  Wikipedia describes it as “a black
shirt, red lederhosen and often an Alpine hat.” The young duck on
the Fagaly-drawn cover is named Fauntleroy Duck.  His girlfriend -
not shown on the cover - is Uwanna Duck.  I don’t think Uwanna was
related to him, but who knows what was the case in this sometimes
kinky series.  It made enough of an impression on underground comix
legend Robert Crumb that he draw his version of the characters in
Mystic Funnies #3 [2002].

This 52-page issue had five Super Duck stories of varying lengths,
all drawn by Fagaly.  The Grand Comics Database doesn’t have any
writer credits for these stories, but we know Jack Mendelsohn was
writing Super Duck stories in 1948 and 1949.  Among the supporting
characters and villains in these tales are Carrie DeCoffin, Count
Dekash and Will Proffitt. Also in the issue, a Cubby the Bear story
drawn by Red Holmdale and a bunch of filler features ranging from
puzzles to movie news.

The Stupid Comics website has a hilarious piece on Super Duck with
lots of examples illustrating its weirdness.  It’s worth checking
out.  While I’ve generally skipped over Super Duck reprints in the
past - the character’s visual gives me the creeps - I think I’ll be
reading them closely going forward.

Keep watching the bloggy thing for more vintage comic-book covers
from my birth month.  As always, I love to learn more about these
comics and am willing to trade for good condition copies of them.
E-mail me if you’re interested.

Since writing the above, I have sliced my thumb while cutting some
fruit and spattered hot grease on my chest while cooking meat.  My
current goal is to not injure myself any further until my Sainted
Wife Barb gets home.  Why should she miss out on the fun?

As a matter of ethics, I don’t believe in reviewing comics or books
while I’m bleeding or while my skin is peeling off my body.  Which
leaves us with my old standby of going to my files for some crazy
thing to share with you.

How about a Lobo pitch?

Sorting through ancient files while moving them into my new office
file cabinet has been a revelation. I pitched a lot of stories that
I still think were as good or generally much better than what the
editor(s) were publishing at the time.

Now Lobo is not a character I have ever cared for but, when I came
up with this silly notion in late 1991, I got a chuckle out of Dick
Giordano.  My best friend and sometimes collaborator Bob Ingersoll,
then a working attorney in the public defender’s office, also liked
the idea, which was good since I wanted Bob to write this one-shot
with me.  Here’s the cover letter I sent to the editor:

I got a chuckle out of Dick Giordano with the enclosed, which is
why I’m sending it to you as an actual submission.  It’s pretty
much self-explanatory.

I wish I could say that my motives in submitting this to you were
as wholesome as, say, greed, but the fact of the matter is I just
wanted an excuse to kill a bunch of lawyers in print.  This seemed
to be a reasonably socially acceptable way to do that.

I haven’t asked Ingersoll about his motives for working with me on
this.  I’m hoping they do involve greed.  Considering that he’s a
lawyer himself, the alternative is probably sick and demented.

And, hey, how’s this for an endorsement:

“WASHINGTON - Watching a movie starring professional wrestler Hulk
Hogan, President Bush says, helped him understand more clearly how
the legal system has ‘spun out of control.’ After the laughter
ended, Bush said, ‘The fear of outlandish litigation has begun to
strangle the American dream.”“

We could use that quote in the advertisements.

LOBO: LET’S KILL ALL THE LAWYERS
springboard for 48-page one-shot

Lobo faces the deadliest challenge of his life.  He’s about to be
sued out of existence!

Picture a society of planets far more advanced than our own, so
advanced that they have banished all their lawyers to a quarantine
world where they can only bothers others of their insidious kind.

Cosmic chance strands Lobo on this malevolent Planet of the Lawyers
where he runs afoul of its top litigator, Slugg, the senior partner
of the firm of Slugg, Slugg, Slugg, Slugg, Slugg, Slugg and Slugg.
All of the firm’s partners are clones of Slugg. Slugg brings suit
against Lobo and, in a world where the law is supreme, that could
be a particularly nasty termination for our manic marauder.

Trapped on an insane planet, Lobo figures his only chance for his
survival is to “kill all the lawyers.” At least until he can find
one attorney willing to go up against Slugg in the planet’s Court
of No Return.  Watch for alien versions of such notable fictional
attorneys and judges as Perry Mason, Matlock, the cast of L.A. Law
and even comicdom’s own Daredevil and Judge Dredd as Lobo battles
and slaughters in the name of justice.  If the law is a ass, then
it’s in for some serious kicking when Lobo cuts loose.

QUERL DOX: Lobo, you just slaughtered over ten thousand lawyers!
What do you call that kind of behavior?

If you were wondering, I came by my dislike of attorneys honestly.
But I’ll save that explanation for tomorrow’s re-presentation of a
Comics Buyer’s Guide column from early 1994.