NOT THE BEST AMERICAN COMICS 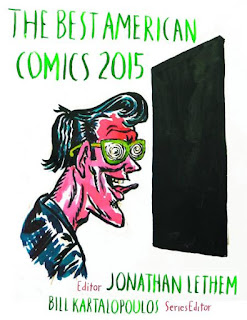 Why do I keep doing this to myself? Among other accomplishments, Albert Einstein defined insanity as “doing the same thing over and over again and expecting different results.”

So why I do I keep reading each annual edition of The Best American Comics and expecting it to be something other than an artsy-fartsy pretentious anthology of comics that are as far from being the best such comics as I am from playing power forward for the Cleveland Cavaliers?

I saved myself $25 by getting The Best American Comics 2015 from my local library system. This year’s guest editor was Jonathan Letham, who gave me some hope with two innovations. First, he divided the various comics and excerpts into sections based on subject matter and other considerations. Second, his introduction to the book and each section were in the form of comics. Raw squibbles that didn’t hold up past the first few, but comics nonetheless. In addition, I was pleased to see the first entry was an excerpt from Roz Chast’s brilliant Can’t We talk About Something More Pleasant? and the next was an excerpt from Jules Feiffer’s good-but-not-brilliant Kill My Mother. It was a good start. More accurately, it was a good start that just increased my yearly dismay with this series.

Series editor Bill Kartalopoulos makes his contempt and disdain for mainstream comics clear from his foreword. Letham reinforces that contempt and disdain in his introductions. Neither has any use for any of the well-told, beautifully-drawn comics stories from Dark Horse, DC, Image, Marvel, Oni or any of a dozen publishers, large and small, I could name. This faux-elitist anthology is oh-so-far above that sort of thing.

Amusingly, a section devoted in part to mocking super-heroes was to include a story by Steve Ditko, whose current work is, to be kind, is best appreciated by Ditko cultists. Ditko refused permission for his work to be included.

In the past when I’ve raised these issues, apologists for The Best American Comics have claimed they were unable to obtain rights to use mainstream material. It’s a lie revealed by the book’s “Notable Comics” listings, which include nary a mainstream story. No Usagi Yojimbo. No Lumberjanes. No Chew. No Ms. Marvel. No Daredevil. No Saga. No The Fade Out. No Fables. No Resident Alien. No any of the dozens of other mainstream comics that are better written and better drawn and more meaningful that 95% of what Kartalopoulos and Letham did include.

It’s long past time for comics creators and publishers to raise a middle finger to The Best American Comics and create an anthology of their own. Put aside company and professional rivalries and work together. Recruit rotating editors from the many sage commentators who haven’t stuck their heads so artistically up their faux-elitist asses. Maybe make this new annual anthology of the finest American comics a fundraiser for the Hero Initiative.

We need an annual anthology that recognizes great comics by great creators ranging from Derf Backderf and Carol Tyler to Stan Sakai and G. Willow Wilson. And I think we all know I could list over a hundred such worthy creators.

My pledge. Right here and right now. I will buy such an anthology every year without fail. I will promote it in every venue available to me. I will do whatever I can do to make this concept a reality.

It’s not just time for such an annual anthology.