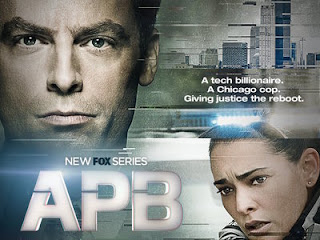 Cop fiction. Veteran readers of this bloggy thing will recall I’m a big fan of cop fiction and have been since my days in the Marvel Bullpen. On at least one occasion, Don McGregor did a reading from an 87th Precinct novel by Ed McBain. That got me hooked on McBain’s books and cemented by love of the kind of sort of genre.

Two of my all-time favorite TV shows are NYPD Blue and Hill Street Blues. Depending on how long such a list would run, you’d see many other cop shows on it as well.

I love mixing cop fiction with super-heroes, the supernatural and science fiction. Gotham Central. Lucifer. Robocop. Just to name a few such pairings.

So when a show like Fox’s APB comes along with this premise...

After witnessing his best friend's murder, a tech billionaire makes an unprecedented deal to privatize the troubled local police force and transform it with cutting-edge technology, challenging Chicago's 13th District to rethink everything about the way they fight crime.

Some critics of the show have called it derivative. That’s not an unfair observation. When Justin Kirk plays Gideon Reed, there are clear echoes of Robert Downey, Jr.’s portrayal of Tony Stark from Iron Man and all those other Marvel movies. However, to the credit of Kirk and the writers, the character is convincing when his best friend dies in his arms, when he tries to bond with the officers under his command, when their initial rejection of him and his tech hurts him, when he realizes the mayor really wants him to fail and when he becomes fully conscious of the enormity of the task he has undertaken. As long as Kirk and the writers keep the cockiness and the seriousness in equal measure, the character will continue to be real to the audience.

Natalie Martinez is excellent as Amelia Murphy, her name likely a nod to Robocop. She has played many detectives and police officers in her career. She has the cop role down. What distinguishes Murphy from Martinez’s other cop roles is that she appears to be a single, divorced mother sharing custody of her son with said son’s father. It’s underplayed, though we definitely saw her mother’s dislike of the father in the brief scene. With Murphy being the only regular character shown to have a life outside of the police work, this is a part of her life that needs exploring.

“Murphy” is not the only nod to Robocop. There is a Robocop vibe to this pilot. Less dystopian, but still there.

Three more actors worth mentioning here. Ernie Hudson, who has been a favorite of mine since Ghostbusters and who has shown incredible range over his career, plays Sgt. Ed Conrad. Not much was done with Conrad in the pilot. That should change because Hudson could be a major asset to the series.

Nestor Serrano as the slimy Mayor Michael Campos brings the evil to the show. He’s appropriately dismissive when Reed first makes his proposal, quietly seething when he realizes Reed has left him no choice but to agree to the proposal and downright menacing when he realizes Reed is a threat to his power. He’s a worthy adversary for Reed and I hope the writers keep the character away from any ties to crime families or some such. He’s a callous politician. That’s plenty of evil for one character.

Kevin Chapman isn’t a regular, but the Internet Movie Database has him appearing in at least three episodes. He played Fusco in Person of Interest. The man just looks like a cop who has seen too much of it all, but is still in the fight. I hope the series makes use of Chapman’s talents.

The technological centerpieces of this series are the APB app that allows citizens real-time communication with the police and the advanced drones Reed puts into the field.

This amazing app comes with drawbacks. Some people can’t resist the urge to try it out whether there’s an emergency or not. I suspect “crying wolf” will be a part of other episodes as well. Because, in the real world, even without such technology, police departments do get bogus calls and even well-intentioned false calls.

The drones are very visual and, by the end of the episode, they are upgraded to be more effective. There are lots of ways to go here. Drones could be hacked. Drones could be protested as an invasion of privacy. Drones could be misused by police officers for their own personal benefit.

The pilot episode is shy on stunning moments. Reed tries too hard. Some things don’t go as planned. A rookie officer gets injured on the job. Reed has a brief crisis of confidence. The mayor tries to bully the billionaire. But, by the end of the episode, the killer of Reed’s friend is brought to justice. That’s when we get a pair of great moments.

The first is when Murphy asks Reed what happens next. He’s got what he wanted - justice for his friend - but what happens next. And I think this is the start of Reed maturing from brilliant dilettante to committed police commander.

The second is when, following this initial success of the APB app, their board lights up with calls from all over the city of Chicago. The 13th District was meant to be a test precinct. But the entire city wants in on this new technology. That scene of that big board lighting up is nothing short of amazing. It make me downright eager to see what happens next.

APB has a solid premise. It’s got several outstanding actors. The pilot might not have been as solid as the premise, but it was good enough to bring me back next week. For now, I’m in.

Some additional notes from IMDb and elsewhere:

Following the departure of series creator David Slack over creative differences, Matt Nix has hired to be the new show runner. Nix is the creator of Burn Notice and The Good Guys, both of which I liked quite a bit.

IMDb claims the series is...Based on New Orleans sanitation magnate Sidney Torres and his formation of the French Quarter Task Force, a semi-privatized police force he created to deal with the rise of crime in his neighborhood after Hurricane Katrina.

Also from IMDb...The drone Gideon demonstrates at the beginning of the episode has the code name "TK421". This is the designation of the stormtrooper Luke Skywalker impersonates on the Death Star in Star Wars: Episode IV - A New Hope (1977).

Posted by Tony Isabella at 9:32 AM