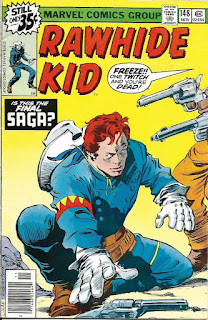 RESOLVED: The Rawhide Kid is my favorite western comics character and one of my favorite comics characters period.  This is why I’ve written over a hundred columns about him. Something about his short stature, but large courage, honor and fighting skills speaks to me.  After rereading the Kid’s earliest adventures when Marvel reprinted them in a pair of Marvel Masterworks and an Essential Rawhide Kid volume, I decide to reacquire every Rawhide Kid comic, reread them and write about them. We’ve reached the title’s extended twilight.  We’ve seen the last new Rawhide Kid story that will appear in the now-bimonthly reprint series. This is the 135th installment of my “Rawhide Kid Wednesday” columns.

The Rawhide Kid #148 [November 1978] has a cover by Gene Colan and inker Joe Rubinstein. A blurb asks “Is This the Final Saga?”, which is the kind of thing Marvel used to put on the last issue of some titles. Though Rawhide Kid would run three more issues beyond this one, I can’t help but wonder if this issue was originally intended to be the last issue. 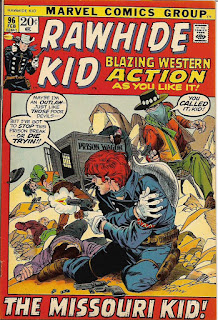 This issue reprints “The Kid from Missouri” (14 pages) from Rawhide Kid #96 [February 1972]. The cover to that issue was pencilled by Gil Kane and inked by Bill Everett. The story was written by Gary Friedrich with pencil art by Dick Ayers and inks by Everett. When I wrote about this story on July 20, 2016, I opined that it was the best Rawhide Kid story that wasn’t written by either Stan Lee or Larry Lieber. You can read that column here. 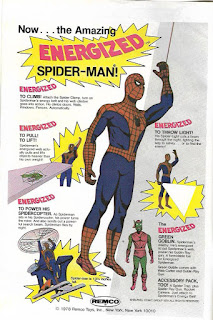 The inside front cover has an ad for the Amazing Energized Spider-Man! The thirteen-and-a-half inches tall toy comes from Remco and the company also offers an energized Green Goblin. You can learn a bit more about these figures here and, if you search YouTube, you might be able to find some of the original television commercials for the toys. 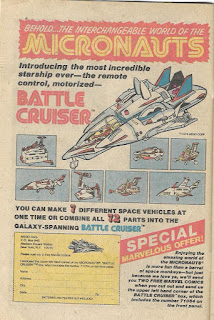 Mego has a full-page ad for the Micronauts Battle Cruiser. It has 72 parts which can make seven different vehicles. If you bought the toy and sent Mego the upper left corner of the Battle Cruiser box, they would send you two free Marvel comics.

There are two-and-a-half pages of classified advertisements, which is up half a page from the previous issue.  Besides the usual pitch for ad for 3 mil comics storage bags for three bucks per hundred., there are 25 ads for mail-order comics dealers. That’s three more than last issue. 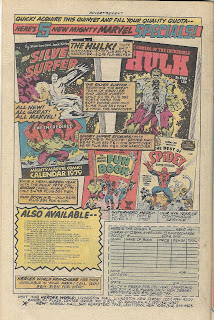 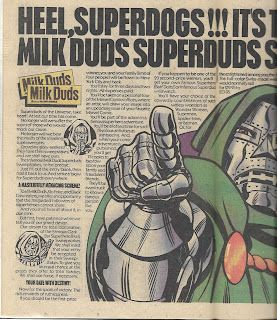 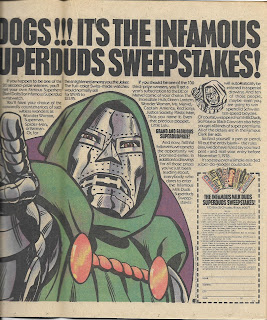 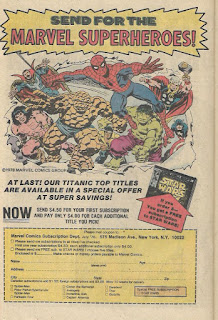 A full-page subscription ads offers super savings on Marvel’s top titles. If you ordered five subscriptions, you got a free sub for Star Wars. 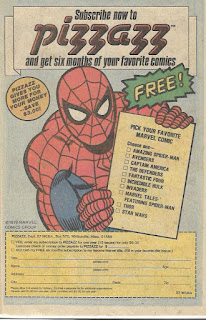 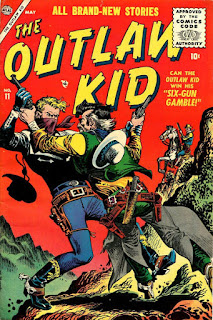 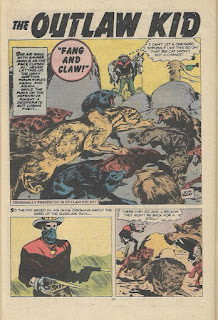 “Fang and Claw” (4 pages) was drawn by Doug Wildey. The writer has not yet been identified. This is the third reprinting of the story. It also appeared in Outlaw Kid #4 [February 1971] and Outlaw Kid #24 [October 1974].

The Outlaw Kid is the Puma Whisperer. He comes across a puma under attack by a pack of other critters. He fires his guns to chase the attackers away. The puma stays long enough to snarl at his rescuer and then takes off. Thinks the Kid:
“It’s funny with the big cats! They’ve got pride and they’re independent, too! He probably even resents my coming to his aid!”

Hearing gunfire, the Outlaw Kid rides to investigates. The sheriff requests his help in tracking down escaped killer Jase Casey, who is holed up in the hills. They find Casey, but the high ground has the lawmen at a disadvantage.

The Outlaw Kid makes his way up into the hills, but Casey gets the drop on him. Just then, the puma from the start of the story leaps from a rock and knocks Casey down. The big cat doesn’t disembowel the criminal. That’s odd behavior for a predator, but our hero has it all figured out:

“They’ve got pride...he was paying me back! Just like a man with a lot of pride...I reckon he doesn’t want to be in debt to anyone!”

I like this strange little story a lot. I wish I knew who wrote it. 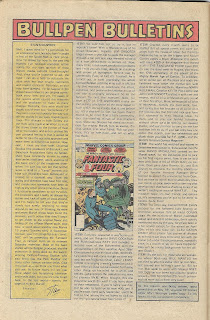 This month’s “Bullpen Bulletins” page announces the wedding of Dave Cockrum and Paty. It also offers condolences to family and friends of legendary DC Comics editor Mort Weisinger. In “Stan’s Soapbox,” the esteemed “The Man” talks about the difference between the Hulk and Spider-Man comics and the Hulk and Spider-Man television shows. Because the Jim Shooter era brand of hype doesn’t appeal to me, I have reproduced the entire page above. 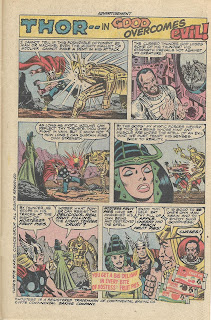 This month’s Marvel/Hostess single-page crossover ad features Thor in “Good Overcomes Evil!” Good is represented by Hostess fruit pies that break an evil scientist’s mind control over a fellow Asgardian warrior. Hmm...maybe we can start feeding those tasty tweets to the Trump supporters. 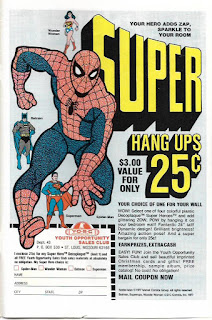 The inside back cover offers Super Hang Ups, a three-dollar value for a quarter. This is a come-on from the Youth Opportunity Sales Club. The quarter would bring you one of the four available super-hero plastic figures and free club sales materials. The choices of the former were Spider-Man, Wonder Woman, Batman and Superman, each standing 24" tall. As for the sales material, the ad states they come with absolutely no obligation. 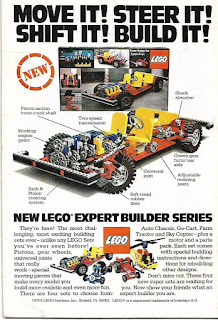 The back cover has an advertisement for the new Lego expert builder series of sets. It adds to the already impressive roster of paid ads from high-profile outfits.

There are only three more issues before Rawhide Kid ends its long run. Depending on how quickly I bounce back from Pensacon, I’ll be back next week with a new “Rawhide Kid Wedneday.”

Have a rip-roaring day, my friends.

Posted by Tony Isabella at 7:43 AM