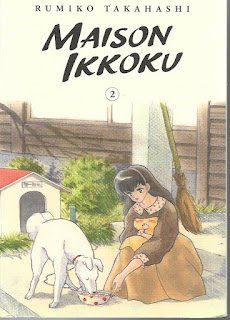 Manga is as large a part of my comics reading as any other kind of comics or graphic novels. I’m currently re-reading Maison Ikkoku by Rumiko Takahashi in Collector’s Editions ($24.99 per volume) from Viz Media. I’m discovering anew why the series continues to be one of my comics series of all time. Here’s a brief synopsis of Maison Ikkoku from Amazon:

Yusaku Godai didn’t get accepted into college on the first try, so he’s studying to retake the entrance exams. But living in a dilapidated building full of eccentric and noisy tenants is making it hard for him to achieve his goals. Now that a beautiful woman has moved in to become the new resident manager, Godai is driven to distraction!

Maison Ikkoku is a romantic situation comedy with a slightly crazed cast of characters. Manager Kyoko Otonashi is a widow who was much younger than her late husband. She’s remained close to his family. They own the apartment building. She’s just a bit older than Godai. As the series opens, her only serious relation is with a dog named after her husband.

The tenants are the proverbial wacky neighbors. A noisy mother with a young son. A flighty young woman. A creepy neighbor who cuts an opening into the wall between his apartment and Godai’s, mostly so he can steal Godai’s food.

Godai is smitten with Kyoko from the start. She is also developing feelings for him, though she’s not quite ready to realize that is what’s happening. Godai has a rival for her affections in the form of a handsome older tennis instructor. There’s also a young woman who sees Godai as marriage material.

The individual stories have hilarious situations and quite a bit of heart. In one of my favorite episodes, an inebriated Godai agrees to take care of a friend’s dog for a few days. This is against the building rules, so he has to do it on the sly. Coincidentally, the dog is named Kyoko. When the dog gets loose, Godai and his neighbors go looking for him. Whenever they call the dog by name, the manager thinks they’re calling for her. No exaggeration, I was laughing out loud as I read this story. 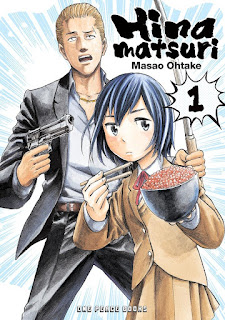 Masao Otake’s Hinamatsuri is a seinen manga series, which means it is marketed toward young adult males. The series follows a yakuza member name of Yoshifumi Nitta who is a kind of sort of “father” to  Hina, a young girl with telekinetic powers who inexplicably showed up in his apartment. It’s eventually revealed that Nina is a girl from the future when other powered girls from the future show up to bring her back or terminate her. It’s a crime family comedy which changes gears at Otake’s fancy.

I got Hinamatsuri Volume 5-7 [One Peace Books; #11.95 each] from my local library system. In Volume 5, Anzu, one of the powered girls from the future, has ended her mission to kill Hina and is unable to return to the future. She’s taken in by a homeless man and much of this book concerns her efforts to make a good life for him and the other people who live in a homeless camp with them. In Volume 6, Hitomi, Hina’s middle school classmate, befriends her. Hitomi is ridiculously kind-hearted, never turns down a request for help and is a natural at whatever she attempts. Which somehow leads to her working as a bartender after school. That she’s amazing at that job does not prevent hilarity from ensuing.

One never knows where Hinamatsuri will go next. Volume 7 ends with a change in the relationship between Hina and Nitta that caught me completely off-guard. I can’t wait to see what happens as a result of this change.

There are a dozen volumes in Hinamatsuri. I’m looking forward to enjoying the second half of this fun manga. 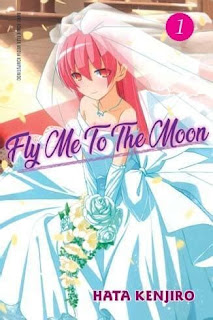 Kenjiro Hata’s Fly Me to the Moon [Viz; $9.99] does not proceed at a lightning pace. Newlyweds Nasa and Tsukasa have been together for the three volumes I’ve wed and they’ve not gone beyond the cuddling and the kissing. Yet that’s part of the charm of the series, seeing these innocents grow together as a couple. From Wikipedia:

On a snowy winter night, Nasa Yuzaki, a boy with a peculiar name, encounters a beautiful girl after he received his practice exam grades for high school. When he tries to talk to her, he gets hit by a truck. After the girl saves him, Nasa miraculously follows her at a bus stop and he confesses his love for her. The girl, Tsukasa Tsukuyomi, agrees to become his girlfriend, but only if they are married first. When Nasa, who had previously decided to not go to high school in order to look for Tsukasa, reaches his 18th birthday, he is still thinking about the promise he made on that night. Suddenly, Tsukasa shows up at his doorstep with a marriage form, starting their relationship and their marriage.

Tsukasa is a woman of mystery. She has strange understated powers. She might be some sort of moon goddess or royalty. Yet she’s happy with the simplest of accommodations. When Nasa meets some members of her family (or perhaps her royal retinue?), the mystery deepens. Of course, as we see in the third volume of the series, Nasa’s own family is a little off as well. I’m enjoying the gentleness, humor and romance of this series.

Fly Me to the Moon won’t be for every manga reader. But, if you’re looking for something different than action and battle manga, this series might make for a nice change of pace.

Fly Me to the Moon Volume 1

Fly Me to the Moon Volume 2

Fly Me to the Moon Volume 3

That’s all for today. I’ll be back soon with more stuff as I work my way back to more regular blogging.

Posted by Tony Isabella at 9:50 AM