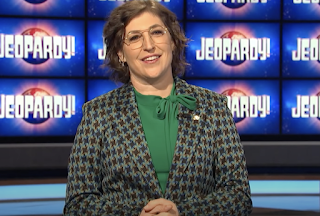 I can’t say I’m a huge fan of yours, but I loved you as Amy Farrah Fowler in The Big Bang Theory. Like every other character in the show, you were a delightful hot mess. You were downright hug-able.

Then there’s Jeopardy. I was skeptical about your hosting this most favorite game show, but you have acquitted yourself well. With the exit of the odious Mike Richards, you have said you would love to become the permanent host of the show. I’m not entirely against the idea, but...

Hosting Jeopardy is more than just being a good host on the show. I look at Jeopardy as a sacred thing. In a world where bad people spread alternate histories and bold-faced lies, Jeopardy is really all about the truth. With every answer/question posed, it is a show that proclaims facts matter. It is a venue in which facts outweigh opinions.

Facts matter. That’s the message of Jeopardy and that’s something I expect those associated with Jeopardy to follow even when not on camera. Which is why I have a problem with you becoming the permanent host...or even guest hosting the show.

You have not sufficiently recanted your anti-vaccination screeds of the past. You boast of being a scientist, but you turned your back on science. And not just on vaccines.

You’re the spritely saleswoman for a “memory-enhancing” concoction of dubious medical value. That doesn’t quite put you in same bad place as oily-like-a-snake Mehmet Oz, but it’s a very uncomfortable position for you to be in if you want to live up to the high ideals of Jeopardy.

And there’s those incredibly hurtful comments you made about women being victimized by serial sexual predators like Harvey Weinstein. If you’ve forgotten them, go to Google. You’ll find them.

Honestly, any of those three situations should disqualify you from hosting Jeopardy. Still, I have come to enjoy your perky approach to the job. I’ve thought about what you could do for me to withdraw my objections to you as permanent or guest host. Here’s what I’ve come up with.

You need to unequivocally apologize for those comments you made in the matter of Weinstein and other serial sexual predators. Make no excuses. You were wrong. You must own that. Then, you must use your celebrity to educate people about these serious crimes. You must do what you can to help the victims of these predators. You must put in the time and the work.

You must stop shilling for dubious memory-enhancing drugs. That is never going to be acceptable for the host of Jeopardy.

You must stop trying to cloud your anti-vaccine past. You need to admit that past and renounce it. You must work to build confidence in the vaccines that have saved countless lives and remain our best hope for dealing with the current deadly pandemic.

I’m asking a lot of you. It won’t be easy. But, despite my harsh, even unkind, comments, I truly am in your corner. I want you to live up to the example of Alex Trebek. I want you to shine as Jeopardy’s permanent host. I want to spend quality time with you every Monday through Friday.

And, at least once, you should wear a tiara on the show. Don’t make any mention of it. Just wear it. It’s a good look for you.

Posted by Tony Isabella at 2:36 PM