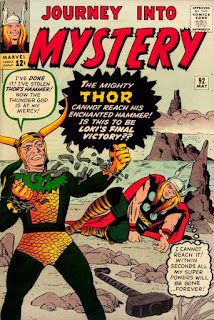 I’m reading and writing about the glorious history and purpose of Loki, the legendary Norse god of mischief, as put forward in Loki Omnibus Vol. 1 [Marvel; $125]. In our premiere installment of this series, we covered the first three Loki appearances in Journey Into Mystery #85, #88 and #91. Which brings us to...

Journey Into Mystery #92 [May, 1963] and “The Day Loki Stole Thor’s Magic Hammer” by Stan Lee (plot), Robert Bernstein (script) and Joe Sinnott (art). Bernstein, who was a prolific writer at DC Comics, Archie Comics and other comics outfits, was credited as “R. Berns.” Such aliases were common in the 1960s as DC Comics, in particular, was not fond of “its” writers and artists working for that upstart Marvel Comics.

This clever story opens with Loki chained to a mountain by Asgard’s Rainbow Bridge. His chains were forged by Odin himself out of the same magic metal as Thor’s hammer. Odin has decreed Loki be chained there until the end of time. Norse gods must have magic bladders as well.
We then switch to Thor on Earth. A criminal was shot in a robbery and his men take him to the office of Doctor Don Blake, the Thunder God’s human identity of the Thunder God. They want Blake to operate on their boss, planning to kill him afterwards. Being a principled man of medicine, Blake saves the robber’s life and then psyches out the bad guys so he can switch to Thor. He ties Blake’s patient and the other criminals to the operating table and uses his hammer to send them flying through the air and to the nearest police station.It’s a great visual, but was that really the best way to transport a person who just had surgery?

Thor travels to a Norwegian sea port to create special effects for a Viking movie. The proceeds from Thor’s participation will go to charity. Thor dispatches a mechanical sea monster by drowning it, which seems improbable to me. Shouldn’t a sea monster be able to breathe underwater? He creates a thunder storm to destroy some evil Viking warrior dummies and then uses his hammer to bring down an actual mountain on a Viking village set. That’s when Loki makes his move.

Loki uses magic to attract the hammer to his chains via magnetism  and shatter said chains. With the sixty seconds before he changes back to Don Blake ticking away, Thor calls on Odin for assistance.Odin appears, which freezes time on Earth, and transports Thor to Asgard. Influenced by Loki’s sorcery, Odin and the Asgardians tell Thor they are too busy to help him find his hammer. I have a lot of questions about Loki’s magic and Asgard’s security measures, but I will get to those in a bit.

This is where this fun little story gets clever. Thor must fend off Loki’s subsequent attacks on him without his hammer. So he starts making substitute hammers. Loki turns giant trees into weapons of destruction, so Thor creates a giant wooden hammer out of stronger wood. Loki turns clouds into dragons, so Thor uses his fingers to carve hammers out of a cliff. Coincidentally, that cliff is made of  the same Uru metal as Loki’s chains and Thor’s hammer.

The makeshift stone hammers are attracted to Thor’s actual hammer. Thor follows them to regain his signature weapon while dropping a dime on Loki. Odin and the other Asgardians take Loki into custody. Odin vows to find a better way to imprison Loki.

My comments and questions...
The Uru metal appears to be more common on Asgard than I realized. The Asgardians don’t do a good job keeping it out of wrong hands.Wakanda must have been laughing its collective ass off looking at Asgard’s lack of security.

How powerful is Loki? He can be chained to a mountain until the end of time without having to go potty. He can cloud the minds of other Norse gods. He can turn clouds into dragons. This is not a guy who should be getting his ass kicked three or four times a year.

The setting for Thor’s hammer search is Loki’s forest. Which Loki controls. So why hasn’t Odin burned this forest out of existence? Use the land for classy Asgardian condos while preventing Loki from turning it into a weapon.

Thor acquits himself well in this story, but Loki should have won on points. Maybe next time... 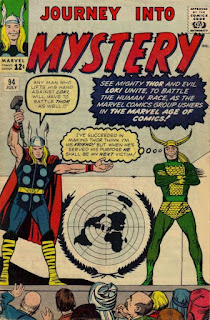 A chained Loki uses his magic to cause a nuclear missile to go out of control. Unable to blow up the bomb where it won’t cause death and destruction, the authorities call Thor to save the day. Which he does by hurling his hammer at it. However, Loki uses the last of his magic to distract Thor and the returning hammer strikes the god of thunder in the noggin. Or, more precisely, Thor’s chromosomatic gland. For anyone who didn’t graduate from a comic-book medical school, I’ll let Loki himself explain:

That means I timed the incident so perfectly that the hammer hit his chromosomatic gland, which determines and changes personality.

Thor becomes a villain and frees Loki. They want to conquer Asgard, but they don’t have enough power to beat the combined might of the other Asgardian gods. Knowing how dear Earth is to Odin, the king of the gods, they tell their dad they will wreck all kinds of godly havoc on our world unless Asgard is surrendered to them.

Thor and Loki don’t pull any punches. Thor destroys a dam, causes earthquakes, jeopardizes ships and triggers a volcanic eruption. He  reduces the Taj Mahal, the Eiffel Tower, a pyramid, and the Leaning Tower of Pisa to rubble. He even seals up the Panama Canal. While the death count from all this must be in the millions, there’s no mention of the loss of human life.

For his part, Loki turns a whale into a sea serpent. He brings the Sphinx to life and sends it to attack Cairo. He makes skyscrapers walk away from their foundations. He brings museum dinosaur models to life. It’s a bad day for humanity.
United Nations representatives beg the rogue gods to intercede with Odin and convince him to surrender Asgard. Until a trapdoor opens up beneath Thor, the brothers don’t realize that these UN fellows are actually Asgardians in disguise. Thor’s magic hammer falls as well, striking him on his chromosomatic gland and turning him back into a hero. Loki is boned again.

The gods promise to repair the damage done by Thor and Loki. Then they make mankind forget this whole thing ever happened. With that kind of power, you’d think they would come up with a new plan for imprisoning Loki. Not a chance, they chain him to the same old tree with the same old chains. Because that will absolutely definitely work this time.

That’s all for today, but I will again seek to fulfill my glorious purpose in the near future and bring you more of the adventures of Loki, god of mischief and/or evil. See you then.
© 2021 Tony Isabella
Posted by Tony Isabella at 11:26 AM