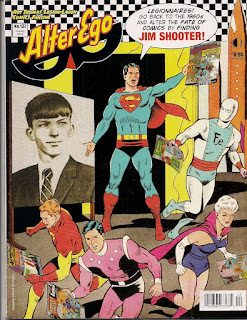 Roy Thomas’ Alter Ego is my favorite magazine bar none, but I would be less than forthright with my beloved readers if I didn’t report that pages 3-31 of issue #137 [January 2016] were problematic for me. Those pages feature an interview with Jim Shooter and Shooter’s alternate reality view of his career and character.

Long-time readers of this bloggy thing are well aware that I have taken issue with Shooter’s version of comics history. Indeed, for  years, one of my most viewed blog entries was “Jim Shooter's Pants Are on Fire.” It has only recently dropped to tenth place on that list, kicked down a few spots by recent entries on Black Lightning and The Best American Comics.

As I’ve written on several occasions, we are all the heroes of our own stories. I’m not particularly surprised that Shooter attempts to relate past events in a manner designed to cast him in the best possible light. It’s when he outright lies that I take notice and exception to his retelling of history. I find no fault with ace interviewer Richard J. Arndt. He asked the questions, but Shooter is responsible for the answers.

Without mentioning yours truly by name, Shooter characterizes me as “a Christian {who was] writing Christian comics instead of super-hero comics.” This is undoubtedly a reference to his tampering with the ending of my two-year run on Ghost Rider, a story designed to remove the supernatural elements from the title and make it more of a super-hero title. Shooter has been trying to either justify that action of his or blame it on someone else for years. He comes up short both ways. Read my earlier blog for the details.

I wrote super-hero comics, as anyone familiar with my Marvel work in the 1970s can attest. Heck, I added super-villains to the Living Mummy strip and made other super-villains Hydra department heads in Daredevil. Some of those moves might not have been the best ideas, but I think they are proof of my super-hero leanings.

As for whether or not I was a Christian...I was raised in the Roman Catholic faith, but hadn’t been a practicing Catholic since before I moved to New York to work for Marvel Comics. I did take a run at a more evangelical Christianity, but I found it as wanting as I did the Roman Catholic faith. In any case, my adding of a Jesus Christ figure to Ghost Rider had nothing to do with my religious beliefs. It had everything to do with believing there should be some sort of supernatural opposition to Satan and all the Satan-like figures in the Marvel Universe and my recognizing people of faith were seldom represented in our comics. Diversity includes a broad spectrum of human beings. Comic books should represent that.

The part of the Shooter interview that gave me the most pause was his cowardly attempt to diminish the late Sol Brodsky, a fine man revered by just about everyone who ever worked with him. Shooter’s characterization of Brodsky’s history with and worth to Marvel is a fiction. That Brodsky’s department was largely beyond Shooter’s reach and a haven for creators who didn’t much care for Shooter or his methods may account for Shooter's dismissal of the man.
Take a shot at me and it’s no big deal. Take a shot at people I love and you’re asking for it.

The saddest thing about Shooter is that his actual history includes some stellar achievements, some real benefits to creators and more than a few humanitarian actions. He has every right to be proud of those. Yet, such is his character that he can’t live with even the slightest blemish to his concept of his history. So he lies and, because he's been caught in so many lies, I find myself questioning everything he relates. Thus, he does himself the greatest disservice.

No one of us is perfect. Stan Lee, who taught Shooter and virtually every other writer of our generation how to do it, used to tell us that no villain is 100% bad and no hero is 100% good. The same is as true for human beings as it is for fictional characters. Maybe someday Shooter will recognize that truth and learn to accept it. He’ll be a better person for it.

There’s lots of other good stuff in Alter Ego #137. The conclusion of Alberto Becattini’s study of legendary comics creator Dan Barry is a balanced examination of the man. Michael T. Gilbert gives us a look at some of his earliest comics work...and he’s a much braver man than I am.

Bill Schelly reports on the fiftieth anniversary panel of survivors of the very first comicon. There are heartfelt remembrances of the late Herb Trimpe that will make you feel the loss of this wonderful comics artist and man all over again. There’s a fascinating article on the British magazines that reprinted Captain Marvel and other Fawcett comics in the 1940s through the 1960s...and an informative and lively letters column.

My problems with the Shooter interview aside, I can’t imagine not recommending any issue of Alter Ego to my readers. I think it’s the very best magazine on comics being published today. If you have an interest in comics history, you should give it a try.

Posted by Tony Isabella at 2:31 PM