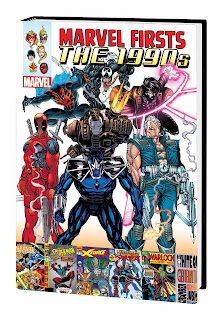 It was an impulse buy. I hadn’t purchased Marvel Firsts: The 1990s Omnibus [$125] because I hadn’t enjoyed many of the Marvel comics I had read during the 1990s. Even the solicitation for this giant,  1288-page hardcover refers to the 1990s as “comics' most divisive decade...”

But it was being offered on Amazon Marketplace for under $50 and I had an Amazon gift card burning a hole in my virtual pocket and I had all the other “Marvel Firsts” collections and...I am so very weak at times like that. I ordered it.

Though I immediately began weight lifting training after ordering the seven point three pound volume, I was still surprised by just how damn big it was when it arrived. It made my concrete-enforced mailbox sag. Oh, wait, not the mailbox. That was me as I carried it into my house and upstairs to my office.

Having thus established how mentally/physically puny your bloggy thing buddy is, I was now faced with the knowledge that I had spent fifty dollars on this volume and should read it. Albeit not all at once. I decided to read a story here and a story there...and then write about them in mini-bloggy things. This allows me to amortize the cost of the book over many bloggy things and write off the cost of the book as a business expense.

“Amortize” - a word I didn’t always know the real meaning of - is defined as: “to liquidate or extinguish (a mortgage, debt, or other obligation), especially by periodic payments to the creditor or to a sinking fund” and “to write off a cost of (an asset) gradually.” You would be surprised what an epic fail the line “Baby, I want to amortize you all night” turns out to be, even spoken in an utterly convincing Barry White voice. But I digress. 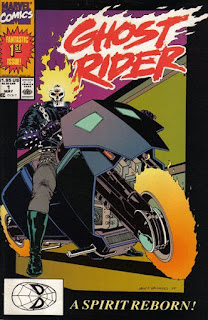 Ghost Rider #1 [May, 1990] was a relaunch of the successful 1980s title with new protagonist Danny Ketch taking the place of Johnny Blaze. The cover was penciled and inked by Javier Saltares, who was also the interior penciler.

Written by Howard Mackie and inked by Mark Texeira, “Life's Blood”  (46 pages) reeks of creative and editorial desperation. Everything rightly or wrongly considered “hot” at the start of the 1990s was shoved into this origin tale. Here’s a quick summary from the Grand Comics Database:

Dan and his sister go to visit Houdini's grave on Halloween Eve and run into a fight between Deathwatch's assassins and Kingpin's men; Barb is shot; Dan is hiding with his wounded sister when he finds a motorcycle with a glowing gas cap and transforms into Ghost Rider; A local gang ends up with the Kingpin's briefcase which Deathwatch was trying to steal.

Dan is a pathetic wuss, so not a lot of love for him from me. I’m fairly sure that later issues explained why he was chosen to be the new Ghost Rider, but, in this story, it seems like just plain dumb luck. I suspect that’s why this was a done-in-one-issue series for me. I need interesting characters in my comics.

Everything else is by the 1990s numbers. Chains on leather costume. Skeevy drug dealers. Ninja assassins. Generic villain Deathwatch, who could’ve been named Bloodwatch or Doomwatch or Spleenwatch or any of the other meaningless-but-tough-sounding names that became part and parcel of the decade. The Kingpin. This was a very long 46 pages to read through.

I was probably in the minority re: not liking the new Ghost Rider. Before long, he was a frequent guest-star in other Marvel titles. He was up there with the equally overused Wolverine and Punisher. However, after a while, according to comics retailers I know, his presence in other titles seemed to hurt sales. Indeed, this title took such a nosedive near the end of its run that it ended midway through what would have been its final story arc.

But, hey, I’m grateful to this Ketch kid. The success of his book led Marvel to launch Ghost Rider spin-off titles, including one in which my 1970s Ghost Rider stories were reprinted. I was paid more for the reprints that I was for writing those stories in the first place. Those checks were very useful at the time.

I’m well aware that every comic book is someone’s favorite. No one should feel disrespected because they liked this Ghost Rider more than I did. For some comics readers, the 1990s were as magical as the 1960s were for me. That’s as it should be.

I’ll be have more from Marvel Firsts: The 1990s over the next few months. I’ll also be back soon with other stuff.

Posted by Tony Isabella at 2:22 PM