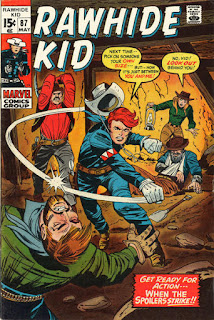 The Rawhide Kid is my favorite western comics character and one of my favorite comics characters period.  Something about the short of stature (but big on courage and fighting skills) Johnny Clay spoke to the short of stature (but big on comics-reading skills) teenage Tony Isabella.  After rereading the Kid’s earliest adventures when Marvel Comics reprinted them in a pair of Marvel Masterworks and an Essential Rawhide Kid volume, I wanted to reacquire every Rawhide Kid comic, reread them and write about them in this bloggy thing of mine. This is the 72th installment in that series.

The Rawhide Kid #87 [May 1971] is an all-new issue with a cover by writer-penciler Larry Lieber and inker John Tartaglione. If you’ve been reading my Rawhide Kid columns, you know I think Tartaglione was one of Lieber’s best and most compatible inkers. Tartaglione is also the inker of this issue’s story.

“When the Spoilers Strike” (19 pages) is the equivalent of a rare off day for Lieber. It’s a by the numbers tale that doesn’t really take full advantage of a somewhat unusual setting: a possible gold mine being worked by a old man and his pretty granddaughter.

Rawhide is just passing through when he is bushwhacked by Charlie and his never-named-in-the-story granddaughter. They think the Kid is a claim jumper, but give him the benefit of the doubt. He rides away and heads for a town just a couple miles away.

There’s no warrant out for me in this territory! So it’ll be safe for me to rest up here in town a few days before I push on!

Yep, once again, Rawhide is in a place where he’s not wanted by the law. Once again, he doesn’t even think about settling down in the place. The boy just ain’t right.

Charlie and Goldilocks - she’s a blonde - come into town to pick up some supplies. A couple of hooligans taunt Charlie and lay hands on his granddaughter. When Charlie fights back, they knock him around enough to break his arm.

Rawhide intervenes, taking both thugs down in five panels. Because Charlie won’t be able to work his mine for a couple weeks, the Kid offers to help out. Goldilocks likes the idea and accepts. That’s the closest thing to a romantic spark we see in the story.

They strike gold. Charlie goes to town to celebrate with the Kid. The oily Bret Claymoor decides to take the mine for himself. With several gunman in tow, the villain follows Charlie and the Kid back to the mine. Though they are spotted, they open fire on Rawhide and friends, forcing them to take cover in the mine.

Bret grabs some dynamite from Charlie’s and tosses it on the rocks above the mine. The explosion traps Rawhide, Charlie and Goldilocks inside the mine. Charlie is concerned:

We’ll never be able to dig our way free before we run out of air! We’re goners!

Rawhide isn’t about to call it quits. He searches every inch of the mine until he sees:

That water -- it ‘pears to be coming from under the wall! This may be our answer! I’m gonna try to break thru the wall!

Charlie pitches in. They break through to a cavern and follow the air to the entrance. Now it’s time to settle a score.

Charlie wants to ride with Rawhide, but the Kid says:

I do this kind of chore better on my lonesome!

Rawhide rides into the town and it’s time for a gunfight. He takes out two killers - one of them on a roof - by firing at them at the same time. A third killer wings him and gets dead for his trouble. Claymore jumps on his horse and rides.

Claymore realizes his horse isn’t as fast as Rawhide’s. He shoots at the Kid. Rawhide shoots back. It’s the last page of the story, so one bullet is all the Kid needs to kill the villain.

It’s all over! I’ll head back to the mine and tell Charlie that the score is settled! The claim jumpers are finished!

I’ll patch up my shoulder and mosey on...to another place...and another day.

Because God forbid the Rawhide Kid stay in a territory where he’s not a wanted man and where he probably stands a pretty good chance with the hot and soon-to-be-rich blonde. Oy vey!

The half-page “Mighty Marvel Checklist” appears following page six of the story. My pick of that long-ago month is Amazing Spider-Man #96, which brought back the Green Goblin and lead to the anti-drug stories that were so pivotal in changing the Comics Code to reflect the more modern sensibilities of the 1970s. Other listed titles included Fantastic Four #110, Thor #187, Avengers #87, Hulk #139, Captain America and the Falcon #137, Daredevil #75, Iron Man #37, Sub-Mariner #37, Amazing Adventures #6, Conan the Barbarian #5, Creatures on the Loose #11, Sgt. Fury #87, Where Monsters Dwell #9, Western Gunfighters #5, Where Creatures Roam #6, Kid Colt Outlaw #153, Fear #4, Two-Gun Kid #98, Ringo Kid #9 and My Love #11.

Last week, I was premature in announcing the demise of Marvelmania. This month, the organization was pitching its Marvelmania Official Stationery Kit consisting of a 40-sheet scratch pad, 10 envelopes and 10 letter size sheets featuring 10 super-heroes. The cost was $1.75 for the package and included a free club catalog.

The issue’s paid ads are for the usual comics dealers and a sample issue of The Comicollector fanzine. New is an offer for Snoopy and Red Baron cloth emblems for only a dollar each. They are said to be colorfully made and durable.

The Marvel Bullpen Bulletins page is back. The lead item announces Savage Tales #1, Marvel’s first R-rated publication. Other items: a documentary on Herb Trimpe, Stan Lee featured in a nationally televised interview on CBS, the launching of a new title starring Robert E. Howard’s King Kull. I remember being pretty excited about all of the above.

The “Stan Lee’s Soapbox” was another one I almost certainly rewrote a bit and used in Marvel’s British weeklies a few years later. It talks about Marvel mentioning real-life issues in its comics...and how whatever they wrote angered about half the readers. Which, as Stan saw things, was how it should be.

The “Ridin’ the Trail with Rawhide” letters page is also back this month. Reader Craig Ashley of Makanda, Illinois wanted to see new material in all the western reprint titles.

Melissa Nasser of Danville, Illinois wanted to see the Rawhide Kid go to Hawaii. I thought that was a great idea, but, sadly, it never  happened. Karen Henry of Henryetta, Oklahoma won a no prize for pointing out that the cover scene of a recent issue showed a somewhat different action scene than was in the story. Ask me that’s setting a pretty low bar for earning that most coveted of non-awards.

The best letter was from Rene Garcia of Tucson, Arizona:

I enjoy all the Westerns you guys put out. But I feel that you’re leaving out the bravest men in Western history. The Negroes of the Ninth and Tenth Cavalry, known as the “Buffalo Soldiers.” I further feel that Blacks played a far greater role in taming the West than the white man.

I am Mexican-American myself, and I’ve done a lot of research on the Negro Cavalry in the West. Someday, I’d like to see a mag about these brave men. Maybe you could call it TOP SOLDIER, or maybe have it feature one man and call it CAPTAIN BUFFALO, after a Negro who was the supreme fighting soldier. Thanks for reading my comments. 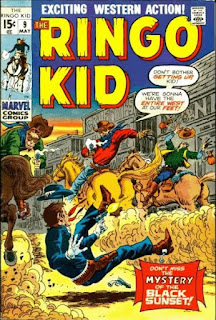 The final editorial material of the issue was the full-page “2 More Triumphs from Marvel” ad pitching The Ringo Kid #9 and Two-Gun Kid #98. Both had May 1971 cover dates.

The Ringo Kid #9 had a terrific new cover by Herb Trimpe. Inside, there are three Ringo Kid stories drawn by John Severin, originally published in The Ringo Kid Western #8 [October 1955]. Filling out the issue was “It Happened In Gunsmoke” (4 pages) by Stan Lee with art by Vic Carrabotta. This tale first appeared in The Outlaw Kid #11 [May 1956]. 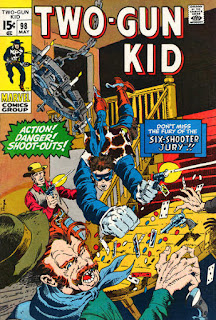 Two-Gun Kid #98 had another great new cover by Trimpe. Inside, the Two-Gun Kid stories were just a few years old. “Six-Shooter Jury” (9 pages) was written by Denny O’Neil and drawn by Ogden Whitney.  Whitney wrote and drew “Revenge Rides the Rails” (8 pages). These tales were from Two-Gun Kid #92 [March 1968]. As someone who’d been reading the title for several years, I recall being a little miffed. over these reprints. But I likely got a kick out of “The Man Who Wouldn't Fight” (5 pages) which came from The Outlaw Kid #5 [May 1955] and which featured art by John Romita.

Look for another Rawhide Kid Wednesday next week and some different bloggy thing stuff before then.