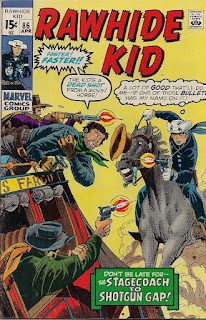 The Rawhide Kid is my favorite western comics character and one of my favorite comics characters period.  Something about the short of stature (but big on courage and fighting skills) Johnny Clay spoke to the short of stature (but big on comics-reading skills) teenage Tony Isabella.  After rereading the Kid’s earliest adventures when Marvel Comics reprinted them in a pair of Marvel Masterworks and an Essential Rawhide Kid volume, I wanted to reacquire every Rawhide Kid comic, reread them and write about them in this bloggy thing of mine. This is the 71th installment in that series.

The Rawhide Kid #85 [April 1971] was an all-reprint issue, save for the new cover by Herb Trimpe. Despite my love of Trimpe’s art, this cover didn’t and doesn’t work for me. It’s only now, 45 years after I first bought this issue, that I realize why it doesn’t work for me. From a visual standpoint, it’s extremely claustrophobic...and that feeling of unease is increased by the three dialogue balloons crowding the logo and the top part of the action. However, my main problem with the cover has nothing to do with the art.

This issue reprints the first three stories of the Rawhide Kid as recreated by Stan Lee and Jack Kirby in issue #17 [August 1960] of the title. Since the first of those stories tells how young Johnny Bart - he didn’t assume his real name of Johnny Clay until several years later - became the Rawhide Kid and the third explained how he became an outlaw, the issue reprints the origin of the character. How did that probably sales-boosting information not make it onto the cover? Sheesh!

Inside the issue, the three stories were printed out of sequence. “Beware! The Rawhide Kid!” (seven pages) is followed by the 5-page “When the Rawhide Kid Turned...Outlaw” The second story from issue #17 - “Stagecoach to Shotgun Gap” (six pages) - follows the outlaw story. Go figure.

I discussed these stories in my very first “Rawhide Kid Wednesday”  bloggy thing on February 1, 2012. If you click on that date, you’ll be whisked away to that column. 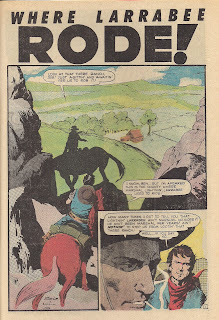 Following the three Rawhide Kid stories in the issue, we get “Where Larrabee Rode!” The four-page story was originally published in The Ringo Kid Western #13 [August, 1956]. It was written and signed by Stan Lee and drawn and signed by Al Williamson. However, as would have been usual for the era, Williamson likely got some help from artist friends. I think I see Angelo Torres in there, but I’m far from a comic art detective. Here’s a summary of the Larrabee tale...

From the hills overlooking a small ranch, two owlhoots are casing the place and planning to rob it. Jeb is nervous about this scheme and explains why:

This is the county where Marshal Lightnin’ Larrabee used to ride.

Ben, his partner and clearly the dominant member of their dastardly duo, is not worried:

How many times I got to tell you that Lightnin’ Larrabee ain’t marshal no more?! He ain’t been marshal fer years! Ain’t nothin’ to stop us from lootin’ that there ranch...

As the looters ride toward the ranch, the older couple who own the ranch spot them. Lucy doesn’t like the hard look of them. Martin, her husband, says she knows better than to judge a man by the way he looks. Sorry, Martin, but Lucy nailed this one.

The two outlaws push their way into the ranch house with their guns drawn. They want cash, which the couple says they don’t have. They talk about their itchy trigger fingers and scoff when Martin says there’s law and order in these parts.

Ben says the only lawman they were afraid of was Lightnin’ Larrabee and the marshal ain’t around any more. Then he repeats his demand for money. Martin reckons there’s a only one thing to do and, oh, heck, you know where this is going.

Martin jumps Ben and sends him to the floor with one punch. Then, grabbing Ben’s gun, he shoots the gun out of Jeb’s hand.

Martin tells Lucy to ride down the road and get the town’s current marshal. Jeb never saw an old man move so fast. Ben berates Jeb for letting an “old jasper” outdraw him. Martin gets the closing speech balloon of the story:

Tweren’t his fault, Ben! I could outdraw a dozen like yuh! You shoulda asked muh name afore yuh barged in! It’s Martin Larrabee. Some folks called me ‘Lightnin’” before I retired.

Marvelmania is now gone for good, so the other half of the page has the covers of the “now on sale” Fear #3 and Nick Fury, Agent of S.H.I.E.L.D. #18. Both issues are 52-page reprint issues priced at a quarter apiece. 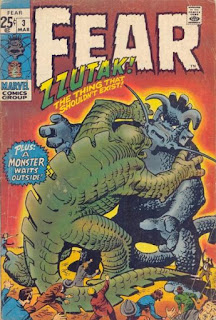 The cover of Fear is a reprint of the Jack Kirby/Steve Ditko cover of Strange Tales #88 [September 1961], featuring “Zzutak the Thing That Shouldn't Exist!!” The 13-page story was so exciting it had to have two exclamation points in its title.

The stories are written by Stan Lee and Larry Lieber. Sometimes, as with the short Ditko-drawn stories, Stan went solo. Other times, he plotted and Larry scripted. The artistic line-up for these stories is impressive: Kirby, Ditko, Paul Reinman, Joe Sinnott and, inking a Kirby-drawn monster tale, Dick Ayers. 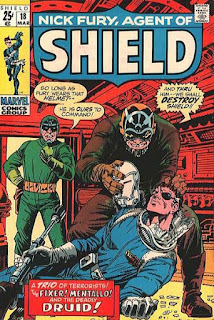 Nick Fury, Agent of S.H.I.E.L.D. #18 has a new cover drawn by Marie Severin and Herb Trimpe in some combination. It reprints the Fury stories from Strange Tales #142-144. The Grand Comics Database has Kirby plotting most of the stories and doing pencils or layouts for them as well. Lee does all of the dialogue. Howard Purcell finishes the pencils on two stories and Mike Esposito does all the inking on them. This is the last issue of the title, ends on a cliffhanger, and, when S.H.I.E.L.D. reprints resumed a few years later, Marvel inadvertently skipped the conclusion of the serial.

Nothing new with the paid ads this issue. Just the same ad from the Monster Fan Club offering an “absolutely free, giant, life-size MOON MONSTER” poster and the same mail order comics dealers who had been advertising for months. Gone is the ad offering information on how “you can learn to draw comics at home from experts” and “earn big money.”

Also missing this time around: both the “Marvel Bullpen Bulletins” page and the letters page. However, by virtue of some rearrangement of panels on the last page of “Stagecoach to Shotgun Gap,” Marvel  includes the annual and, at the size it’s printed here, extremely hard to read “Statement of Ownership, Management and Circulation.” The average paid circulation of Rawhide Kid was 207,498 per issue. Sigh. Those were the days, my friends.

That’s all for this week’s edition of Rawhide Kid Wednesday. I’ll have another Rawhide Wednesday for you next week, but I’ll be back even sooner with other stuff.

Posted by Tony Isabella at 7:36 AM