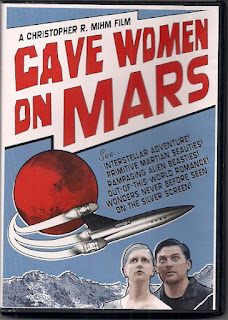 Cave Women on Mars (2008) is one of an entire series of movies by Christopher R. Mihm in which the director/writer emulates the low-budget science fiction and horror movies of the 1950s. I was kind of sort of aware of Mihm, but never actually watched one of these films until a bloggy thing reader sent me this one. Wretch than I am, I cannot find or recall the name of that generous individual. If he contacts me again, I will tell him personally what I tell all of you today. I owe him for 73 minutes of big gooey nostalgia with a heaping side order of chuckles and guffaws.

The movie is set in the far future of...1987! Mars-1 is mankind’s first visit to Mars. The spacecraft is commanded by Captain Jackson (Josh Craig). The other crew member is Lieutenant Elliott (Daniel Sjerven). On landing, they find Mars is so Earth-like they can do without breathing devices. They split up to cover more ground.

Elliot makes an even more astounding discovery. The area of Mars in which they have landed is ruled by two warring matriarchal warrior societies. The dark-headed women treat their captive men as slaves. The blondes treat their men like children. Elliot is unlike any man they have ever seen.

The copy on the front of the DVD case nails the excessive hype of the 1950s. It proclaims the viewer will see...

The reality? Not so much. But if you’re expecting me to rag on this movie, you’re going to be disappointed. I loved it.

Yes, the dialogue made me grit my teeth in pain a few times. Yes, the acting was somewhat less than Oscar-worthy. Yes, the beastie - there was only one - looked like a man wearing a particularly worn rug. Yes, the other “special” effects were comical in their utter lack of impressiveness. I don’t care about any of that.

Mihm is clearly my brother from another mother. If you had told me Cave Women on Mars was an actual low-budget flick from the 1950s, perhaps one that only played in the theaters of backwater villages in which indoor plumbing was a luxury, I would have believed you. If you had told me this was the lowest budget film imaginable, I’d have bought that as well. I don’t care about that.

What I care about is that Cave Women on Mars is a film I could have seen being hosted by Ghoulardi on Cleveland TV when I was not quite a teenager. Mihm watched these kinds of films with his late father and that’s the ambiance he seeks and finds in his own productions. I feel like he’s opened a doorway to a part of my childhood that I never knew existed before this.

Do not mistake the above for my telling you Cave Woman on Mars is so bad it’s good. That’s not what I’m saying.

What I’m saying is that this is a fine little film that brought me pleasure. It wrapped me in its low-budget cinematic arms and made me feel good. If you have seen Cave Women on Mars and have snark to share, save it for someone else.  I love this movie with absolutely no reservations...

...and it will not be the last Mihm film I watch.

For more on Mihm and his movies, visit his official website. I’ll be back soon with more stuff.

Posted by Tony Isabella at 4:27 PM