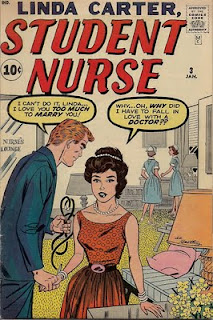 Linda Carter, Student Nurse ran for nine issues between September
1961 and January 1963.  Published by Marvel Comics, it was written
by editor Stan Lee and drawn by Al Hartley.  My search through my
VAOS (Vast Accumulation of Stuff) recently turned up a copy of the
young lady’s third issue, dated January 1962.

There is another - or maybe the same - Linda Carter who starred in
four issues of a 1970s title called Night Nurse and who currently
appears in Marvel Universe continuity as an underground doctor to
super-heroes.  And, if you’ll excuse me while I slap my forehead,
it just hit me Lynda Carter (just one letter off) was the wonderful
actress who played Wonder Woman in the fondly-remembered TV series
based on the DC Comics character.  As this never occurred to me in
the 1970s, I can’t even blame my advanced years on my memory lapse.
However, neither Night Nurse or Wonder Woman interest me at this
particular moment.  I’d much rather write about an odd little comic
book that fascinates me today.

In both art and writing, the original Linda Carter, Student Nurse
is a cross between teen humor comics like Patsy Walker and Archie,
and the career-oriented romance comics published by Charlton Comics
in the 1960s and later.

Like most teen humor comics, you have your doppelgangers of Reggie
and Veronica from Archie.  Linda’s “Reggie” is young doctor Jackson
J. Jangle and her “Veronica” is fellow student nurse Gwen Glitter.
Both scheme to separate Linda from her romantic interest, another
young doctor named Steve Stuart.  Yet while the romantic rivalries
are similar to other humor comics of the era, this issue’s stories
all have a harder edge to them.  In this issue...

When a doctor suffers a nervous breakdown, his wife’s laments have
Linda reconsidering her romance with Steve.

An abundance of patients has the hospital shorthanded.  The nurses
are asked to work double shifts without additional pay until money
can be raised to hire additional nurses.

At a party, a loudmouthed boor calls the doctors and nurses “dull”
and “nobodies”...until his own life is in jeopardy.

A filthy rich socialite tries to bully the hospital’s staff to get
priority treatment for her son, there to have his tonsils removed.

Every one of these stories is a mere five pages in length, yet they
deliver drama, humor and satisfying endings without seeming crowded
or rushed.  If the other issues of Linda Carter are as good as this
one, I would be downright eager to have a hardcover collection of
the entire series.

This issue also contains three paper doll pages of Linda, Gwen, and
JJJ.  The last stands for “Jackson J. Jangle” and not - shudder -
J. Jonah Jameson.  There’s also a two-page text story, but, since
I never read those as a kid, I see no good reason to start reading
them now.

Even this Linda Carter is part of the Marvel Universe.  Millie the
Model guest stars in the final issue of the series and Linda made
an appearance in Patsy Walker #99 [February 1962], a classic comic
book which also featured Nikita Khrushchev.

Keep watching for another journey into the deepest corridors
of my VAOS.  Indiana Jones ain’t got nothin’ on me!

After this article ran in CBG, I received this informative e-mail
from reader Tim Markin.  He wrote:

"I especially enjoyed the article on Atlas's Linda Carter comic, as
I've owned three of the nine issues for many years, and nobody ever
acknowledges it. I was fascinated to learn Linda could possibly be
the current Night Nurse. Didn't former Cleveland resident Brian
Michael Bendis reintroduce her into the Marvel Universe during his
run on Daredevil?

"The use of the initials “JJJ” is very funny, given Stan used them
again in Spidey. I'm also surprised Stan also used the name “Gwen”
years before the name was used in Spider-Man. I always thought the
name had been Steve Ditko’s contribution because studio mate Eric
Stanton had used the name in “Sweeter Gwen,” one of his bondage
comics.

"One bit of trivia that would have been cool to include was that
Linda Carter, Student Nurse was likely canceled to make room on the
schedule for Amazing Spider-Man. I'm sure you know about Marvel's
16 bi-monthly titles restriction (eight titles per month), so the
bi-monthly Carter book's ninth issue, dated January 1963, made way
for Amazing Spider-Man #1 dated March 1963. Only speculation, but
the most likely scenario. We know the low-selling Incredible Hulk
ended with #6 (March 1963) to make room for Sgt Fury #1 in May of
that year.

"And look at the strange case of Amazing Adult Fantasy. It was a
monthly with #14 dated July 1962. It became Amazing Fantasy with
#15, COVER dated August 1962. However, the indicia of the issue
states SEPTEMBER 1962, so it secretly became  a BI-monthly. Then it
was canceled to make room for the relaunch of the BI-monthly Two-
Gyn Kid...with issue #60  cover dated November 1962). Very sneaky.
But I digress.

"I would be curious to know what final issue was dated July, 1961 to
make room for Linda Carter #1. Why isn't there a complete list of
Atlas/Marvel's output from 1957 to 1968 during the company's eight
title-a-month period? It would be neat to see what was getting
canceled to make room for what new title.

"Thanks for listening to my rambling missive."

Thanks for writing, Tim.  As your best bet for a time line of DC,
Marvel and select other publishers, I recommend “The Newsstand” at
Mike’s Amazing World of DC Comics.