TONY'S BACK PAGES: GODZILLA AND ME 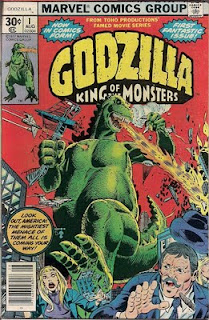 I love Godzilla.  I’ve loved that big lizard since the first time
Cleveland monster movie host Ghoulardi (Ernie Anderson) brought him
into my boyhood home via grainy black-and-white TV.  I loved giant
monsters in general, but Godzilla was something special.  It didn’t
matter if some of the first series of Godzilla movies were kind of
sort of awful.  It didn’t matter than tracking down the later and
much better ones was often difficult.  I watched them all and, when
my kids were around, they watched them, too.

If I thought for a moment that Toho Studios would let me get away
with it, I would launch the First Church of Godzilla.  Because my
scaly lord and master protects us all with his fiery atomic love.
Sure, it can sometimes be a tough love, but, more often than not,
we’re asking for it.  Alas, unlike L. Ron Hubbard, I will never get
rich by starting my own religion...even though mine makes a heck of
a lot more sense than his.

Godzilla and I almost crossed paths back in the 1970s.  Even before
Roy Thomas hired me to work at Marvel Comics, I had pitched him on
doing Godzilla comic books.  Roy thought the idea had merit and, by
the time I was on staff at Marvel Comics in late 1972, the company
was negotiating with Toho Studios with an eye towards launching a
black-and-white Godzilla magazine to go along with Dracula Lives,
Monsters Unleashed, and Savage Tales.

Had the Godzilla magazine come about, I would have been its writer.
What few notes I can find from that period indicate I was planning
to start our new stories shortly after the events of the very first
Godzilla movie, the one which ended with Big G being disintegrated
by the Oxygen Destroyer.

What looked like disintegration was actually teleportation by some
friendly aliens who knew Godzilla would be needed by Earth in the
near future.  Our planet would be facing some major intergalactic
threats and Godzilla would be our first and best line of defense.
The under-negotiation contract permitting, I would add other Toho
monsters (Mothra, Rodan, Ghidorah) as our comics series progressed.
As you can imagine, I was a happy Bullpen Buddy!

I remember two more things about this project.  Dave Cockrum wanted
in on it in some way; I would’ve been delighted to have worked with
him.  Also, legendary comics fan, fanzine publisher, and sometimes
DC staffer Mark Hanerfeld was equally excited about the project and
offered me ideas and suggestions whenever our paths crossed.  Mark
was a really good guy.  He passed away a while ago, but I remember
him fondly.

Alas, the Godzilla magazine fell through.  There was some call from
the agent who was negotiating with Toho Studios to the effect that
he had lost face with Toho.  I never did find out what that was all
about and likely never will.

A few years later, Marvel did successfully get comic-book rights to
Godzilla.  I had left the company and moved over to DC by then, so
Doug Moench got to write the series.  He did a pretty good job with
it, which I know because I’m currently rereading the series for the
first time in a couple decades.