TONY'S BACK PAGES: GODZILLA IN THE MARVEL UNIVERSE 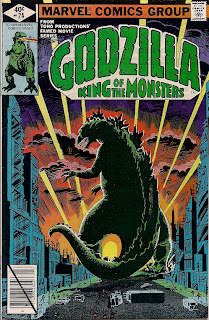 In yesterday’s bloggy thing, I wrote of my love of Godzilla and how
I came maddeningly close to writing Godzilla comics for Marvel.
Tragically, Marvel wasn’t able to come to terms with Toho Studios
during my time with the company.

It was the summer of 1977 before Marvel, having finally reached an
agreement with Toho, began publishing what would be a two-year run
of Godzilla adventures.  Writer Doug Moench and artist Herb Trimpe
faced challenges I had, in my naivete, never considered when I was
making my own Godzilla plans.

The cinema Godzilla of the late 1970s was a big-eyed cuddly toy in
comparison to the nightmare figure that had thrilled audiences in
1954 and 1955.  His last appearance had been in 1975's Terror of
Mechagodzilla and he would not receive a much needed makeover until
1984's The Return of Godzilla, better known to American audiences
as Godzilla 1985.

The late ‘70s Godzilla would have looked silly in the comic book.
Instead, Marvel went with a more generic Tyrannosaurus Rex for its
basic model, adding the signature row of back fins.  It was a good
workable model, but, even in the hands of Trimpe, who did a great
job handling the storytelling demands of a giant protagonist, this
Godzilla lacked the personality of the original and the cinematic
versions to come.

Moench and Trimpe sent Godzilla on a two-year trip across the USA,
though they skipped over most of the Midwest.  Unable to use any of
Godzilla’s friends and foes from the movies, they had to create an
army of other opponents for the Big G.  I can’t say many of these
monsters impressed me.  I would have preferred to see Moench go to
the Marvel monster comics of the early 1960s; those giant beasties
would have been more worthy opponents for Godzilla.

Godzilla was placed firmly in the Marvel Universe from the get-go.
SHIELD - along with agents Dum-Dum Dugan, Gabe Jones, and Jimmy Woo
- were regular cast members.  There were guest appearances by the
Champions, the Fantastic Four, the Avengers, and even cameo spots
for J. Jonah Jameson and Spider-Man.  Not to mention a wacky-but-
wonderful team-up with Devil Dinosaur and Moon Boy.

Borrowing from other Japanese movies and cartoons, Moench added an
elderly Japanese scientist, his beautiful assistant, and his scary
smart grandson.  The grandson was more concerned for the safety of
Godzilla than his own and, for several issues, hijacked Red Ronin,
a giant robot created to battle Godzilla.

These Godzilla comics aren’t classics, but they were a creditable
take on my favorite giant lizard.  Three decades later, they remain
great fun.  Marvel reprinted the entire 24-issue run in their 2006
black-and-white Essential Godzilla [$19.99; ISBN 978-0785121534].
Near-mint copies of the original color comics have gotten pricey in
recent years, but you can still find lesser condition copies for a
couple bucks each. They are well worth the search.