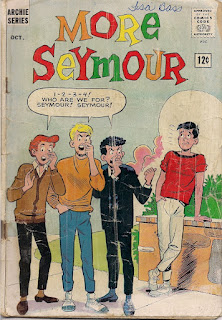 Not very long ago, I wrote about Seymour, My Son #1 [Archie Comics;
September 1963] and made a solemn vow that, someday, a copy of the
sequel to that unusual comic book would be mine.  Thanks to reader
Walter Price, my someday has come.  The peerlessly generous Price
sent me a well-read copy of More Seymour #1 [October, 1963]. Talk
about nigh-instant gratification.

Like its predecessor, More Seymour is written by Frank Doyle with
art by Dan DeCarlo (pencils) and Rudy Lapick (inks).  The cover is
also by DeCarlo/Lapick and my thanks to Bongo Comics legend Bill
Morrison for correcting the erroneous cover credits I got from the
Grand Comics Database.

Though More Seymour is a more traditional teen humor comic than the
first one-shot, it still breaks a few of the “rules.”  The 30-page
story is split into two chapters.  The first is told from the point
of view of Seymour’s loving father and focuses on his exasperation
as his son turns every household chore into a disaster.  This kid
could give Archie lessons in klutziness.

The second chapter portrays Seymour’s equally disastrous day at the
beach.  Freed from his chores by his father, the lad anticipates a
fun time will be had by all.  Sadly, it doesn’t turn out that way.
Seymour can and does out-Archie Archie!

Doyle brings the funny to the story and DeCarlo choreographs with
his trademark skill and grace.  Each of them was great when working
with other collaborators, but, whenever they worked together, they
created hilarious storytelling magic.

Despite being half-a-century old, Seymour, My Son and More Seymour
hold up very well.  As a father myself, I find the obvious love of
this harried dad for his goofball son heartwarming.  Two classics
and, according to one of my friends at Archie Comics, they will be
reprinted later this year, most likely in a couple Archie digests.
I hope you get to read them.