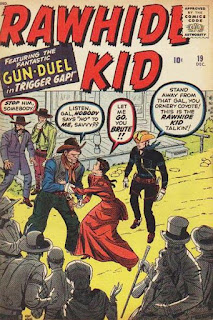 The Rawhide Kid is one of my favorite comics characters.  Inspired
by Essential Rawhide Kid Vol. 1, which reprints Rawhide Kid #17-35,
I plan to write about the Kid every other Wednesday.

“A man on the run is like a haunted beast! He runs, he hides, he
fights, but with each passing minute he knows that sooner or later
someone, somewhere will recognize him, will shout the warning, will
cause his undoing!  So it was with the Rawhide Kid!”

There are plot elements that appear frequently in the Rawhide Kid’s
adventures and even in the five-page non-series tales that also ran
in these issues.  Each of the three stories in The Rawhide Kid #19
[December 1960] has at least one of those elements.

Because of his diminutive stature, the Kid was seen to be an easy
target for the many bullies found in Marvel’s westerns.  In the 13-
page “Gun Duel In Trigger Gap!” by Stan Lee, Jack Kirby, and inker
Dick Ayers, a weary Kid feigns timidity to avoid a saloon shoot-out
with the brutish Bill Corbett.  But when Corbett tries to force his
unwanted attentions on pretty Nancy Clark, the Kid gives the lout
a two-fisted beatdown.  Within days, Nancy and the Kid have fallen
in love.

Violent events rapidly put an end to the romance.  Nancy’s dad is
the town sheriff and he recognizes the Kid...and the dreaded Garson
Gang is coming to town to rob a gold shipment.  The sheriff takes
a shot at the Kid and the Garson Gang takes Nancy prisoner.  The
Kid rescues her, but then pretends he was after the same shipment.
He flees, leaving Nancy behind in tears.

The sheriff pursues the Kid, but Rawhide gets the drop on him.  Our
misunderstood hero then returns the gold to the lawman, asking him
to tell his daughter Nancy that, though the sheriff recovered the
gold, the Kid escaped.  Rawhide knows Nancy could never have a good
life with an outlaw.  As the sheriff watches the lonely young man
ride off, he realizes what kind of man Rawhide really is...and how
much the Kid loved his daughter.  In future issues, we’ll see more
bullies and more of the Kid pretending to be a badman to spare the
feelings of others.

“The Rip-Snorter” is a five-page non-series story by Lee and artist
Paul Reinman.  The first panel introduces us to two 18-year-olds.
Joe is the “rip-snorter” of the title.  He doesn’t like anyone to
tell him what he can do and, within a few panels, we see that his
hard-riding, hard-fighting lifestyle has put him on the wrong side
of the law.  His friend Chris is quiet and thoughtful.  He becomes
a frontier scout and then an “Injun agent.”

When the paths of the former friends cross, Joe expects to have no
trouble dispatching Chris.  Chris easily out-draws Joe and arrests
him.  Then we get the last-panel surprise and it’s another “theme”
we’ve seen before and will see again.

Chris is actually Kit Carson, “one of the most famous names in the
West.”  Yep, it’s another one of those stories in which a character
turns out to be a western legend.  Stan must’ve loved this gimmick
because he used it again and again.  However, one thing he didn’t
seem to love was researching the historical figures.

Carson wasn’t exactly the “white hat” hero depicted in this tale.
To quote from Wikipedia:

Carson was a courier and scout during the Mexican-American war from
1846 to 1848, celebrated for his rescue mission after the Battle of
San Pasqual and his coast-to-coast journey from California to
deliver news of the war to the U.S. government in Washington, D.C..
In the 1850s, he was the Agent to the Ute and Jicarilla Apaches. In
the Civil War he led a regiment of mostly Hispanic volunteers at
the Battle of Valverde in 1862. He led armies to pacify the Navajo,
Mescalero Apache, and the Kiowa and Comanche Indians. He is
vilified for his conquest of the Navajo and their forced transfer
to Bosque Redondo where many of them died. Breveted a general, he
is probably the only American to reach such a high military rank
without being able to read or write, although he could sign his
name.

The comic books of the 1960s didn’t often show such shades of gray
in depicting heroes or villains.  The hero of several dime novels,
Carson was a man of his times.  Unfortunately, those times saw all
manner of atrocities committed against Native Americans and Carson
was an active participant in some of those atrocities.

Lee, Kirby, and Ayers return for “Fight or Crawl, Kid!”  The five-
page story starts with gunslinger Crow Mallon calling the Kid out
in, yes, another saloon.  Mallon wants to make his rep by beating
the Kid in a gunfight and tries to intimate Rawhide with some keen
shooting.  In a scenario that will be repeated in other tales, the
Kid exhibits gun skills so far beyond Mallon’s that Crow virtually
takes flight as he rides out of town.

“Well, he wanted a rep, and I reckon he’ll get it after all...Crow
Mallon, the loudest-mouthed four-flushin’ bully in these parts!
Just like all blusterin’ bullies, their nerve turns to water when
they pick on the wrong hombre!”