SEDUCTION OF THE INNOCENT 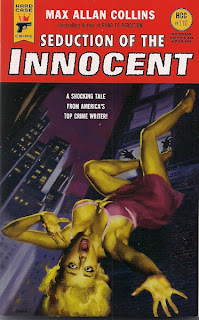 ﻿Seduction of the Innocent by Max Allan Collins [Hard Case; $9.95]
is the third and - for now - final book in his Jack & Maggie Starr
series.  Maggie is the president of the Starr Newspaper Syndication
Company, having inherited 75% of the company from her late husband
- the Major - who, besides syndicating comic strips and features to
newspapers around the world - was instrumental in the birthing of
the American comic book industry.  She’s a former burlesque queen
and still so beautiful she can turn heads clear around.  But she’s
also a sharp businessperson.

Jack is the Major’s son from a previous marriage.  He’s the vice-
president of the company and its special investigator, skilled at
getting the company’s artists and writers out of tough jams.  His
father only left him 25% of the company because Jack was more than
a little wild in his youth and adulthood.  He’s a handsome, smart,
tough guy with a love for the comics and women, not necessarily in
that order.

A Killing in Comics (2007) was a fictionalized murder mystery based
on the Superman ownership dispute. Strip for Murder (2008) had its
origins in the Al Capp/Ham Fisher feud.  Both of these books were
great fun and made even more so by their Terry Beatty illustrations.
I recommend them highly.

Seduction of the Innocent, as you probably guessed from the title,
is based on the war against comics launched by Dr. Fredric Wertham
and others.  In this book, Wertham is murdered by a method found in
one of the very comic books he’s attacked.  But who did the deed?
There is no shortage of suspects, including fictional versions of
EC Comics publisher Bill Gaines, crime comics legends Charles Biro
and Bob Wood and rival anti-comics crusader Gershon Legman, just to
name a few.  With his usual skill - incredible skill it would be if
he were a lesser writer - Collins weaves a terrific tale of crime
and passion. It’s the kind of book that keeps me turning the pages
until I get to the big payoff and, in this case, it’s a satisfying
ending to the dire doings.

With a cool Glen Orbik cover painting and those great illustrations
by Terry Beatty, Seduction of the Innocent has but one major flaw.
It might be the last book in the Jack and Maggie Starr series...and
that would be a crime in itself.

Come on, Al, don’t end it here.  What about those high crimes and
misdemeanors that were always part of magazine distribution?  Could
it have been something more serious than bad judgment and luck that
reduced Martin Goodman’s comic-book fortunes? Did any of the folks
who lost their jobs in the Atlas Implosion turn to crime when they
couldn’t get comic-book work anymore? What was really behind Jack
Kirby’s being blacklisted at DC after his fall-out with one of the
editors over a newspaper strip?  What if the mob had taken a more
characteristic management approach when it bought DC Comics? What
happened to the writers who tried to get medical benefits from DC?
Were mob strikebreakers involved? What if a disgruntled artist had
thrown an editor out a window...or simply been framed for the act
after threatening the editor?  You know the comic-book legends as
well as I do.  There must have been some stone killers among them.
Just...write...more...Jack & Maggie Starr...novels.  I’m asking you
nice.  This time.  After all, I do have some Sicilian blood mixed
with my otherwise pure Italian lineage and, remember, I’ve already
killed you once.

Seduction of the Innocent - and the other Jack and Maggie Starr
novels - are must-reads for fans of comics history and hard-boiled
murder mysteries.  You should buy them.  Now.

Edited and designed by Craig Yoe, Comics About Cartoonists: Stories
About the World’s Oddest Profession [IDW; $39.99] collects over 200
pages of comics featuring cartoonists as heroes, villains, madmen
and comics foils.  Among the reprinted works are stories by comics
legends like Jack Kirby, Steve Ditko, Harvey Kurtzman, Will Eisner,
and many more.  Yoe must really like Eisner as the Spirit creator’s
name appears twice in the cover roll call.  I kid because anyone’s
who’s ever put together a book will certainly sympathize with the
error that gets overlooked and which you then spot as soon as your
copies of the book arrive.

The stories are a mixed bag, but there are gems here, including a
number of which I had never preciously heard.  If I had to choose
my favorites, they would be:

This book delivered much amusement and entertainment and, since it
barely scratches the surface of comic-book stories with this self-
reflecting theme, I’m hoping it sells well enough for IDW and Yoe
to consider a sequel.

I love cheesy monster movies.  I love cheesy giant monster movies
best of all, but I can downsize my affection to include beasts of
lesser stature as well.  These movies take me back to my Cleveland
youth and the grainy movies hosted by Ernie “Ghoulardi” Anderson on
Channel 8.  The cheese remains strong within me.

My latest venture into cheese was Dino Wolf, aka Dire Wolf, a 2009
film by Fred Olen Ray who has directed, produced and written many
science fiction and horror movies and a great many movies with the
word “bikini” in their titles.  He’s best and maybe only known for
low-budget movies and this movie clearly falls into that category.

The basic plot of this movie is not blindingly original.  There’s
a government program to develop a super-soldier of sorts and, for
some silly reason, breeding a prehistoric wolf and human hybrid is
their method of choice.  Mind you, they don’t expect the creature
to be able to survive outside its man-size unguarded cooler, but,
hey, what’s the worst that could happen?

While the monster’s body count rose and the uncensored director’s
cut showed me lots of bloody entrails and such, I noticed that the
acting and writing weren’t all bad for a cheesy monster movie.  The
first two victims - a lab assistant and a security guard - were on
screen long enough for me to like them.  That was the case with a
number of other characters as well.  One character’s - and here is
a SPOILER WARNING - suffered from Obsessive Compulsion
Disorder and that played a role in his demise.

The only actors you might recognize are Maxwell Caulfield and Gil
Gerard.  Caulfield, doomed to forever seek redemption for Grease 2,
carries his role as town sheriff well.  Gerard, playing your basic
immoral military-type, doesn’t carry his role well.  Which I think
is a shame because he’s a better actor than this.

I neither recommend or caution against seeing Dino Wolf.  It ain’t
a bad way for a cheesy monster movie fan like me to kill a couple
hours.  Besides, I got it through the library, so it didn’t cost me
a dime to watch it.  I’m good with it.

Sitting on my cheese tray waiting to be watched are Attack of the
Octopus People, Monster from Bikini Beach and Snow Shark.
Believe it or not, this is not a cry for help.  I expect to have fun with
all three of those movies.  One way or another.