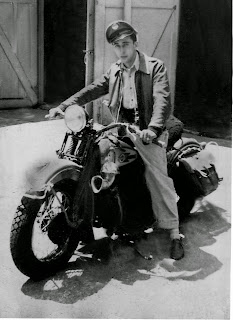 This is my favorite photo of my dad. He bought the motorcycle when he returned from his World War II service in the Army Air Corps. My grandmother hated it. His not-yet-wife and my mother wouldn’t ride on it. So he didn’t keep it long. But I think the picture shows an adventurous nature Dad would suppress as he accepted his roles as husband, father and the guy who kept the Isabella Brothers Bakery going for decades.

As you can tell from the photo, Dad could rock a hat. It was one of his many gifts, but, alas, one I did not inherit. I’m content with having inherited the Isabella Charm, which made him beloved of just about everyone who crossed his path from his family to his bakery customers to the people who cared for him in hospitals and hospice.

Louis A. Isabella passed peaceful in the very wee hours of Tuesday, October 14. He was 89 years old. He was married to my mother for 65 years. With her, he raised five kids while working for the bakery for half a century or so. The past couple of years were very rough on him while he struggled with various ailments.

Today’s blog will not be a recounting of his struggles. When I knew Dad wouldn’t be with us much longer, I knew I would write about him here. I also knew that, instead of mourning his life, I would try to celebrate his life and his role in my life. I mean no disrespect to my siblings, but this blog is between me and Dad.

I visited Dad as often as I could at various hospitals and nursing homes. We talked about stuff. We didn’t agree on a lot of it, but there was mutual respect. I was proud of him. He was proud of me. We didn’t leave anything unsaid before he was unable to communicate and that was a blessing to me. I knew we were good and that made his passing a bit easier for me to handle.

Dad got me better than the other members of my family. He was very supportive of my desire to be a writer. When I was in my teens, he partitioned off a portion of our basement to create an “office” for me and give me the privacy I needed to write. When I would move to New York to work for Marvel Comics, he rented a truck and brought my comic books and other stuff to my Brooklyn apartment.

I brought him to the Marvel offices and introduced him around. He met Stan Lee and they liked each other. That was a special moment for me, being in the same room with the two men who had shaped my life more than any other people in that life.

When I visited Dad in the hospital and rehab center, before he went into hospice, he was usually in good spirits. When he wasn’t, he’d sometimes talk about mistakes he had made in his life. I don’t know if he believed me, but I said most of what he considered mistakes were simply him doing what he had always done throughout his life.More times than I can count or want to recount here, Dad sacrificed his own ambitions and wants to help his children, other members of his family, friends and neighbors. He was a good guy and, in many ways, he taught me what it takes to be a good guy.

I have a great many stories I could tell you about Dad, his life, his final years and more. I’ll share those stories in the fullness of time. But I have to tell you about one special day I shared with Dad and my son Eddie because it will help me explain my father and the kind of man he was.

Dad served in the Army Air Corps during World War II and he loved planes. My son Eddie fell in love with planes around the time that he saw Top Gun on TV. So, when an opportunity arose for me to tour a National Guard airbase, I invited them to join me.

I was being considered for a writing gig for the Air Force. The guy who thought I would be perfect for the project arranged for me and Dad and Eddie to get a tour of that base. The project fell through, but the day was more rewarding than any paycheck could have been.

Eddie was in the third grade. I got permission to take him out of school for the day. Dad, retired since his bakery closed, drove to my house in Medina. We drove to the base in my van.

For me, watching Dad and Eddie on that tour was more fun than the tour itself. I couldn’t tell you which of them had the widest eyes as they got to explore big cargo planes and check out other areas of the base. To this day, I can picture their smiling faces. It’s a memory I hold dear and which comforts me whenever I start missing Dad. Which I do every day.

Sitting with Dad in hospice, during times when I couldn’t be sure if he could hear me, I figured out what that day revealed about him. I shared the revelation with a few others and they all understood what I was saying, even those who hadn’t known my father except at the end of his life.

Dad wanted to fly. He always wanted to fly. What kept him tied to the ground was his commitment to his family, his ongoing sacrifices to our needs. Dad couldn’t fly, but he wanted to make sure his kids could. That’s who Dad was.

Dad got me better than any other member of my family. He knew how much my writing meant to me. Even when he didn’t read the things I wrote, he took joy from seeing my name in the credits. I think he understood that writing was my flying. I hope he realized it was him who gave me my wings.