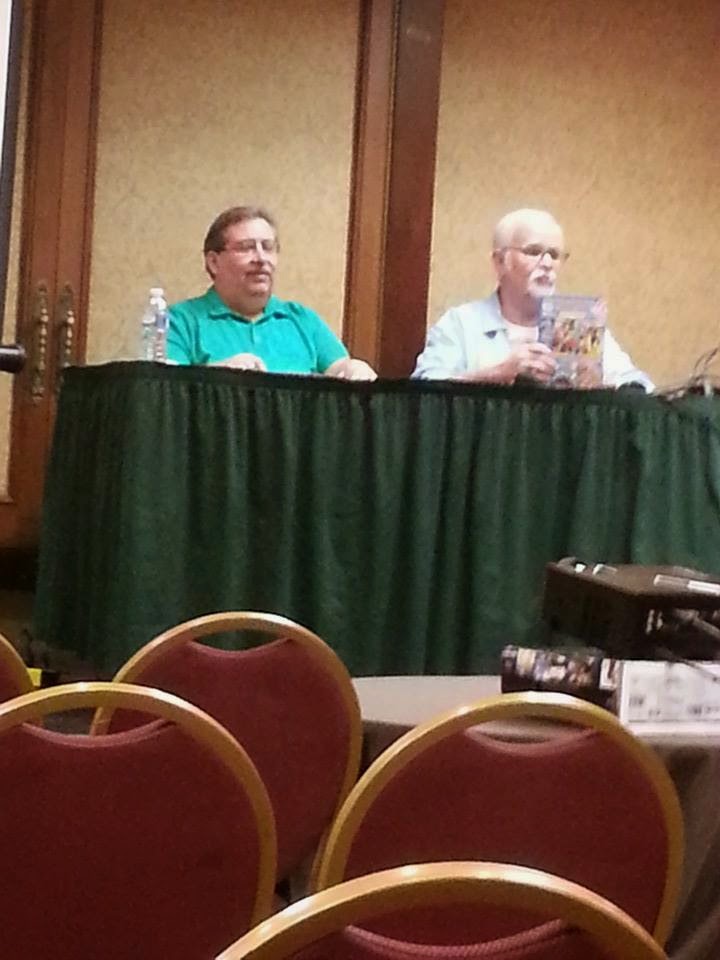 I was a guest at three conventions in as many weekends, which puts me three weeks behind in reporting to you on Cleveland Comic Con.The event was on Sunday, October 26 at the Doubletree Cleveland in Independence, Ohio.

Cleveland Comic Con is a newer show. It’s put on by a group of fans from Ohio, Pennsylvania, Kentucky and North Carolina who love just about every kind of fandom there is: comic books, gaming, anime, cosplay and more. The promoters and volunteers clearly worked hard to deliver a quality convention experience. They hope their single-day show will eventually grow into a multiple-day event. I can see some obstacles ahead of them, but I’ll save my suggestions for the end of today’s bloggy thing.

I had two reasons for contacting the show about my appearing as a guest: Paul Kupperberg and Linda Lessmann Reinhold. Paul and I go back to before I moved to New York to work for Marvel Comics, back when he was publishing The Comics Reader with his boyhood pal Paul Levitz and I was writing for TCR and virtually every other fanzine that would have me. After an amazing run writing Life with Archie, Paul is writing for The Charlton Arrow, an ongoing tribute to the legendary comics company where so many comics creators made their first appearances. I bought the first two issues of the title from Paul and plan on reading/reviewing them in an upcoming edition of this bloggy thing of mine.

Linda started work at Marvel Comics a few weeks before I did. Like most of the younger guys that worked there, I had a crush on the talented colorist who was both gorgeous and sweet as could be.We’ve run into each other at conventions in the past, but this was a first reunion in way too many years.

I’m a firm believer in the notion that conventions are whatever you make of them. I asked the convention to put my table next to Paul’s table and the table shared by Linda and husband Bill, who is a very lucky man, a nice guy and a terrific artist.

How could I not have a great time at the convention with such good people around me? Linda was a guest on my “Tony’s Tips Live” presentation while Paul and I did a panel on “Making Independent Comics” that strayed off the subject and pretty much came down to a wonderfully snarky chat between two grizzled veterans of the comics industry.

After the show, Paul, Linda, Bill and I had dinner at the Winking Lizard, a swell bar-and-restaurant near the hotel. During the day, we talked about our lives, our kids, our careers, friends we knew back in the day, politics and everything else old friends will talk about when they get together for the first time in too long a time.The day was all I could have hoped for. I hope I get to see my dear friends again sooner rather than later.

I don’t want you to think my friends were the only good things about the Cleveland Comic Con. From my table in artist alley, I chatted with fans, signed a bunch of comic books, sold several copies of my award-deserving 1000 Comic Books You Must Read and other Isabella-written items, sold some other comics I had brought to the event  and also some Superman posters. I even sold the 25-to-30-year-old Superman cocoa and peanut butter I found in my Vast Accumulation of Stuff. So, not only did I have a great time at this convention, I came home with a few bucks in my pocket.

The Cleveland Comic Con crew seems to have a sincere desire to make their event as good as they can and they also seem to be willing to work hard to achieve their goal of growing the show. With that in mind, let me share a few comments.

The Doubletree isn’t the best venue for a convention that wants to grow. While there was a lot of open space in the ballroom serving as the dealers room, the artist alley room seems more than a little cramped and confined. I never got a chance to see if the wall that divided the two rooms could be opened. If it can be opened, I think it would greatly improve traffic flow and allow fans to move easily between the two areas. However, even if the wall could be opened, I think the convention will outgrow the Doubletree in another year or two. Indeed, it may have already outgrown it.

Cleveland Comic Con had a lot of enthusiastic cosplayers. I loved the costumes I saw. However, the cosplayers clogged the hallways of the hotel, especially when they and the fans were trying to enter the room where the costume contest was held. Those hallways could be a fire marshal’s nightmare.

I was pleased with the room where my panels were held. It was good-sized, bright and comfortable. The only problem I had with the set-up was that there were no stairs to the stage. At the start of my career, over four decades ago, I could have leaped on and off that stage with ease. At 63...not so much.

The pluses of the Doubletree was that it had free parking and lots of it. It had what seemed to be a decent in-house restaurant and was within a short walking distance of a couple good restaurants. During the show, there was a food table in the hallway outside the dealers room, and, for convention/hotel food, I thought the prices were reasonable. These pluses aren’t enough to make the Doubletree a suitable location for the future of the convention, but they are all elements which any new venue should have. You don’t want your attendees to have to sweat the small stuff.

The positives of Cleveland Comic Con outweigh my areas of concern.The promoters are smart guys who treated their guests and who put together a solid day of programming. I would happily return to the show next year.

Cleveland is one of the toughest markets for comics conventions in the country. Cleveland Comic Con has a shot at carving out a spot for themselves in that market. I wish them well.

Posted by Tony Isabella at 5:11 AM