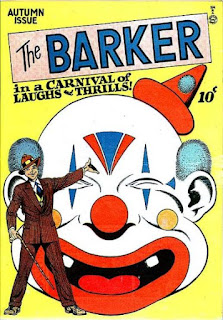 Most of you know I have a 200-plus-item bucket list of the things I want to write before I kick the bucket. However, I have another, less focused bucket list, which I have cleverly named “My Other Bucket List.” The items on that list include actual goals, flights of fancy, life-hacks and downright silliness.

I post each day’s item on my Facebook page and on Twitter. People seem to enjoy them, so, once a month, I compile them into a bloggy thing for your edification and entertainment.

October 1: Live in the French Quarter of New Orleans for a month. Spend a week living on a Mississippi riverboat.

October 3: Convince Hollywood to do a Home Alone reboot in which a grandfather (Morgan Freeman) is accidentally left behind when his family goes on vacation. #bestmovieever

October 4: Have lunch with and spend an afternoon talking with Bill Watterson about comics and stuff.

October 5: Learn about Italian comics artists, write about them and perhaps collaborate with them.

October 6: Make time to reread Kurt Busiek’s Astro City from the start to present. It really is one of the best super-hero series of all time.

October 7: Work out a reasonable business plan that will make my convention appearances profitable for me.

October 9:  Prepare for both the best and worst outcomes in current discussions; accept either with grace and dignity.

October 11: Reduce my online footprint by 90% for the rest of the month while I clear my schedule for new projects.

October 12: Convince a publisher to collect all the Barker stories from Quality’s National Comics and The Barker titles.

October 14: Watch the new Doctor Who series from start to current I watched the first couple years and, despite loving them, stopped. Bad move on my part.

October 15: In early 2016, rejoin LinkedIn to see if I can actually use it to further my publishing plans.

October 16: Find a diplomatic way to tell my Facebook friends that Thunderbirds isn’t as good as they remember.

October 17: Looking ahead to 2016, lose a pound a week throughout the year. This will be a challenge.

October 18: Looking ahead to 2016, write a one-page pitch every day for one of the items on my bucket list of things I want to write before I kick the bucket.

October 19: Go on a cruise with Sainted Wife Barb...despite having watched literally hundreds of killer shark and sea monster movies.

October 20: Spend a week in the writers room of either The Daily Show with Trevor Noah or The Nightly Show with Larry Wilmore. They are my favorite TV shows.

October 21: Buy every item listed in the monthly Previews catalog.This is more of a fantasy, than a bucket list item.

October 22: Visit the sets of Arrow, The Flash, Supergirl, Gotham, Agent Carter, Agents of SHIELD, iZombie and every other comic-book TV series. Because I’m an unapologetic fan.

October 24: Convince Marvel Comics to publish The Complete It! The Living Colossus: the pre-IT! tales, my run, and later appearances of the character.

October 25: Spend a week at a secluded cabin - close to some small-town restaurant, far from the Internet - with a stack of books. No legendary monsters or promiscuous teens would be a plus.

October 26: Convince someone to actually make a full-length movie of Hell, No: The Sensible Horror Film:

October 27: Read Bill Willingham’s Fables and all of its spin-offs from start to finish.

October 29: A Cleveland Entertainment Walk of Fame with the initial stars going to Bob Hope, Jerry Siegel and Joe Shuster.

October 30: Trick-or-treaters dressed as Black Lightning and Misty Knight coming to my house on Halloween. It’d probably be too cold for a Tigra costume.

October 31: Write a movie or TV script so good Dennis Franz would want to come out of acting retirement to be in it.

Posted by Tony Isabella at 6:03 PM