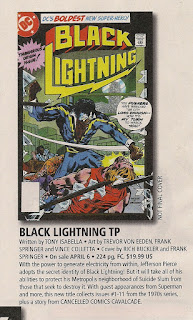 Black Lightning Volume One [DC; $19.99] is available for ordering in the current Previews catalog. Since before the catalog came out, I have been receiving e-mails asking me if I knew about this book and if I’m okay with it. Though I’ve covered all this in previous bloggy things, on Facebook and elsewhere, let see if I can sum up the situation:

I am very much okay with this book.

If I were smarter than we all know I am, I would probably leave it at that.  But I know there will be other questions and I might as well answer them all today.

DC Comics and I are still working out an agreement that encompasses all sorts of stuff. We’re not there yet. I expect we will get there before too much longer. During the “working out,” DC has shown its good faith and I’ve shown mine.

I was consulted on what this book would contain. Originally, it was just going to reprint my stories from the initial Black Lightning run. But my third-proudest creation - I have two children I adore more than I can say - is bigger than just Tony Isabella. So, with my blessing, the book will also contain the two issues written by Denny O’Neil after I left the first series.

I am asked if I will get my fair cut on this book. I will. DC has been terrific about such things in recent months. The more copies of this book sell, the more money I’ll receive, as will Denny and artists Trevor Von Eeden and Mike Nasser. As I told DC, I’ll never stand in the way of artists and other writers get their pieces of the Black Lightning pie.

Indeed, if this first volume sells well enough, it will be followed by Volume Two and Three. Originally, DC and I were discussing just one additional volume reprinting my second Black Lightning series. I thought about all the stories that were published between my two series and suggested we do a “middle volume” collecting those tales and some Batman and the Outsiders material. I don’t love all those tales, but what matters is that they will be available for the fans who want them.

The third volume would collected the entire second Black Lightning series, including the issues not written by me. Obviously, I think my stories are the best of that run, but, this way, the folks who worked on the book after my departure will get a few bucks. Working in comics is hard enough without my ego getting in the way of some writer or artist getting a check.

When DC and I have finalized our agreement, there will most likely be some brief joint announcement. Before and beyond that, I won’t have much to say. But I'm optimistic that, very soon, I will be to wear that new Black Lightning shirt I bought.

Thanks for having my back on this for so many years.

Posted by Tony Isabella at 8:44 PM