STILL NOT THE BEST AMERICAN COMICS 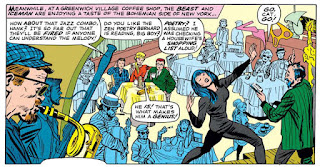 I knew I was going to have to write this bloggy thing. I knew there would be some blowback from what I wrote about the so-called “Best American Comics” a few days ago. I knew because I’ve been blogging a long time, well before we started calling it blogging.

Over at The Beat, a wonderful comics website, Heidi MacDonald, who I love, wrote this about what I wrote...

Here’s is a great throwback post as Tony Isabella goes on a tirade about how awful the comics in Best American Comics are because they don’t include Marvel, DC, Dark Horse, etc. I do love Tony, but this attitude is right out of the 80s play book.

“In the past when I’ve raised these issues, apologists for The Best American Comics have claimed they were unable to obtain rights to use mainstream material. It’s a lie revealed by the book’s “Notable Comics” listings, which include nary a mainstream story. No Usagi Yojimbo. No Lumberjanes. No Chew. No Ms. Marvel. No Daredevil. No Saga. No The Fade Out. No Fables. No Resident Alien. No any of the dozens of other mainstream comics that are better written and better drawn and more meaningful that 95% of what Kartalopoulos and Letham did include. Fuck them.”

Heidi’s comment makes me sad because it represents precisely what I find so “awful” about the annual collection. She is dismissive of my views and the non-included comics I listed. She mentions only the three leading mainstream publishers  and, in doing so, she has selectively edited what I wrote. She finishes by relegating me to the 1980s.

Here’s my entire quote about the non-included publishers:

“Series editor Bill Kartalopoulos makes his contempt and disdain for mainstream comics clear from his foreword. Letham reinforces that contempt and disdain in his introductions. Neither has any use for any of the well-told, beautifully-drawn comics stories from Dark Horse, DC, Image, Marvel, Oni or any of a dozen publishers, large and small, I could name.”

That “large and small” is an important part of my arguments against this anthology representing the best American comics.

As for my attitude being mired in the 1980s, that is demonstrably false. Let me ask you a question.

How many of the comics I mentioned in that paragraph could or would have been published in the 1980s? Usagi Yojimbo first saw print in 1984, so that one’s an affirmative. Daredevil by Frank Miller was cutting edge in the 1980s, so that’s another one.

The others? I think not, though I’m sure some will disagree with me on that score.

“We need an annual anthology that recognizes great comics by great creators ranging from Derf Backderf and Carol Tyler to Stan Sakai and G. Willow Wilson. And I think we all know I could list over a hundred such worthy creators.”

Is there anything in The Best American Comics 2015 that compares to Trashed or Soldier’s Heart? Neither of those great graphic novels were published by Marvel, DC or Dark Horse.

Take a look at my weekly “Tony’s Tips” columns for Tales of Wonder. Besides Soldier’s Heart and Trashed, I wrote very favorable reviews of

Invisible Ink: My Mother’s Secret Love with a Famous Cartoonist
Minimum Wage: Focus on the Strange
Louise Brooks: Detective
Killing and Dying
Religion: A Discovery in Comics
The New Deal
That’s just from November and December of this year. The list of non-Marvel, non-DC and non-Dark Horse titles would be much longer if I had the time to go back and reread all of 2015's “Tony’s Tips” columns and all of the year’s bloggy things.

If you need any further evidence my comics tastes are far more expansive than MacDonald claims, check out the last two chapters of my award-deserving 1000 Comic Books You Must Read. Lots of variety on those pages.

Confession. I went to Marvel for those examples because monolithic Marvel is the boogyman of the elitists.

I’ll put my commitment to diversity in comics on the line against the Best American Comics crowd any day. I enjoy and will continue to enjoy comics of all kinds, from all over the world and focusing on all sorts of subjects. My blogs and my columns support this claim.

The derision of those who disagree with me doesn’t change my firm belief that we need a better representation of great comics than Best American Comics delivers. As I wrote a few days ago:

My pledge. Right here and right now. I will buy such an [inclusive] anthology every year without fail. I will promote it in every venue available to me. I will do whatever I can do to make this concept a reality.

It’s not just time for such an annual anthology.

Posted by Tony Isabella at 5:53 PM