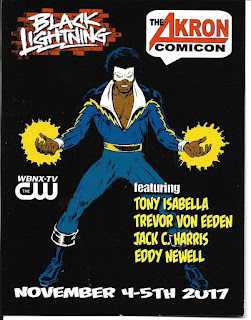 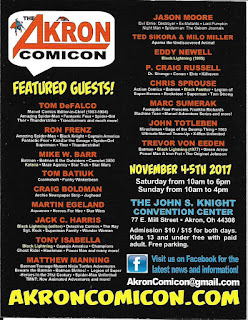 Bloggy thing readers know the Akron Comicon is one of my favorite conventions. It’s a comics-centric, family-friendly show that puts the fans first. The show runs 10 am to 6 pm on Saturday, 10 am to 4 pm on Sunday. Admission is $10 for one day or $15 for both days. Children under the age of 13 get free admission. Parking is free as well. This is one of the most affordable shows around.

I hope the Akron fire marshals don’t do any head counts and realize the event exceeds the maximum talent occupancy for one convention. Plan to come both days so you can meet all of these great talents.

Akron Comicon is an annual event established to promote newspaper comics and comic books as an original American art form and viable entertainment medium by bringing comic creators, dealers, fans and hobbyists together for a weekend of fun designed for the entire family.

Akron Comicon is not a pop culture event. We are a comic-centric event established to celebrate the comic art medium and the people who create it.

Our slogan - Fans First! Fans Always! is a statement about us. Our slogan characterizes our personal commitment to keeping the “comic” in “comicon” as a show about comics for fans of comics!

While our slogan acts as the foundation for Akron Comicon, the structure of the show is characterized in an additional statement:

Celebrating Comics Past, Comics Present and Comics Future!
WBNX-TV, Cleveland’s CW station, will be on hand with all sorts of cool swag from their stellar lineup of shows: Arrow, Flash, Legends of Tomorrow, Supergirl, Riverdale, iZombie, Supernatural and many others. If you thinking the fine folks from WBNX might also have swag from Black Lightning, the most anticipated new show of the mid-season, you’re probably pretty much on the mark. They are almost as excited about the Black Lightning series as I am. In fact, if all goes as planned, our Black Lightning comics contingent will be set up in close proximity to the WBNX booth. Which will make it easier for you to get your Black Lightning swag signed.

What will I be doing at the convention? Besides desperately trying to get around the floor to see all the other guests and the vendors? I know I’ll be hosting/moderating a Black Lightning panel. I might make appearances on other panels as well.

At my table, I’ll definitely be selling copies of Black Lightning Volume One, which collects the first run of Black Lightning by me and Trevor, and July 1963: A Pivotal Month in the Comic-Book Life of Tony Isabella Volume One. I’ll have a box of comic books written by me. I’ll have a very few of the double-sided Superman posters I helped designed for Cleveland’s International Superman Exposition in 1988. I will also have two boxes of books, comics and magazines from my Vast Accumulation of Stuff garage sales.

There is also a good possibility I will have several dozen copies of Black Lightning: Cold Dead Hands #1. I have an order of both the regular cover and the variant cover that - fingers crossed - should arrive in time for the Akron Comicon. Of course, since this first of six issues will be in comics shops as of November 1, I suspect some of the vendors will have copies as well.

There will be no charge for my signature at the Akron Comicon. If there’s a line at my table and you bring a lot of comics and other items for me to sign, I’ll sign a few and then ask you to step to the end of the line. I will definitely sign all of your books, but I want to keep the line moving.

Keeping in mind that non-disclosure agreements will prevent me from answering every question, I’ll do my best to answer those questions I can answer. At least until my voice gives out.

If you’re an aspiring artist who wants to show me your sequential comics art, and if the afore-mentioned line eases off, I’ll do my best to give you helpful comments. However, do not ask me to look at work that involves your original unpublished characters. That’s for my legal protection and yours.

Interviews and podcasts and the like? I’ll do them if I can spare the time from my table.

As I said, my signature and time are free. However, if they are at the convention, I would request you make a donation to The Hero Initiative. That’s a very worthwhile organization that helps comics professional - past and present - when they need some assistance in navigating financial and medical problems.

I hope to see many of my bloggy thing readers and other friends at the Akron Comicon. I know you’ll have a wonderful time.

If you are a convention promoter with an event scheduled in either of those months in a vacation-suitable venue, I’d consider adding one convention in each of those months. You would have to pay the airfare and hotel expenses for me and a traveling companion. You’d have to pay some sort of per diem for food. However, I would wave the appearance fee I will be charging most conventions in 2018 and beyond. I would also participate in two or even three panels a day at your event. If the convention wanted to schedule some exclusive event to recoup the money it’s shelling out for my appearance, I’d be good with that as well.

If no convention invites me in December and January, I have a back-up plan. I’ll rent a secluded cabin somewhere and invite a number of promiscuous young people to join me.

No. Get your minds out of the gutter. I figure if there’s a crazed killer in this secluded spot, that the promiscuous young people are the ones he’ll go after first. Come on, you’ve seen the same cheesy horror movies I’ve seen.

Theoretically, this will give me time to escape. Someone has to be the final girl. It might as well be me.

I’ll be back tomorrow with the first of two bloggy things on how and when and why to shut your electronic piehole.