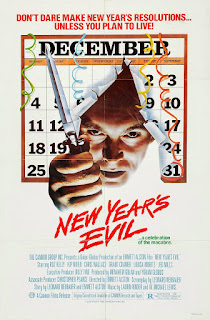 Sometimes I think there’s a horror movie for every holiday of the year. According to one online source selected at random, today has several holidays going for it:

Sure, I could research these “holidays” and see if I can find some horror movie that fits them. But that’s more work than I can handle after staying up all night on Monday to ring in the New Year. But I do have a pair of holiday horror movies for today’s bloggy. One is for New Year’s Eve and the other is for Christmas.

Our double feature commences with New Year’s Evil. The 1980 slasher film stars Roz Kelly, who is best known for playing Pinky Tuscadero on TV’s Happy Days. She plays Blaze/Diane Sullivan, an aging disc jockey hosting a televised New Year’s Eve countdown. Kip Niven is her husband Richard and Grant Cramer is their son Derek, who just landed the lead in a TV series. The movie was directed by Emmett Alston, who also contributed to the story, and written by  Leonard Neubauer. The movie is rated “R” for various reasons, including a few bare breasts not seen in the Comet TV version of the movie that I watched. They wouldn’t have helped the film.

During a New Year's Eve celebration, a Los Angeles disc jockey receives a phone call saying that when New Year's strikes in each time zone, someone will be murdered - and she will be the last one.

Before the disc jockey has any idea there’s a killer on the hunt, her assistant is murdered in her hotel room. The assistant’s head will make an appearance in an elevator shaft. It will not look like an actual head, living or dead.

Underplayed family issues come to the fore early on. Hubby Richard isn’t there yet. Son Derek is not getting the attention he expects from his mom. Mom Blaze is incredibly self-absorbed. Even the cop in charge of the case, who shows after the first murder, is kind of a dick. There’s exactly one likeable character in this movie, a cop assigned to be Blaze’s bodyguard and who talks about his wife and kids. That he survives the movie may be the only good thing about  this slasher shit show.

Blaze’s television party is not up to Dick Clark standards. It’s a small auditorium with what looks like a high school stage. The live music is performed by two bands - Shadow and Made in Japan - that I never heard of and couldn’t find online. Not that I looked hard. They kind of blew chunks.

The slasher calls himself “Eee-vil.” He records his murders on a cassette player and plays them when he calls the phone-in line at the televised countdown.

Eee-vil dispatches a few extraneous individuals, but his midnight slayings are all women. He kills a blonde nurse at a sanitarium and then a pair of women he picked up at a bar. He attempts to kill a teenage girl making out with her boyfriend in a car, but she escapes. There is no mention by any character that Eee-vil missed his eleven o’clock murder. Everyone is focused on either killing or protecting Blaze, who, by the way, is doing a terrible job hosting the show.

Hubby Richard is revealed as the killer. We don’t learn this until he gets past the police to sneak into Blaze’s room. He pretends to be the dutiful husband. Blaze asks him to find their son who she’s finally figured out is upset. Up to this point, the scenery-chewing Derek had been my pick for the slasher.

Richard chains Blaze up in the aforementioned elevator shaft. He plans to drop her to her death at the stroke of midnight. The cops show up and, in the exchange of gunfire that ensues, disable said elevator. Richard runs to the hotel roof. Rather than surrender, he throws himself off it. His body looks pretty good for someone who just fell several stories to his death. Son Derek cradles his dad’s body while looking around for more scenery to chew.

Blaze is put into an ambulance to be taken to a hospital. When we get a look at the driver, it’s Derek. The actual driver is dead on the floor next to him. Apparently, he takes after Daddy. I suppose we were supposed to be concerned about his mom’s fate, but, despite my respect for Happy Days, I wasn’t. I was more relieved that there was never a sequel. Because, demented as I am, I would have sought it out and watched it. I need help.

New Year’s Evil was one of countless holiday-themed horror movies that followed the success of Halloween. It isn't a good film. It's not even a watchable movie. Its Rotten Tomatoes “Tomatometer” rating is 14%. Its audience score is 14%. I think those might be on the high side. 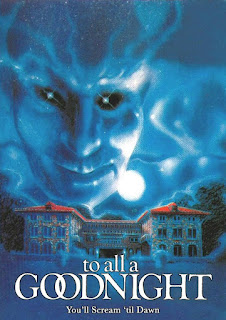 Only marginally better is To All a Goodnight (1980). This Christmas slasher film is directed by David Hess, who only directed one other film and who has a more lengthy resume as an actor. It was written by Alex Rebar. It stars Jennifer Runyon as Nancy, a first-year student at a girls finishing school where another girl died two years prior to the start of the movie. Runyon has been in several horror films - you’ll recognize her as the lovely student Bill Murray is hitting on in Ghostbusters - and was a regular on TV’s Charles in Charge. Here’s the Internet Movie Database summary:

A group of teenagers at a party find themselves being stalked by a maniacal killer in a Santa Claus costume.

More accurately, several finishing school students are going to be spending Christmas at their school. Some boys, including the very rich boyfriend of one girl, break the rules and show up. Also there for the holidays are the housemother and a creepy landscaper. If you’re thinking it sounds a little bit like Black Christmas (1974), you wouldn’t be wrong.

“Marginally better” might be a little harsh, but To All a Goodnight is so by-the-numbers it never engaged my interest. Recognizing Runyon from Ghostbusters was a highlight for me. When the student in the flashback goes over a balcony and dies, the body that hits the ground is so obviously a dummy that it lowered my exceptions from the start.

Promiscuous teens die as they must. Their fellows assume they are off being promiscuous and barely worry about them. Landscaper Ralph is set up as a red herring; it’s not until Nancy stumbles on his dead body that the presence of a vicious killer becomes known. The housemother calls the police. The chief of detectives arrives with two other detectives to investigate and protect the students. Which protection does not include the logical step of getting them out of the finishing school.

“Santa” is the housemother. It was her daughter who died two years earlier. To the movie’s credit, it tips this off by the presence of a photo of the girl on the housemother’s mantle. The twist ending is that there are two killers at work. The chief of detectives was the dead girl’s father.

Mom goes over the same balcony as her daughter and they didn’t use an obvious dummy this time. Dad gets skewered by a crossbow arrow, shot by the nerdy “final boy.” Nancy survives, as does another girl who has been driven mad by the sight of a classmate’s head stuck on her shower head. That mad girl dancing around in a nightgown while singing insanely is a pretty cool image.

To All a Goodnight is watchable. Once. It was rated “R” for some nudity - not seen in the Comet TV version I watched - and the usual gore and violence.

The IMDb users gave the movie a 4.8 rating, which I think is very generous. The Rotten Tomatoes audience score is 16%, which I think is somewhat unfair. This isn’t a movie I would recommend, but it’s not completely terrible.

I’m going to attempt to watch and review holiday horror movies on as regular a basis as I can manage. If any reader has suggestions for January and February, please e-mail them to me.