TONY GOES TO FREELAND: PART ONE 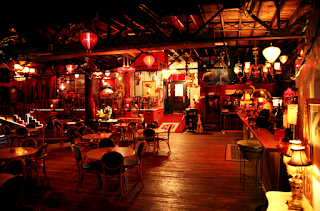 If it doesn’t get any better than right this minute, if I never get to write another Black Lightning comics story or any other comics story, if I never again stand in front of an audience to speak of the character and work that has defined my career, if I never again visit the home city of Jefferson Pierce and his family, if this is it, the finale, the slow walk away from the things I love about the comics industry, then, you know, it’s okay.

I’ve had success other comics creators dream of achieving. I have created iconic characters that entertain and inspire. I’ve written great stories and worked with great artists. I’ve seen my proudest creation turned into an amazing hit television series by actors and crew members and directors and producers and writers who embraced my vision for that creation.

We’ll swing back around to these semi-gloomy thoughts when I reach the last chapter of this multi-part series of columns about my trip to Atlanta to attend the Black Lightning second season wrap party and then two of the final days of shooting of that second season. Before that last chapter, there will be much joy to share.

Contrast. Without any prior communication from me, Marvel brought me out for the Luke Cage premiere in Harlem, the Ant-Man and the Wasp premiere in Los Angeles and other screenings in New York. My fondness for the company where I started my career continues to be part of me.

I looked at my bank account and decided I would do this thing. That I would travel to Atlanta on my own dime to spend some time with a group of people who mean so much to me that I consider them to be part of my family. I love them all madly. However, if they all come to Thanksgiving, I will need to buy a much bigger house.

I flew from Cleveland on a direct Delta Airlines flight to Atlanta. I didn’t get my preferred aisle seat, but I was in the middle of an exit row. The major pluses of that was I had more room for my tiny hobbit legs and the seat in front of me could not recline.

Grumpy old man pronouncement. I don’t think airplane seats should be able to recline. A passenger has little enough space as it is; they shouldn’t have it diminished further by the inconsiderate lout in front of them. Get off my lawn, you rotten kids.

From the airport, it was a quick yet still expensive taxi ride to the Hilton Garden Inn in midtown Atlanta. I’ll tell you more about it tomorrow. I’ll also tell you about a terrific Chinese restaurant less than a tenth of a mile from the hotel. For now, though, we’ve got a party to attend. 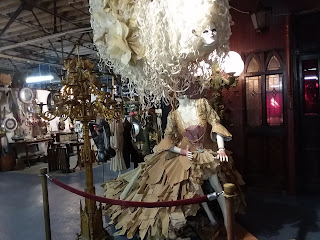 The Black Lightning wrap party was held Saturday night, January 5, at Le Maison Rogue@Paris on Ponce. The Paris part of that contains over 46,000 square feet of art, antiques, furnishings, ateliers, boutiques, and oddities. I was simultaneously drawn to and repelled by the Marie Antoinette piece located just outside party venue. I arrived around a little after the event’s 7 pm start time and soon realized that almost no one shows up at these things that early in the evening. 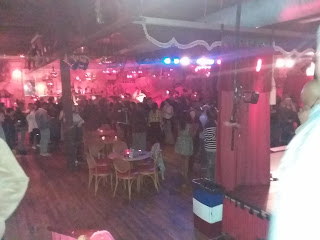 Folks started to trickle in with a few of them giving me the once-over until they realized who I was. I apologize for not being able to identify every person I met at the party and on the set. I made the conscious decision not to take notes and photos. Sure, I could have recorded my adventures, but I wanted to experience them fully. Next time I attend something like this, I’ll bring a plus-one to take those notes and photos for me.

Everything about the party was cool. The venue was twisted enough to be unforgettable. The DJ on the stage kept things hopping. The food was delicious. Best of all...the people.


Jamon is a name you will be hearing a lot in the future. He's Salim's assistant and he's done me dozens of courtesies in the two years I've known him. He's also a writer who co-wrote episode ten of this second season. 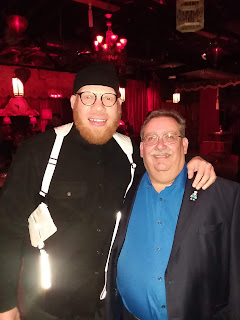 Marvin and I chatted quite a bit during the evening. He is such a glowing beacon of joy. That he can somehow pull Tobias Whale out of  somewhere is incredible to me. I’ve said all along that Marvin is worthy of an Emmy nomination for his performances in that role. 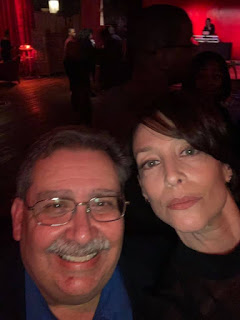 Jennifer Riker, who has been playing the detestable Dr. Helga Jace  on the show, is also nothing like her character. She’s friendly and so much lovelier than the doc. Until she introduced herself, I did not recognize her. I told her she was (expletive deleted) evil and I loved her. Her response was a hug and a kiss. Some of the better photos in today’s bloggy thing were taken by her. 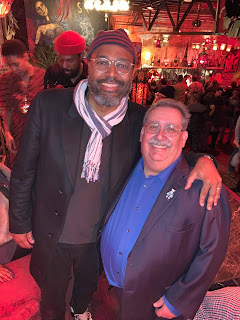 Series creator, director, producer and writer Salim Akil was there, as was director Oz Scott. As I’ve said online, the love and respect I received from everyone involved in the Black Lightning show has been as life-affirming as anything I’ve ever known.

Oz got up on the stage to address the attendees and thank them for all they do to help the cast, directors and producers and make the show. It’s a mutual respect I would see over and over again when I was on the set Monday and Tuesday. 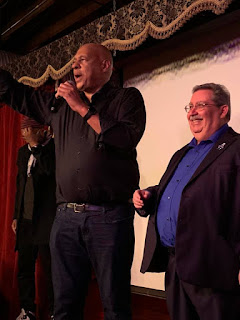 Then, much to my surprise, Oz announced that there were two Black Lightning creators in the house. Besides Salim Akil, the original creator of the Black Lightning comics was at the party. To my even greater surprise, he asked me to address the crowd. 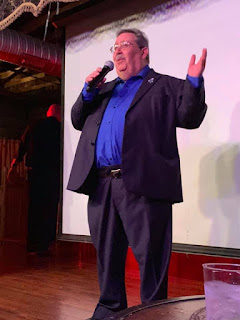 I hadn’t prepared anything, but how could I pass up the chance to tell this wonderful group of people how much they mean to me and to Black Lightning fans everywhere? Going from my doubtless challenged memory, here’s what I think I said:

Looking out over this group of happy, creative, talented, dedicated people and realizing you all have jobs because of something I wrote forty years ago is more surreal than I can describe. I see so much of myself in this show and cherish how much all of you have added to characters and stories that mean so much to so many. Every time my family and I watch a new episode, I feel like you have given me a wonderful special present. I consider all of you to be part of my extended Black Lightning family. I love you and I thank you for all your hard work. You mean the world to me.

I got a round of applause. Later that evening, China would tell me what I said was beautiful and thank me for it. So would Marvin and others. That’s when I first felt I was part of the show, a feeling that would be enhanced during my time on the set.

Salim followed me on the stage and also thanked everyone for their dedication and hard work. The cast members who were present did the same, emphasizing how their performances are enhanced because the crew and their fellow cast members lift them up.

That’s at the core of Black Lightning. Good people sharing values who lift each other up. I am so proud to have created the character and so proud to be a small part of this show. It’s a responsibility I will never take lightly, much to the annoyance of certain folks who don’t understand Jefferson Pierce as well as I do.

After the speeches, there was more delightful hanging out with the cast and crew. I stayed at the party until maybe eleven, exhausted by everything I’d had to do before I flew to Atlanta and the flight to the city. I called Lyft and headed back to my hotel.

Sunday was not a working day for the Black Lightning cast and crew, so I would have a day of rest before hitting the set. It will be a mite short on Black Lightning content, but tomorrow’s bloggy thing will tell you what I did that day. See you then.

Posted by Tony Isabella at 7:57 AM