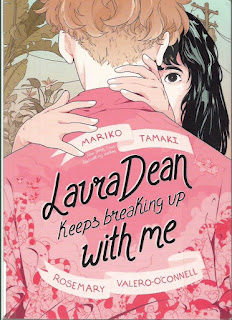 Digging into the comics waiting to be reviewed pile...

Laura Dean Keeps Breaking Up with Me by Mariko Tamaki with artist Rosemary Valero-O’Connell [First Second; $17.99] tells of a young woman whose toxic relationship with her girlfriend takes a toll on not just her, but on her friends. I’m not going to lie here. This is an incredibly difficult graphic novel to read. We all know folks who stay in relationships long past any reasonable expiration date, suffer horribly because of them and yet still return to them time and time again. In this story, it’s a romantic relationship. But it has applications for other kinds of relationship as well. Hell, I should write my own graphic novel called DC Comics Keeps Breaking Up with Me.

Frederica Riley is someone who is easy to like, which makes it all the more painful when her dream girl turns out to be a nightmare. A recurring nightmare. Laura Dean is manipulative and totally self-centered. She expects more from Frederica than she is ever willing to give of herself.

Tamaki writes these characters with obvious insight. They and the supporting players are more than fictional constructs. I wouldn’t be surprised to meet them in real life. Valerio-O’Connell captures all the myriad emotions brilliantly. I’ll be very surprised if this graphic novel doesn’t land a bunch of nominations in the next batch of comics awards. Definitely recommended. 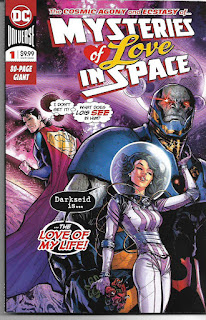 Mysteries of Love in Space #1 [$9.99] is one of those wacky one-shots DC Comics publishes from time to time. The quality of the material is often uneven, but I’m a pushover for anthologies with weird-ass themes. I wish I’d be invited to participate in them because I can be as weird as the next creator.

There are some first-rate stories in this anthology. Writer Saladin Ahmed and artist Max Dunbar do a heartwarming sweet Bizarro story in which the character encounters someone who really gets him. Nice coloring by Paul Mounts and lettering by Dave Sharpe add to the joy I received from this story.

Space Cabbie, who used to appear in short stories in the DC sci-fi comics of the 1950s and 1960s, is a longtime favorite of mine. I’m not sure what his deal is in the ever-changing DC Universe, but I got a kick out of “GPS, I Love You” by Aaron Gillespie with artist Max Raynor, colorist Hi-Fi and letterer Sharpe. The story is kinda on the freaky side, but I liked it. Needless to say, I could write the heck out of a Space Cabbie series.

The best story in the issue is Lois Lane and Superman in “Glasses” by writer Dennis Hopeless, penciller Tom Grummett, inker Cam Smith, colorist Adriano Lucas and letterer Tom Napolitano. The tale has a nice take on the Lois and Superman relationship. It should receive a nomination in next year’s comics awards. It won’t because most of those awards ignore the mainstream, but it should. 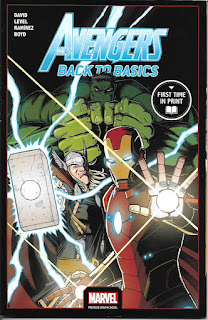 Avengers Back to Basics by Peter David with artists Brian Level and Juanan Ramirez [Marvel; $14.99] is the first time in print for the graphic novel that was originally published digitally. It’s a time travel story that gets its heart from Kamala “Ms. Marvel” Khan as she gets swept up in and into Avengers history...and it’s a history that could be rewritten to dire effect.

Though I’m not generally a fan of time travel tales, I thought this story played to David’s strengths. He got to write the Avengers at various points in their lives while playing with some key events in Marvel Universe history. He did an excellent job with Kamala Khan, which is important to me on account of she has become my favorite Marvel Comics character. There are some shocking twists in the GN, all leading to a satisfying ending.

The art and storytelling are first-rate. The styles of the artists are similar enough that I didn’t even realize which of them had done which “issues” until I checked the credits for this review. Color artists Jordan Boyd and Erica Arciniega used their hues to tell the story without overpowering either the writing or the drawings. Letterer Jimmy Betancourt of Comicraft did good work as well.

All in all, Avengers Back to Basics is a solid super-hero thriller and plenty of personality. I enjoyed it. 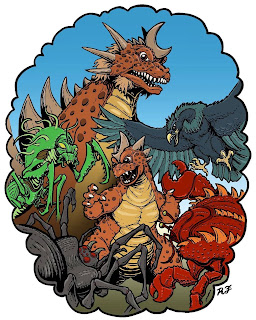 You already know I’m going to G-Fest this week and Comic-Con next week. I have some other conventions and garage sales scheduled for the rest of the year:

August 9-10: Vast Accumulation of Stuff garage sale (9 am to 1 pm on each of those days)

September 21: Flaming River Con. I’m not a guest of this Cleveland event. I’m going to show my support for the LGBTQ+ comics community in my old home town. If I can get my hard-working wife to take some time off, I might even make a downtown Cleveland weekend of it.

I may try to squeeze in one more Vast Accumulation of Stuff garage sale in early September. I’d also be available to be a convention guest in September, October and December. If you’re a show promoter who would like to book me for one of your shows, e-mail me for my appearance requirements.

If you’d would like me to speak at your college, library, school or other venue, the same holds true. I can talk about modern comics, comics history, diversity in comics or my career in comics. E-mail me for my appearance requirements and availability.

I’ll be hitting the road for G-Fest tomorrow morning, but I should be able to write and post a short bloggy thing before leaving. See you then.

Posted by Tony Isabella at 2:33 AM