G-FEST XXVI Part One: Still Better Than the Dan Ryan 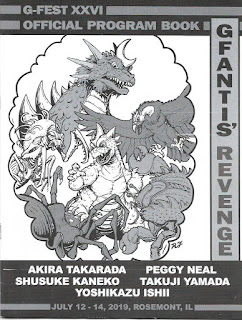 If you’ve missed my previous G-Fest bloggy things, here’s the basic information from the event’s website:

G-FEST is the largest regular gathering of Godzilla and Japanese monster fans in the world. Held each summer, it typically attracts more than 1000 attendees, but has seen a gradual increase in attendance over the past few years. G-FEST 2018, its 25th anniversary, was the most successful convention to date, bringing in more than 3000 Japanese science fiction and fantasy film fans!

G-FEST is a family-oriented convention which caters to a wide variety of interests within the kaiju genre. G-FEST features presentations and Q & A sessions by actors and crew from the Japanese Godzilla films, fan presentations on topics of interest, contests and gaming, new and classic kaiju movies, the western world’s largest kaiju-oriented dealers room, and lots of fun and camaraderie.

In addition to the many activities at G-Fest itself, the glorious Pickwick Theater showed kaiju films Thursday afternoon and evening, Friday evening, Saturday evening and, on Sunday evening, Linking Love, a recent example of Shusuke Kaneko’s non-kaiju work. If you were too tired to leave the hotel, you had only to go to your hotel room where, from Thursday morning through Monday morning, the in-house TV channel showed a variety of programs from full movies to episodes of television shows to documentaries.

I wanted to mention all of the above in case I forget to mention it in later installments of this multi-column convention report. This convention deserves all the kudos I can give it.

Thursday was fairly uneventful. I was working on the notes for my Cheesy Monsters Raid Again panel in the morning, finishing a couple hours before my son Eddie arrived. As in past years, he was doing the driving. We made pretty good time, better than in those past years. That was thanks to us not taking the Dan Ryan Expressway for a change.

Driving through Ohio is fairly pleasant. We have nice rest areas. We have toll stations that usually work efficiently. That goes out the window when we hit Indiana and Illinois with their frequent and frequently inefficient toll stations and generally inadequate rest areas. Even when the drive through those states goes well, I always know I’ll be facing eleven and a half miles of Hell before I get to whatever event I’m attending in Chicago suburb Rosemont, be it G-Fest or, back in the day, the Chicago Comic-Con.

Hell is another name for the Dan Ryan Expressway. Those eleven and a half miles take a hour to drive and it’s bumper-to-bumper slow. It’s as if some mystical madman transported part of the Los Angeles highway system to the Midwest. In the case of Los Angeles, you have all Los Angeles and its surrounding areas offer. In the case of the “Damn Ryan” (which I started calling it by the second time I had to drive on it), all you have is downtown Chicago and factories and, I assume, suburbs bordering some evil Hellmouth. I like Rosemont a lot. It’s getting there I hate.

Godzilla smiled on us this trip. Somehow, the Google Maps app on my son’s phone took us away from the Dan Ryan and onto other highways. It wasn’t any wondrous drive through the park, but it was still better than the Dan Ryan. We didn’t keep exact track, but I think we cut a half-hour off the trip. Alas, this was probably some kind of fluke portal we will never encounter again. 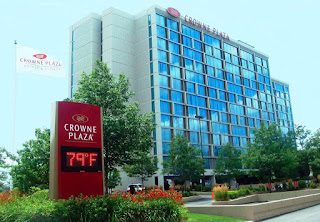 My “Damn Ryan” hate always dissipates when we reach G-Fest’s home, the Crowne Plaza Chicago O’Hare. This hotel has been the convention site for many years. They love hosting G-Fest and treat the event with respect. It can be difficult to book your room at the hotel because it sells out the rooms allotted to the convention swiftly, but there are many other nice hotels on the same street. I think I stayed at all of them during my Chicago Comic-Don years.

Our room was very nice. Those of you who have read my hotel rants in previous convention reports know what I look for in such rooms. Our beds were comfortable. There was natural light when he wanted it. We had a safe and a refrigerator. The housekeeping was first-rate. The only drawbacks were that the bathroom was a little small  and our floor’s vending machine kind of a joke. Over all, though, I would give high marks to our lodgings. I’ll talk about the hotel in general in the next chapters of this G-Fest report.

Whenever we come to Chicago, Eddie’s goal is to eat his weight in Italian beef sandwiches. His quest to become a half-man, half-beef creature took us to Portillo’s. I had a breaded chicken sandwich on account of I already carry far too much beef. 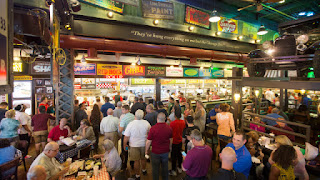 I like Portillo’s. The food is terrific and reasonably priced. It has lots of table. Its decor is old-school advertisements and many other knickknacks and photos. I expect to go back there year after year as long as I’m attending G-Fest or in the unlikely situation of my being invited to the various Chicago comics conventions that take place in Rosemont locales. 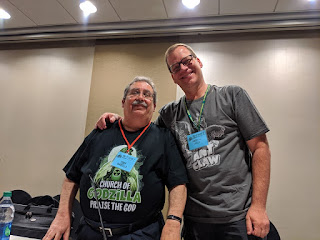 After dinner, Eddie and I were able to get our badges and program books. We saw our dear friends Martin and Pam Arlt. Martin has an incredible collection of kaiju-appropriate t-shirts. He’s handsome enough to be a kaiju t-shirt model. Of course, being as how a great many kaiju t-shirts are bootlegs, appearing in the pages of GQ is likely off the table for him.

Eddie and I stayed in Thursday night. I wanted to be rested for my Cheesy Monsters Raid Again presentation. A previous year’s panel on the Monsters of the Syfy Channel was a hilarious hit, but it always takes me a while to get “into character” to star in such a panel. I’m not a natural showman like my late friend and mentor Stan Lee, but I can channel him for presentations like this. 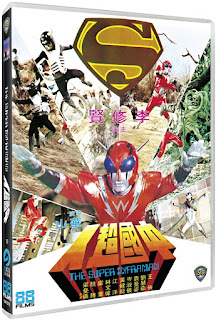 We watched bits of pieces of several movies on the hotel’s In-House TV Channel. The two I can remember were Gamera Vs. Gyaos, the 1967 American International dub shown on American television as Return of the Giant Monsters; and The Super Inframan, a Hong King science-fiction action movie produced by the Shaw Brothers in 1975. It was kind of a knockoff of Ultraman, but I wouldn’t mind seeing the full version of it. I’ll be on the lookout for that.

That’s my prelude to G-Fest XXVI. My report on the first day of the convention will be coming your way soon. See you then.