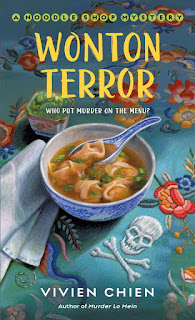 Wonton Terror: A Noodle Shop Mystery by Vivien Chien [St. Martin's Paperbacks; $7.99] is the fourth novel in the series. There are a couple of things I’ve learned from reading this books. Lana Lee, the manager of the Ho-Lee Noodle Shop, has never met a murder she didn’t want to investigate, even though her investigations are sure to put her in mortal jeopardy. That’s the first thing. The second is that not even murder stops Cleveland’s Asian Market from whatever events the business community has planned.

In this book, the Asian Night Market starts with a bang as Wonton on Wheels explodes, killing its owner. Lana and her chef Peter are not seriously injured, but Lana is determined to uncover who killed the competition and why. Naturally, this concerns Detective Adam Trudeau, but, to his credit, the man is accepting this is part of the woman he loves.

In addition to the murder mystery, we get some Lee family drama as Lana’s aunt comes to visit. Her mom and her aunt have been picking at one another all their lives. It almost makes risking one’s life seem like the safer option.

Wonton Terror is an enjoyable read. I’m wondering how long it will take for some television studio to realize these books would make a great series. 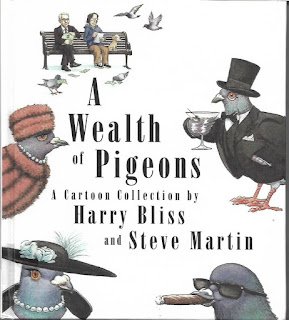 Harry Bliss is one of my favorite cartoonists. I get a kick out of his covers and interior cartoons for The New Yorker and his single-panel syndicated feature “Bliss.” That he is a comic-book fan just adds to my delight. In fact...

SIDEBAR. Bliss is the only New Yorker cartoonist who’s ever showed up in one of my dreams. We were chatting at some convention. He looked like he had drawn himself. I looked like Sergio Aragones had drawn me. Bliss asked me to write a weekly panel called “Bliss’s Heroes” in which he would draw his favorite comics characters and I would write gags for his drawings. END OF SIDEBAR.

Bliss does have a well-known collaborator who many consider to be even more hilarious than myself. I didn’t know this until I read A Wealth of Pigeons: A Cartoon Collection by Harry Bliss and Steve Martin [Celadon Books; $28]. The 272-page hardcover contains lots of cartoons by the delightful duo.

The way this team-up works is that sometimes Bliss draws a cartoon for Martin to write and sometimes Martin dreams up with a cartoon for Bliss to draw. Some of the cartoons are dryly humorous and some are laugh out loud hilarious. It’s a nice mix of cartoons and short strips with a wonderful cover design by Chip Kidd. I read about 20 gags a day and it was always a nice break for the insane pandemic and political world in which we live.

Bliss is a treasure and I recommend this book highly. And, should he see this review and he’s not repulsed by working with a writer who looks like a Sergio Aragones drawing, I’d be absolutely up for working on that comics character feature with him. 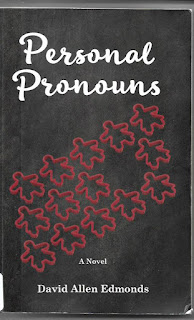 I have mixed feelings about Personal Pronouns, a 2017 mystery novel by Ohio author David Allen Edmonds [Snowbelt Publishing; $15.99]. Protagonist Joe Lehrer, a German high school teacher grieving the horrific death of his wife in a auto accident, is very interesting as he wrestles with that grief, his return to the classroom and an insane plot involving sinister school board members, prostitution, various political plots and too many murders to be believable for this reader.

Lehrer strives to be moral, but he is sorely tested by the madness of the plot unfolding before him. He is the high point of the book. The writing itself is inconsistent, though I give Edmonds props for two truly chilling scenes. In the first, Lehrer recounts the death of his wife before his very eyes. It’s gut-wrenching.

In the second, he and a woman he is becoming involved with, return to her home to find all her furniture has been rearranged. That’s a creepy and unusual intimidation technique. Edmonds makes what is happening clearer when she walks into her bedroom to find all her family photos and such slashed and laid out on the floor.

The more I read, the less I cared for this book. The crimes seemed unlikely and the reasons for them even more so. Nor did it end on a satisfying note. It came off like the first half of a book. Given there’s a sequel, that may well have been what Edmonds planned from the start.

I’ll read the sequel, hoping for a more satisfying conclusion, but I can’t really recommend this novel. 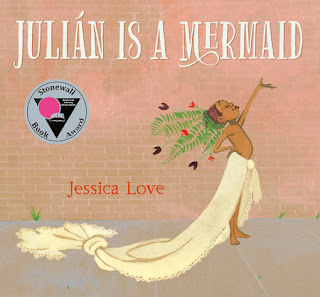 Julián Is a Mermaid [Candlewick; $16.99] is a charming kids book by illustrator and stage actress Jessica Love. This is her first book. Here’s a summary:

While riding the subway home from the pool with his abuela one day, Julián notices three women spectacularly dressed up. Their hair billows in brilliant hues, their dresses end in fishtails, and their joy fills the train car. When Julián gets home, daydreaming of the magic he’s seen, all he can think about is dressing up just like the ladies in his own fabulous mermaid costume: a butter-yellow curtain for his tail, the fronds of a potted fern for his headdress. But what will Abuela think about the mess he makes — and even more importantly, what will she think about how Julián sees himself? Mesmerizing and full of heart, Jessica Love’s author-illustrator debut is a jubilant picture of self-love and a radiant celebration of individuality.

Recommended for ages 4-8, this book will likely be a hard sell for conservative schools and libraries because it is such a wonderful celebration of acceptance. They should get over their close-minded ways. Maybe putting this book on their shelves will make them more open to the changing world around them. This is an award-deserving work and I recommended it without reservation.

If you want to comment on these bloggy things, which I would love for you to do, be aware that all comments have to be approved by me before they post. I do my best to get to them as soon as possible, but don’t be concerned if your comment doesn’t appear right away.

Posted by Tony Isabella at 4:05 PM